The police about to go on duty.

For those without comedic tastes, the so-called experts at Wikipedia have an article about The Police.

The Police were an English post-post-post-punk combo with a sideline in cod reggae. Known for their numerous feuds with rap groups from the growing Compton scene, their lineup consisted of Sgt. Buzz Sting, Officer Andrew Summers, and Officer Stewart Copelandson.

The trio joined the LAPD in 1977 and solved high-profile crimes, such as the Roxanne Prostitution Case of 1979, the disappearance of a man who sent the officers a message in a bottle, the arrest of a teacher who was getting too intimate with one of his students, and the finding of a young man kept writing stalkerish letters to his girlfriend. 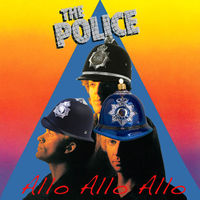