“There is only one thing worse than being Finnish, and that is not being Finnish. Fortunately, all of Nightwish's members are Fin... oh.”

“Tuomas is a real poet. Although, I do especially like Marco's line in Planet Hell... It went something like "ARGHARFRAGAIRY!!!"...Yeah, that was it.”

Nightwish is a four and a half person representation of the life of Tuomas Holopainen, soon to be a feature length film. Founded in 1996, by Holopainen (then aged eight) and a couple of other less important members, Nightwish first achieved international success in 2005 when they controversially fired their lead singer. In 2007, their existence was once again acknowledged through the appointment of Anette Olzon as lead vocalist, a decision proving to dislodge the final lynchpin of civil unrest and anarchy between Nightwish fans. Much internet credibility and Danish pastry has been lost in the four years following, although a recent report into the drama of the Nightwish saga has suggested that nobody actually gives a crap.

Being a country of few people (approximately 12) and little to do, Finland has a habit of causing hallucinations in those that drink from its water. One such hallucination appeared to young Tuomas on one particularly drunken night in 1896. Tuomas, who was being accompanied by his 547-year old elven minion, Yomppu, fell to his knees and proclaimed that Walt Disney had appeared before him and instructed him to form a musical group, the likes of which no mortal man had ever come across before. However, before Yomppu had time to react to this bout of madness, Tuomas had fallen under a deep stupor. On his way to the floor, Tuomas crushed poor Yomppu and fell into a 100-year slumber. Yomppu died, tragically.

A century later, when Tuomas was awoken by true love's first kiss, or rather, a mandolin-playing descendant of Yomppu, named Emppu, the madness had not yet appeared to pass. Just as Tuomas was about to explain his vision to the fair-headed elf, a gigantic white fish leapt ferociously out of one of Finland's many lakes, threatening to gobble up Emppu's head. Emppu, already being only 3'9 (considered quite tall for an elf) could not afford to lose any more height and was about to be subject to a brutal, watery death, when Tuomas intervened, shouting "WHITE FISH!". Due to Tuomas' strong Finnish accent, and Emppu's poor grasp of the English language, the phrase "Nightwish" was born. The newly-found best friends immediately formed a band, and acquired two other members from a local carnival, a lady dressed up as a banana and a stick-banging ninja, who quite unusually was born with a bandana instead of hair.

Four years later, Tuomas thawed out an ancient Viking warrior, named Marco the Wielder of Socks and Sandals, who had been frozen in glacier ice for approximately 1300 years. Marco spared the band members their lives and agreed to play the electronic bass guitar on the grounds that he could invade, rape and pillage British villages whenever he pleased.

And so Nightwish was complete.

Nightwish, only pawns in the game

The true story of how Tarja came to be fired from Nightwish is one of much speculation.

Tuomas' Perspective: "Tarja never listened to what I told her. Neither did she read what I wrote her or listen to what we played. Far too often, I felt that she let in what the world said. I feel that we came a long way just to feel her hatred, and were eventually just pawns in the game. How blind can she be? Doesn't she see? She's chosen the long road, but we'll be waiting. Also, she went off with that Argentinian bloke. I didn't like him. He thought he was prettier than me."

Tarja's Perspective: "Who needs musical instruments anyway? My voice is all-powerful!" [between sobs]

Emppu's Perspective: "Tarja never treated me like a real person. Eventually the midget jokes just got too much.

Jukka's Perspective: "I think we might have had a bit too much to drink that night. Tuomas and I were sat around drinking Finnish vodka when we decided to send out a few prank hand-written letters. We might have accidentally fired our lead singer."

Marcelo's Perspective "I would have gotten away with it too, if it weren't for those meddling kids" 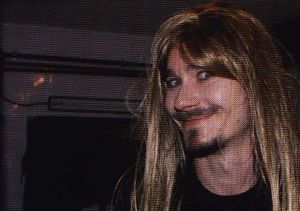 Unfortunately, Tuomas' attempt to audition for the new Nightwish singer was foiled

Following Tarja's departure, the remaining members of Nightwish came to realise that they no longer had a female member and that the lack of two X chromosomes would be a severe disadvantage in the aesthetic promotion of future records. To add to this, Tuomas would not be able to pass as a girl for very much longer, since he had a beard. It was therefore decided that auditions for the lead vocalist would have to be held. During this time, tensions within the band reached a peak, mainly due to Tuomas' persistent attempt to audition for the role using various different disguises. Eventually, due to the fact that a substantial proportion of the Finnish population was already in Nightwish, the try-outs were taken to the next closest country: Sweden. It was here, that a relatively young Swedish mother accidentally found her way into the audition room, skipping merrily whilst simultaneously constructing a daisy chain. Upon first sight of this lady, it was clear that she could not be a frontwoman for Nightwish - she was over 30 and had fair, blonde hair. However, before any one of the other members of the band could protest, Tuomas had brutally attacked the fair maiden with black hair dye and a denim mini-skirt. The transition was complete.

90% of Nightwish songs are about Tarja or sex. The remaining 10% are an attempt to hide this by incorporating references to childhood innocence, Disney and fictional characters.

In the latest episode of Nightwish: The Soap-Opera, Anette becomes the latest member to defy Holopainen. The exact reasons behind this are unknown, but it is thought that huge amounts of phlegm were involved. For the remainder of the tour, the band has asked the floor to take her place. The floor, being a solid presence at 100% of Nightwish shows so far and therefore used to being walked all over by fans/the band, kindly obliged.

Q: When will Tarja come back?