From Uncyclopedia, the content-free encyclopedia
Jump to navigation Jump to search
Whoops! Maybe you were looking for Egocentrism?

“These guys are as stupid as their most pretentious fans.”

Emerson Lake & Palmer, or ELP as they prefer to be called, are an English trio of show-offs, formed in 1970 when Keith Emerson was kicked out of The Nice, for not being nice enough to his bandmates. He recruited Carl Palmer, and they were soon joined by Greg Lake, who ran away from King Crimson after an album and a half. The three originally invited Jimi Hendrix into the band, but as soon as Jimi received the invitation, he killed himself with a sleeping-pill overdose to avoid the three maniacs.

ELP were remembered for having very high opinions of themselves, for using Moog synthesizers and for ruining progressive rock. They split up in 1978 when they realized what they had done Emerson read what the critics had to say about his band. The band has tried to reunite a few times since then, but unsuccessfully, mainly due to Emerson's overinflated ego. 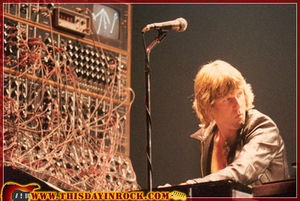 Keith Emerson, with his relatively simple Moog Synthesizer next to him

For those without comedic tastes, the so-called experts at Wikipedia have an article about Emerson, Lake & Palmer.

ELP were the first not to mention only progressive rock supergroup, since all of the members had already gained considerable fame. Keith Emerson for example, was in this band called The Nice, although they really weren't nice. Keith Emerson - also not being so nice - was an angry-psycho-candy store owner-megalomaniac infamous for stabbing his keyboards with large daggers, something his psychiatrist encouraged, because it was a relatively safe way of venting out the frustration Emerson suffered from.[1] The hyperactive Carl Palmer was a well known drummer/junkie, associated with psychedelic bands like Atomic Rooster and The Crazy World of Arthur Brown. He would constanly do drugs and pass out on stage, even though the drugs he was taking was actually a bottle of Advil, and that he "hallucinated" that Arthur had a crazy mask on (Arthur was actually the druggy, thinking he was king of Auisdrghil, a far away land were people constanly watch you, and people are always behind you overdosing on Advil). Greg Lake was famous for lasting more than one album with King Crimson.[2] Greg Lake quit after Robert Fripp-Trip-Pip wouldn't let him drink any Ginger Ale for his tummyache.

The trio's first album was a showcase of the members' enormous musical virtuosity, but especially their massive egos, as suggested by the very title - Emerson, Lake & Palmer (the most orginal name I could ever think of! It's not like Kansas, Black Sabbath, Led Zeppelin, The Doors, or Boston ever did it!). It was famous for containing lots -and I mean lots of keyboard solos, a drum solo, some song about a Pebble, and even a ballad by Greg Lake, called UnLucky Man. The ballad was autobiographical, and it documented his transition from singer/bassist in an underground band with a small cult following to his current status as singer/bassist superstar in a supergroup. 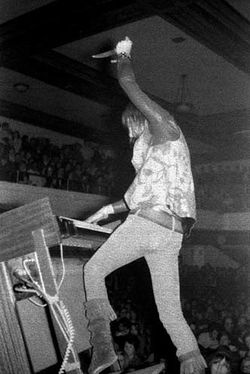 A photo of Keith Emerson sacrificing his Hammond Organ to the Ancient One Actually, not really, it was just his anger management.

Their second album, Tarkus, was considered a huge evolution for the band: Their egos had grown and as a result the songs got longer, keyboard solos more frequent and complicated, and Emerson was generous enough to let Lake play some guitar on the title track, and lots of LSD and PcP were taken. The lyrics, as with the first album were written by Lake, who was highly influenced by science fiction and westerns at the time. One particularly interesting song is Are You Ready Eddy? which predicted the rise of a highly influential band. This song gave birth to the theory that Greg Lake came from the future, which would also explain the song A Time And A Place. But the album is best remembered for its cover art, which featured the offspring of a tank and an armadillo in a very colourful landscape. It was during the following tour, in the year 1971 that Emerson started raping and/or destroying Hammond organs during live performances, which suddenly increased the bands popularity. More and more people started coming to their concerts to witness (and occasionally participate in) these orgies, which made the three very wealthy men indeed. As a result Emerson bought several dozen synthesizers and organs, and Palmer decided to expand his drumset to include 42 cymbals, 13 tom-toms, 3 bass drums, 3 snare drums, a 4 Chinese gongs and a bell, which he would play by pulling a rope with his mouth. Greg Lake bought an elegant persian carpet and an electric guitar, which Emerson actually let him use on one of their albums.

The trio soon came close to bankruptcy, because, apart from the all the expensive new instruments they bought, they also had to pay an army of roadies and truck drivers to transport all this equipment when on tour.

“Of course I didn't make mistakes on Pictures at an Exhibition! Being recorded live, sometimes my voltage-controlled Moog synth played the wrong notes, because of power-supply problems! I'm Keith Emerson! I don't make mistakes!”

~ Keith Emerson on Pictures At An Exhibition

Their next album was meant to prove that the band members were educated people, so they recorded themselves playing fast-forwarded classical music on stage. The result was elitist crap. Keith Emerson even made mistakes, as pointed out by Rick Wakeman, but Emerson has firmly denied this, blaming his voltage-controlled synthesizer for the wrong notes.

These were dark times for ELP. They had to make a masterpiece, as quickly as possible if they were to save themselves from being forgotten. The making of this masterpiece was difficult, due to musical differences, but unfortunately, the dark times did not last.

Sometime in 1972, Palmer had to have a lobotomy, to cure his psychotic delusions which resulted in many a drumset being destroyed. This operation provided the inspiration for their next album, entitled Brain Salad Surgery. The title of the album is influenced by the time when Carl Palmer, being high on Advil, was eating some frozen salad at a Olive Garden, but ate too much and got a brain freeze so bad he had get surgery for some reason. Legend says his Advil addiction side was the one that was tooken out, giving him instant rehab. The cover art is a skull (possibly Kieth's), painted by some guy and the lyrics were written by Pete Sinfield, who was kicked out of King Crimson due to his being a member of the band for too long.[3] This album is universally considered to be ELP's masterpiece because of the song Karn Evil 9, which according to legend lasts half an hour.[4] Apparently the album also had some other songs, but it doesn't really matter, because they were all overshadowed by the enormous masterpiece that is Karn Evil 9. Karn Evil 9 is said to be actually named Carnival Nine - which was actually Greg's idea - but Kieth Emerson said it was stupid, and renamed it Karn Evil 9, because nobody will ever know the song is actually about a futuristic carnival and then war between robots and humans emerge. Greg Lake, furious at the time, then went to Keith Moon's motel room and helped beat the crap out of it.

Selling Out & The Road To Ruin[edit] 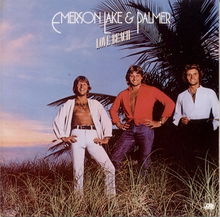 After Brain Salad Surgery, the band went on to make a few more albums, and do a few more tours, but by 1977 tensions within the band were rising, and egos clashing. Emerson wanted to play more synthesizer solos, Palmer wanted to play more drum solos and Lake wanted to write more acoustic ballads. Perhaps, if there were CDs in the seventies, this would have been possible. In 1978 they released an album which was possibly an even greater masterpiece than Tarkus and Brain Salad Surgery combined, entitled "Love Beach", which would seal their fate. The album caused the band to lose the fans it had, but it was so pathetic that it didn't even manage to conquer a mainstream audience.[5] Lake and Palmer later admitted that the album was very forced and that the only reason they recorded it was that a mentally unstable fan with a gun had held them hostage in the studio until they recorded something. After the crisis was solved and the trio was freed, they decided to go their separate ways: Palmer went on holiday, and unexpectedly met and possibly fell in love with Steve Howe and John Wetton, with whom he decided to form a band, this new band became so popular that an entire continent was named after it. People stopped buying ELP's albums after Love Beach, and Keith Emerson was forced to write soundtracks for lame '80s B movies to survive. Nobody knows what happened to Greg Lake. Rumor has it that he accepted a job offer as a yellow jester in the court of the Crimson King, where he will be chained for all eternity.

Despite the conditions in which it was written and recorded, Emerson has since stated that this album, just like every single piece of music to which he had ever contributed anything, was a timeless masterpiece.

To sum up, the band broke up for four reasons: