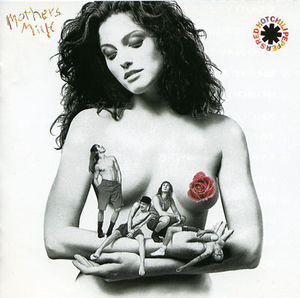 Red Hot Chili Peppers (also sometimes shortened to the "Chili Peppers" or abbreviated as "RHCP") are an American rock band that formed under an L.A. bridge in 1982, or 83... I'm not really sure. It consists of Anthony Kiedis, Michael "Flea" Balzary, Josh Klingkloppokler, and Will Ferrell. They are well known for their fusion of traditional funk, punk rock, GodBerries, and psychedelic rock and everything else unoriginal, which creates a great musical smoothie. This was made famous by the former(Or current? Even I don't know) member John Frusciante. John Frusciante has taken so many drugs in the past that he can't decide if he either wants to stay in the band or do more drugs, for that reason Josh Kombineharvester is now the band's new guitarist.

For those without comedic tastes, the so-called experts at Wikipedia have an article about Red Hot Chili Peppers.

The band had initially consisted of Kiedis, Flea, Hillel Slovak, and Drake Bell, although Slovak died at sea resulting in the band recruiting John Frishushiantey. Soon after, The Red Hot Chili Peppers released Mothers Milk, more commonly known as Lactation. It might be worth mentioning they wrote some stuff before this and got some limited airplay on MTV, but it probably wasn't worth mentioning.

This was a relatively large hit. It was also a period in 1991 when the band became monks, describing themselves as a certain funky type of monk.

This album was written, with the purpose of telling the public what the Chili Peppers were really into: blood of children, bodily glucose levels, violent sex, and black magic. Bear in mind that magik and magic are two completely different things, with magik being magic for people who have severe difficulties with spelling. They released a single called "Under The Bridge", this single was about a bridge, and it made a lot of success from people who liked bridges back then.

For example, John Frusciante left the band. This was during the Great Carrot Famine and he almost broke every bone in his body from falling down the stairs in the pitch black.

Following the departure of previous guitarist John Fruityaunty, the Red Hot Chili Peppers hired a new guitarist to complete their next album, titled I'll Be With You in Just One Minute. The band employed Dave Navarro, who had recently exited rehab (where he overcame his addiction to Jane). This was largely due to the lack of facial hair (after Flea's attempt to grow a beard failed) in the band and Anthony Kiedis thought Navarro's beard would bring a new sound to the band.

Anthony traveled around the world and he noticed that life is beautiful there. But he decided to take a trip around the whole universe and noted that it was parallel. He found out that there's a thing in human called scar tissue and when you die, you go to the other side. Then he got a woman and told her to get on top before he watches Californication. Easily, Anthony found out that porcelain was wasting away. Then it was almost summer time, but that's a stupid song name, so Flea changed it to emit remmus. Then Anthony traveled to countryside and said "I like dirt, I like dirt, I like dirt". He changed his velvet gloves on and saw Jesus, his savior. That left a purple stain in his pillow, but Anthony was right on time for a road trippin'. Then Californication album was ready.

By The Way, or BTW, or Battawah[edit]

Anthony was standing in line to see a show one night and he saw a heavy glow, it was a light on. Then he said, "by the way, what a great name for an album" and said he'd be there and started waiting for. Then Anthony started universally speaking and noticed that this is the place, it was shocking and appalling. He didn't get dosed, but was upon a mountain and felt zephyrs and made a song about them, Zephyr Song. Anthony just couldn't stop and he wouldn't die for you. Then it was already midnight, because everyone knows that anything goes. Flea threw away Anthony's television, while John and Chad watched and laughed, because Flea was such a cabron. That caused a tear in Flea's eye. But they weren't on Mercury, because Anthony's thingy isn't a minor thing. A warm tape started rolling and all the Peppers met the Venice Queen. Then By the Way album was ready.

Upon finding out that every knitting factory under ownership of the band had been destroyed in a similar fashion to Chernobyl, Anthony Kiedis exclaimed: "Shit. This calls for twice as many songs on the next album." And that's the story of Stadium Arcadium in a nutshell. As well as these many other factors:

Flea hit his head and forgot how to slap his bass during this album, resulting in the bass lines being considerably shit.

They toured an ass load following the release of this album, and the only song off it they ever played was Dani the girl Californication. Or... wait... something like that.

Then they had a block party and wouldn't let Chris Rock in. Diddums.

Flea decided that Johnny Frusckiantee was annoying, so he had him killed. Assassin Jeremy Vaughan was the killer. Jeremy now lives peacefully in the United States, even though his best friend Abe moved to India. Anthony was very sad Jon died, saying the he was "extremely heartbroken and was gonna go do more drugs" with his dog "Rufus" to celebrate.

I don't know. Wikipedia it dear. But some people say they went to Mars and Jupiter to see if they were playing stadium arcadium there. They weren't. No one was.

What the Fuck?, or WTF?, or WhatthefuckhashappenedtoRedHotChiliPeppersaaaarrrgh![edit]

Until 2010, Will Ferrell was believed to be the only member of the band who was actually alive, so any information released about I'm In You was done by him. In an interview with Guitar Morons he said "After fondling my drum kit with my testicles, I rather enjoy going down to the studio and recording some What the Fuck?"

According to Peligro, Klinghoffer is being a douche, and playing the piano rather than guitar. "The band has been working strenuously to get Klinghoffer to play the right gosh-darn instrument."

The Jalapeno Peppers released their new "album" on August 30th, 2011. According to Will Ferrell, Flea took up clarinet and was still a beginner so this album sucked bad. Anyway, their first track was released mid-august called Maggie the Rain Dancing Whore, the band filmed the music video on the roof of a building somewhere and had to be very careful so that Josh wouldn't fall off the roof during his solo, everyone watching was very upset when he didn't. Kiedis thought of stage diving towards the end of the video but decided to just spin around a bit. Nobody yet knows why.

In The Year Of Our Lord 2011, at around about the time of Septaugust, Will Ferrell, Pea, Anthony Cleatus and Gash Spacehopper thought it would be a smashing idea to release another collection of Hotel Lounge Music Songs entitled 'I'm In You', which sounds kinda sexy. It isn't. Will Ferrell wanted to call it 'What The Fuck?', but their label said nope because it sounded too similar to an earlier compilation of their best original songs called 'What Tits?'

Will, Pea and Anthony have been secretly married to the same buffalo-rat-dog since its' birth in the late 80's. JK, the latest member, is 'fresh blood' brought in to spice things up in the barn a little, since John Fishauntie quit to make original music and have his hymen re-sewn. (Incidentally, the buffalo-rat-dog escaped the Chili Barn to Jersey, spent a little time by its Shore and was accidentally involved in a local reality show before being spotted by and reclaimed by Pea promising 'smush smush' without the cattleprod reach-arounds. The man is a born liar. Poor Snookie...)

This, their tenteenth album, was received with Cricket Allah Claim, and after everybody had downloaded the zipfile for free, burnt it to CDR and drew their own imaginings of the official jacket cover with a forehead stick, said stuff along the lines of 'Woooooo the Chili's are back - my 20-year-old lower back tattoo of Will Ferrell playing the Jewish Harp is cool for another year! Kally Fawn Eye Ay!' and 'Yaaaay I've been waiting for Disc 3 of Kranium Titanium for like 5 years now! Sheeeet yeeeaaahhhh! There is a God!' When asked of his opinion, God just laughed, gave Jess Klingfilmer a second dong and a lifetimes supply of poppers, and kicked back with a beer to some Jane's Addiction.

In 2014, Flea broke his hand snowboarding. They decided that the recordings he did with a broken hand would be good enough.

In 2016, the Red Hot Chili Peppers released their first album in 25 years to not be produced by Rick Rubin. As a result, it sucked.

In 2019, they brought John back! Every came and rejoiced that god had returned to the greatest band ever.

Back on Earth (because yes, popular belief that God hangs out in 'space' and not, say, Wales, is true), RHCP have threatened to tour every living Human Beings faces until everybody at least 'half-likes' them. They've been stuck in the Ivory Coast since June now. They're all 50. It's a race against time, taste and the population explosion. Let's go.