Big Mama is an omni-present force of badassness that pervades this entire universe and whatnot. Given the state of quantum physics and relativity in our particular universe it appears in the form of a large black woman, most often with a frying pan in hand. Big Mama is solely responsible for the existence and perpetuation of all African-American stereotypes. The original incarnation of Big Mama is understood to have been the man known as Siddartha Gautama, or Buddha, in 583 B.C. You've probably met Big Mama yourself and you don't even know it.You probably got bitch slapped by her too.

Big Mama was born in 1954 in the bathroom of a Denny's. Her parents were the only 2 full blooded African-American Irish cavemen in the entire state of Ohio. Upon birth Big Mama was thrown into the wilderness as a sort of test, you could say. A family of Hippopotami found her and raised her as one of their own. She spent the first 6 years of her life with these hippos. It was because of this that she developed an iron will and self confidence that propelled her into the straosphere of ass-kickery where she has resided ever since. 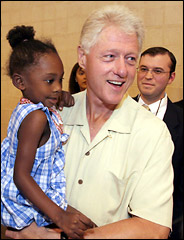 Even during her childhood, the white man was already trying to capture Big Mama to use as a military weapon.

After escaping from the grip of the notriously close-minded Mormon hippos, Big Mama decided to head straight to New York City at the age of 7. Since people self-destructed upon sight of her, Big Mama had to live in the sewers for the first couple of years. She had to learn to control and focus her powers for the good of the Big Mama.

Big Mama single-handedly put the "soul" back in religion. After deciding the Africa was fucked up, Big Mama fixed it. She did this by traveling with her church congregation to build mud huts in Ethiopia. While she was there she met world famous soul singer Edwinn Star and made babies with him on the spot. These babies went on to become world leaders, but we don't have the time or resources to go into much detail on that.

One could say here that Big Mama mastered every Eastern fighting style, but she didn't. She didn't give a shit. "Kicking Ass" was her only fighting style. She could teach you, but she'd have to charge.

Roundhouse Bitchslap - Consists of the wind-up, the scream, and the following complete destruction of the opponent.


Frying Pan Rectal Invasion - This one is pretty self-explanatory; I'll just let you marinate on it.


The Beatdown - One of the most complicated martial arts moves in existence, this technique is what dealt fatal blows to both Jaco Pastorius and Bruce Lee. It consists of lifting a bar stool over your head, snapping it in two, and impaling the opponent in the chest while dancing to an Irish Jig in 7/8 and performing a the entire musical score from Hell Up in Harlem on the flugle horn.


Eat My Funk - Starts with a wall-flip and ends with Big Mama's foot shoved 5 feet into the opponents stomach. Insant kill move.


Stunner - Made famous by Stone Cold Steve Austin, the WWF(E) wrestler. However, Big Mama has been performing this move since the stone age. Big Mama even used this on Nixon during the Watergate scandal.

After her 18-year world-wide soul music explosion tour with her husband Big Papa(otherwise known as Edwin Starr), Big Mama decided to settle down and buy a farm in Crawford, Louisiana. What proceeded from there is documented in a novel by Watusi Jenkins entitled "Big Mama: A True Story of African American Pride" 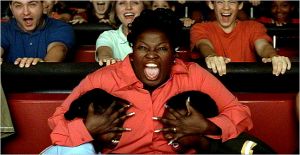 Shirley Q. Liquor, one of the current manifestations of Big Mama, alive and kickin'

KNOWN INCARNATIONS OF THE BIG MAMA

With an eerie regularity the phrase "Tell yer mom an dem I said hey!" is uttered by every Big Mama. No one is quite sure why. It is quite possible this is merely the manifestation of the true sound of the creation of the universe inside of the English language. Om. That's it. Oh my lawd.

Many people have found the Big Mama amusing. However, this is offensive to the Big Mama and all real beings in the universe. Big Mommas House 1&2 are two of the worst pieces of art ever conceived by human beings. Anyone who saw or thought about seeing these movies is going to burn in the hell that Big Mama runs out of the back of her favorite rib shack. Don't even think you can get away from her. Martin Lawrence was a Big Mama. This may confuse you. However, the movie was a test to separate people who truly understood Big Mama from the senseless masses who will never understand. OBESE BLACK WOMEN ARE TAKING OVER THE WORLD'S GOVERNMENTS AND THERE IS NOTHING YOU CAN DO ABOUT IT. 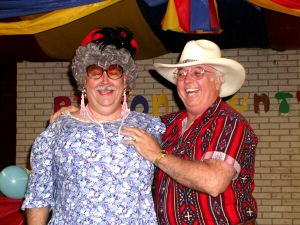 These white guys thought it would be funny to make fun of Big Mama, she ate them 5 seconds after this picture was taken.
Retrieved from "http://en.uncyclopedia.co/w/index.php?title=Big_Mama&oldid=5934901"
Categories: