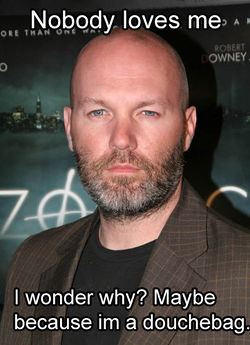 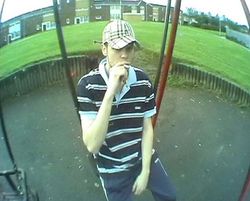 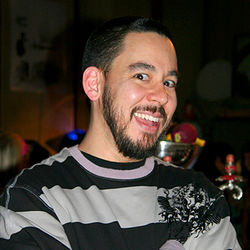 Nü Metal (aka "Rock music for black people" or "Rap music for white people") is the bastard child of Pantera and Mr. Bungle. It is also the murderer of boy bands. It was created in the late 90's and has gone to holidays ever since.

Not too long after Nu Metal's formation, it hit the charts like an Emo runs to the darkest corner when the sun comes up. And after KoRn's successful induction into the mainstream, similar acts such as Drowning Pool, Crazy Town, P.O.D., Papa Roach, Slipknot, Disturbed, and My Parents HATE ME would follow, to make a trend that would last about a decade. It is unique in sound but its reputation was tarnished when stupid ass preps started liking it cuz' MTV was finally paying attention to the angry, rejected kids instead of rich kids. The creators of this genre were: a whinny vocalist, a guitarist that couldn't play anything else then power chords and played guitar for 3 months only, a bassist just for teh lulz and a drummer that was used to use trash cans as a drum kit. (Lars Ulrich showed his roots of nu-metal later on)

The golden days of Nu Metal also started to come when Metallica turned Emo and began playing simple riffs. Bands then had the great idea to keep things simple and eliminate solos, because they couldn't play them anyway. Instead, they let the guitarist go batshit insane all over the guitar, producing the most impressive riffs. At this point, these bands knew that they needed to be cool and act cool, because in the 90's if you weren't cool, you were a fool. So they all decided to go gangsta, using rastas, bling bling and boxers showing up. Nu Metal was on a roll, and finally stood out when KoRn and Deftones arrived to the scene.

Having an "edgy look" and radical attitude, these bands quickly made an impact within teenagers whose parents wouldn't buy stuff. Using adidas sneakers and hoodies, both bands managed to reach mainstream success, that later more bands would copy and earn millions. Limp Bizkit was a perfect example of this, when some douchebag decided to whine about haters, how he never got good grades and how he was bullied at school. This attitude was in all of their albums, being Chocolate Starfish and the Lyrics Clusterfuck Water the most notable one. They also liked to solve traffic jams problems with their song Rollin.

Another band to jump into the Nu Metal ship was Linkin Park. Believe it or not, this band was actually decent since all songs were about pain, but this wasn't a problem to the fan base since they liked to cut themselves in every concert. With a whiny vocalist, a wigger, a guitarist that couldn't play more them 2 power chords and a American DJ, the band had everything to be successful.

The genre reached its peak in 2000. All bands in the world were now Nu Metal.

Basically, every Nu Metal band is three members of Korn and one other member of a rap band, but if you need a more detailed breakdown:

Nu Metal songs CAN'T have solos or any complicated riffs. They should only be made of power chords. These are the basic steps to follow when creating a nu metal song:

1) Intro with guitars fading in

2) Heavy guitar chorus (with no lyrics or vocals)

4) Heavy guitar chorus (with lyrics/vocals, can also be some mumbling shit)

Nu-Metal died somewhere in 2006. With MTV focusing in Emo shitty bands, all Nu-Metal bands decided to switch their sound to a more pop rock style to keep earning cash. Most of these bands would then deny being Nu-Metal at all costs. Also they started to dress normally. Limp Bizkit's album Results May Suck, This Cd is Shit was one example of this, and later Linkin Park's Minutes to Shitstorm and A Thousand Sucks did the exact same thing.

Lately theres been discussions about Nu Metal coming back. The reality is: its truly dead, there arent any more bands with this genre out there. Still, Deftones latest CD Raymond Eyes and KoRn's Korn 9000: Remember who we were? did managed to capture a bit of the old nu metal essence, but only for a brief moment (about 0.002 seconds). Limp Bizkit's upcoming album Gold Turd will try to bring it back, but the question is: will it sell at least 10 copies?

The only way to revive Nu Metal is to bring the early 2000s back using a time machine.

Nu Metalheads are often seen roaming the malls in their Chained Tripp pants and oversized band tees. They also wear baseball caps and their pants are below their knees. Some of them use shorts and long tube socks (preferably white). Their hair is usually spiked or dreadlocks (unwashed) and the presence of a goatee is a must. If you spot one of these fans, act cool and nothing will happen to you, because you might mistake them for thugs. Metalheads (the real Metal fans duh) hate Nu Metalheads and vice-versa. There are always confronts between both sides. If you walk into you a park, you may see the skateboard area full of Nu Metalheads riding their skates with their arses showing. Metalheads will simply keep a distance, unless its a mosh pit.

To "true" metalheads, Nu Metalheads' music is known as false metal, gay metal, or the classic MTV metal. Real metal is refereed to by Nu Metalheads as "old man's beard boring metal". Still, is true that both sides listen to artists from "both metals" secretly, but they still attack and despise those musicians. Nu Metalheads usually get all the girls, because they are a mix of rockers and thugs, and girls like thugs, or at least being treated like shit. Also, with some former Nu Metal bands being now girl bands, its even easier to score.

Nu Metalheads also hate all their friends and parents. Same goes to school and college.