For those without comedic tastes, the so-called experts at Wikipedia have an article about Insane Clown Posse.

Insane Clown Posse (ICP for short) is a top secret CIA scientific investigative paramilitary task force dedicated to uncovering the mysteries of the universe. Using their powers of magic, music, and makeup, ICP have contributed to a vast amount of knowledge within the scientific community. Their most recent discovery, "The Functionality And Magical Properties of Fucking Magnets", earned them a 3010 Nobel Prize in Science, Magic & Oddly Placed Profanity (better known as the coveted SMOPP). ICP is best known for their weekly series on PBS, "Fucking Rainbows And Shit" featuring famous astrophysicist Neil deGrasse Tyson. 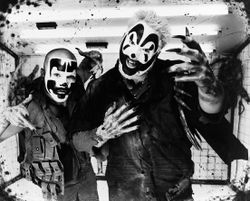 ICP during an average day.

ICP is comprised of two members, Violent J and Shaggy 2 Dope. The duo first met while attending Brigham Young University and performed together as members of the Mormon Tabernacle Choir beforing leaving the Church of Latter-Day Saints out of fears the church was becoming "too worldlee (sic)." 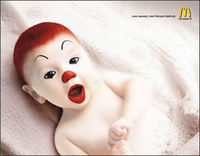 A clown is born. Insanity would come later.

Contrary to popular belief, the Hon. Mr. Justice Violent (usually abbreviated Violent J), the son of a two headed freak-show (father) and a mystic fortune teller from the distant realm we call Shangri-la, was born, in an alternate universe ruled by cell phone-eating pelicans, in 1775 to a fairly loving, pacifist orphanage, abandoned by his parents for his bizarre clownlike appearance. At the age of 2, Violent J's intuitive scientific instinct allowed him to unlock the hidden power of miracles inside him, and thus Violent J unleashed a torrent of "magic everywhere in this bitch" killing all other occupants of the orphanage and earning him his nickname. Now without a home, Violent J was taken in by Snooki Polizzi who drunkenly mistook him for a penis. Under the training of the monster, Violent J had a brief stint as a supervillain before being rescued by Child Protective Services.

After graduating from junior high at the age of 37, Mr. J decided to turn his life around, after making one John Wayne Gacy take the fall for his crimes, and use his power for the greater good. After singlehandedly educating Freud and Einstein in their respective crafts, J decided that his talents were best used saving the people of the 21st century from the dangers of their own so-called "science". Violent J then summoned his magic to run around the world at a speed beyond light, at which relativity could bla bla bla landing him in the year 2006.

Shaggy is a clone resulting from multi-continuity bla bla bla from Violent J's travels to the future, thus his origins are one in the same and irrelevant. A much thinner version of Violent J, Shaggy's primary purpose is to "get the faygo and squres" as they put it.

J and Shaggy each have children with similar clownlike appearances. This is another miracle the duo is still trying to decipher.

ICP have unlocked many of the miraculous mysteries that define our universe today. Their breakthroughs have included everything from the revelation that stars were concentrated balls of God's anger and gas, to the false tears of Glenn Beck being revealed as a primary cause of global warming. ICP's experiment of microwaving a potato for a full year greatly strengthened the United States' nuclear arsenal, and that same potato was indeed dropped on Hiroshima. Still today the Japanese thank ICP for this buttery, salty gift, and apologize for their mishandling of it which resulted in the deaths of hundreds of thousands of their people.

ICP also commissioned the Large Hadron Collider, in the hopes that the experiments conducted here would create a black hole large enough to absorb all copies of Stephenie Meyer novels past, present and future; thus far similar black holes have collapsed due to Hawking radiation. Like many green initiatives post-2008, the machine is powered by hope and change.

Would you trust these creepy bastards?

Magnets: They go both ways.

Contrary to popular belief, ICP are not in fact scientists; rather they are a group dedicated to the observation and recognition of miracles. ICP simply submits their work to the scientific community in the hopes that these lab-coated motherfuckers will admit that our world is powered by magic and profanity and cease their lies. Recent reports show that ICP may be growing pissed however, as scientists continue to falsify such "breakthroughs" as the supposed existence of radio waves ("It's just there in the air") and the internet. Thus drastic measures may be taken in the future to prevent the spread of science.

Let's be honest, do any of us really know how magnets work? I've taken three college Physics courses and I don't. To this day ICP asks the same question, and though they still have yet to provide an all-encompassing answer, their current model of Insane Clown Posse Physics (ICPP) which asserts that magnets along with many other elements are simply hermaphrodite rocks with different parts that are attracted to certain parts of other hermaphrodite rocks, seems to fit the bill.

ICP have worked hard throughout their lives to undo the scientific indoctrination of our children, fulfilling the dreams of visionaries such as Sarah Palin and steadily bringing America back to the golden ages of the 1490s. Their most recent smash hit, Miracles, made the Billboard Top Ten singles list of 2013, 2014 and 2015 and to this day is sung as a national anthem in most Southern territories. It teaches children of the magic of their world, and perhaps the most important life lesson of all: to constantly ask questions one doesn't want to know the answer to. The song also tells the heartbreaking story of Violent J's cellphone, nearly eaten by a pelican. ICP received six Grammys for their work, all of which have been melted down and implanted in their teeth.