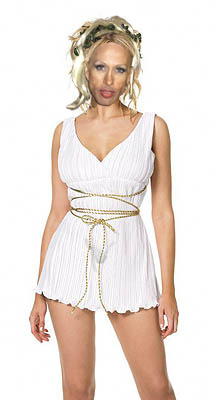 One of the only known photos of Hermaphrodite. Usually the camera just explodes.

Hermaphrodite (Prounounced Herm-aff-row-die-tee) is the Greek God/Goddess of love, beauty and transsexuality. He She It They were an idol of great worship in Ancient Greece, and many temples were built in their honor. Hermaphrodite is best known for their extreme ugliness and grossness, as they possesses both male and female "qualities," which would be hot if they didn't possess the repulsive qualities of each gender (like a hairy Choda and monthly yeast infections). Eventually, Hermaphrodite was tired of the other Gods razzing them all the time, fled Mount Olympus, and started their own religion, Hermaphroditology. Hermaphrodite is still widely worshipped as a deity today by a small and still declining European pagan population, and a small but increasing transgender population. 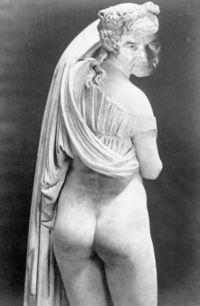 An ancient artifact depicting the god(ess).

The first references to Hermaphrodite appeared around 600 B.C. The god(ess) was frequently depicted in artwork and cave drawings in Ancient Greek culture though it was hard to draw both genitalia when hand painting on a wall. The Greek people would pray to Hermaphrodite if they needed help in their love life, or if they desired a sex change. In Greek society, Hermaphrodite was respected as a powerful divinity, and they often made ritualistic sacrifices to appease it them such as slaughtering a prisoner of war bought at the market on discount during the post-Christmas sales. There was even a holiday in their honor where the greeks would change gender roles for the day. Men would bring up decades old arguments and ask their wives "what's wrong" all day and the wives would fart and hold their husbands head's under the blanket. Hermaphrodite was known to be easily angered if not pleased by the people, and many historians believe that Hermaphrodite may have destroyed the Ancient Greek society in one of their frequent violent rages (later known as PMS).

Greek mythology originally referred to Hermaphrodite as "King Of The Gods." They later decided that this didn't fit, so they called them "Queen Of The Gods." This was also later changed, and after several other names were suggested to no avail, the Greeks quickly tired of the pronoun shuffling and just made Zeus the King. Hermaphrodite was then demoted to the lower tier Gods and wasn't allowed to sit in the VIP box during the Olympic games. This made Hermaphrodite very angry, and they exacted revenge by cloning themself several thousand times by inserting their penis into their vagina in multiple possible pleasurable though likely agonising conceptions.

The Hermaphrodite clones proved to be be trouble makers causing plague and famine throughout the land. After countless citizens had perished, Zeus finally stopped the madness. Zeus disposed of the clones and then in a drunken joke made being made Hermaphrodite the god(ess) of love, beauty and transsexuality. Big mistake. Hermaphrodite used their new powers to suck the beauty out of every Greek human all for themself. This made the formally studly and sexy Greeks so hideous that they would not reproduce anymore. As a result, the entire Greek society died out.

The other Gods found this funny at first but then were angry they could no longer take out their petty squabbles out on one another via their puny human creations. Epic poets had to find new work. 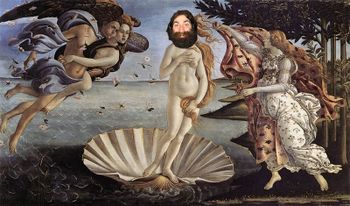 The infamous birth. They would get even uglier.

Legend has it that Hermaphrodite was born when a drunken Aphrodite made love to a retarded fish-frog. In a strange medical miracle, the retarded fish-frog became pregnant. Aphrodite hoped the retarded fish-frog would give birth to some gorgeous mermaid but instead got something much different. Six months later, Hermaphrodite was delivered prematurely by C-Section at the Mount Olympus Private Hospital (only for Gods with divine platinum level insurance). After seeing her new child, Aphrodite immediately gave up the will to live and dove straight into the rive Stix (as did all other witnesses to the birth). Hera heard of the news, and rushed to the hospital to save the child. Hera was somehow unphased by Hermaphrodite's hideousness, and took them to live with her, hoping they would outgrow their uglyness. Hera was known for her stupidity.

Soon enough, Hermaphrodite was an awkward teenager, and had not outgrown their ugliness but due to out of control estrogen and testosterone spikes it became more hideous than Medusa. These conflicting hormones made Hermaphrodite grow giant testicles that produced eggs and a male chest that would lactate. During this stage of their life, Hermaphrodite unintentionally killed Zeus, simply by looking at him. Hermaphrodite was punished by being thrown into the lava pits of Mount Olympus where they spent a century as punishment. Needless to say, this didn't help to improve their appearance. 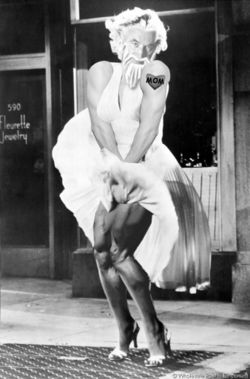 Hermaphrodite tried to carry on with puss filled leathery burnt skin but the God's were relentless in their teasing. After trying multiple forms of emo-suicide but divinely coming back to life again they sighted and decided to hit the road. They packed up their knapsack, and headed West in a Conestoga, looking for something better.

Three weeks later, Hermaphrodite arrived in San Francisco, a city that would become their new home. They fit in perfectly among all the other perverted LGTBQ+ people there and was accepted with open arms. Hermaphrodite started working two jobs, one as a fabulous drag queen dancer and the other as a Mexican masked wrestler. They soon became a very influential and popular figure in the Bay Area, and groupies started following them.

Hermaphrodite fell deeply in love with one of these groupies, an asexual retarded fish-frog named Jenny. The couple got married, and eventually had one child, who they named Justin Bieber. Things were great in Hermaphrodite's life for a while until Jenny filed for a divorce. Jenny came away with every cent the couple had earned and Hermaphrodite was stuck with custody of Justin Bieber.

After doing a series of public speeches advocating for equal rights, Hermaphrodite was elected Mayor of San Francisco. They was a popular leader and slowly gained a cult following. Hermaphrodite used this power to lay the foundation for their religion, Hermaphroditology.

The complete teachings of Hermaphrodite were written into the Trans-Bible which included the 11.5 Commandments Of Hermaphrodite and numerous pornographic images. Hermaphrodite sold these books throughout California for free as long as they signed up for a year long NetFlix account (a sound investment partner). The religion became quite popular in San Francisco, and soon caught on like a storm throughout the globe. By the Dark Ages, Hermaphroditology was the largest religion in the industrialised world. Today, Hermaphroditology is widely practised, especially in the sexually tolerant Middle East.

Hermaphrodite's best known power is Its ability to perform sex changes faster than the best L.A. plastic surgeons with half the recovery time. They also has the ability to take the form of any male or female of any species and even change skin colour leading to the decades long confusion known as Michael Jackson. Hermaphrodite also uses their power for good sometimes. It once rescued millions of LGTBQ+ souls from the loving God's underground torture chamber (Christian hell). After a negotiation God allowed them to leave but sent them all back years later in revenge for the US supreme court legalising gay marriage. The two weren't on speaking terms for a while until God in a night of drunken thoughtlessness got freaky with Hermaphrodite. He promised he'd call Hermaphrodite one day and pay for an abortion if necessary finding that one divine child inspiring 2000 years of holy wars was one too many. 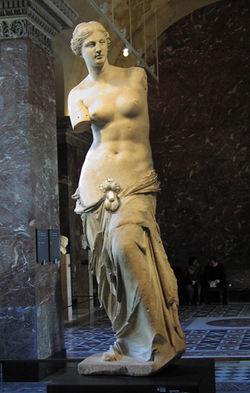 The famed "Penus De Milo" statue of Hermaphrodite, in The Temple Of Sheemayle.

Hermaphrodite has been widely worshipped for many years, starting around 650 B.C., and continuing into the modern era. Perhaps the most famous temple dedicated to them is The Temple Of Sheemayle which contains the famous art masterpiece the "Penus De Milo", a sculpture which squirts water out of both their penis and labia. It is said that if you kiss the statues lactating male chest Hermaphrodite will grant you a Silicon breast implant.

For the uncouth among us who choose lies, the so-called experts at Wikipedia have an article about Hermaphrodite.

Featured Article  (read another featured article)
Featured version: 25 January 2021
This article has been featured on the front page. — You can nominate your favourite articles at Uncyclopedia:VFH.

Quasi-Featured Article (3 October 2006)
This article was nominated to become a featured article; however, due to several votes being devoured by a Kodama, it didn't make the cut (15/17.5). Don't let this happen again! For just pennies a day, you can prevent another travesty of this nature, or vote for other articles at Uncyclopedia:VFH.
Retrieved from "http://en.uncyclopedia.co/w/index.php?title=Hermaphrodite&oldid=6068512"
Categories: