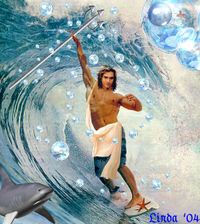 Poseidon, the Sea-Man!
“Wine dark sea, my arse. I had sea-sickness from Lesbos to Circe's Isle”

Poseidon (born Eugene Poseidon Theodore Fiskmore III, October 8, 843 B.C. in the Marianas Trench) is the god of the sea, as well as horses, earthquakes, sporks, bubbles, and he is also King of Atlantis. He figured as Rodon in Illyrian mythology, Nethuns in Etruscan mythology, Neptune in Roman mythology, Aquaman in Comic mythology, and King Triton in The Little Mermaid.

Poseidon was hatched from a fish egg in 843 B.C. and was adopted by the Zeus family when he was four. It is suspected that his biological parents were eaten by larger fish, but this is unconfirmed. The Zeus family later noted that they found Poseidon when they were going through the center of the Earth with the stupid frog creature, Uncle Jar Jar. On his fifth birthday, he was presented with a trident that could produce electric volts. Why this was given to a five year old, no one knows, but the Zeus family cat disappeared a day later and was never found. When Poseidon was twelve, he discovered his telepathic power over all sea creatures on a school field trip to Sea World. That day, he single-handedly caused the volcanic eruption that caused tsunamis in the Aegean Sea, destroyed Minoan fleet, leaving Crete open to mainland invaders.

In junior high, Poseidon joined the baseball team and was expelled his first game for using a sea urchin instead of a baseball. After that, Poseidon kept to himself for the rest of middle school. During High School, Poseidon joined the swim team, where he broke every record previously held. The swim team won eight competitions and Poseidon was to be recruited to be in the 825 B.C. Olympics. Poseidon, however, decided to continue his studies instead of competing in the Olympics.

After Graduating from University of Atlantis in 818 B.C., Poseidon decided to take an active role in Atlantaen society. In the spring of 817 B.C., Poseidon ran for Emperor of Atlantis - a brave move that ended in a landslide victory for Poseidon. In the summer of 816 B.C., Poseidon was sworn in to Emperoricy. His first act as Emperor was to kill all the lawyers, and then to ban Long John Silvers permanently.

In 806 B.C. the Peloponnesian War started between Athens and Sparta over who got the last piece of chicken at the family reunion. As the war was starting, Athens called for support from Atlantis and Poseidon. Poseidon - being a nice guy - decided to help the Athenian fleet destroy Sparta.

As both sides began mobilizing fleets, Poseidon and his elite fighting squad, called the PUFFS (Poseidon’s Underwater Fighting Forces Squad), had staged an underwater assault on the Spartan forces. The Spartans however had realized that the Athenians would have Poseidon attack their fleets, so they were prepared. The Spartans had abandoned their battle fleets and took a small armada to Atlantis where they took hostages, including Amphitrite. When Poseidon and the PUFFS arrived to see that there were no Spartans, Poseidon immediately realized their plot and sped back to Atlantis. The Spartan forces were not willing to cooperate with Poseidon, unless he would agree to destroy the opposing Athenian army. Unwillingly, Poseidon destroyed the Athens, resulting in a victory for Sparta. However, once Poseidon destroyed the Athens, the Spartans blew up Atlantis and it sunk to the ocean floor. 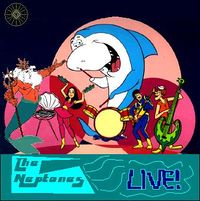 After the sinking of Atlantis, Poseidon became very depressed. He took to alcohol as a means of forgetting the disaster, and was arrested numerous times on public drunkenness charges. On one drunken stroll, Poseidon stumbled into a bar. It turns out that the bar had hired a live band to perform that night, but they never showed up. The large group of bar-goers was getting upset. Fortunately a small, unnamed garage band that was chosen as second pick in band auditions volunteered to perform in the other bands’ stead. The only problem was that the bands’ pianist couldn’t be there. Poseidon, in a drunken muddle, volunteered to take the absentee’s place, and the show was on.

The bar-goers liked the band so much that the bar hired the band to perform nightly for the next month. The band decided to keep Poseidon as the pianist and name their band “The Neptones.” A record producer happened in to the bar where “The Neptones” were practicing for that night’s show, and was so impressed, that he gave them a record deal. The Neptones released a record entitled “The Neptones LIVE!” that went Gold in the first week. With songs like “Hammerhead Hop”, “Clams Don’t Care”, and “Forgotten Shells”, “Neptones Live” inspired a worldwide frenzy for anything and everything Neptone.

The Neptones’ next album, “Mellow Submarine”, included songs like “Nowhere Merman”, “Seaweed Fields Forever”, “All you Need is Air”, and “I Want to Hold Your Flipper”, grew an even larger fondness for the band. Across the seas, people were talking about the Neptones. The Neptomania had begun. Over the next twenty-three years, The Neptones had amassed a total of nineteen Platinum and seven Gold records. The now multimillionaire Poseidon said in an interview, “I've got to admit it's getting better, it's getting better all the time.”

The Neptones split as Neptone guitarist, Bob Franklish, decided to quit and put out a solo album entitled “Atlantis Rock”, which bombed. Poseidon went back to the sunken city of Atlantis to find the citizens of New Atlantis outraged that their leader had left. Poseidon decided to create a new campaign to win back some support.

He summoned the best fish lawyers he could find using his fish-telepathy and claimed his right to be King of the Sea. He claimed that since he was Emperor of Atlantis, and Atlantis was now part of the ocean, that his power continued to the borders of the ocean, as well. Nobody could defeat his lawyers in court, and it was decided that Poseidon was the King of the Sea. This won him support from the Atlantaens, and he was voted winner the “Best Emperor Ever” award for three hundred and ninety-four consecutive years. 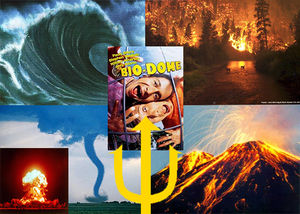 His fury unleashed disasters upon the world, threatening to kill all life. Volcanoes, hurricanes, tornadoes, tidal waves, exploding sheep, and Bio-Dome with Pauly Shore was killing all life on the planet. 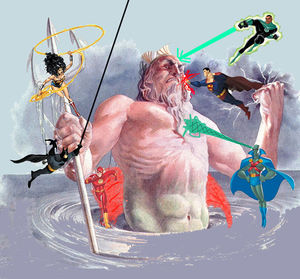 Eventually the disasters lessened as Poseidon began to tire. The NSA (National Seapeople Association) and the FBI (Fish Bureau of Intoxication) quickly subdued Poseidon with the help of The Justice League. After exploiting Poseidon with the help of a prestigious super team such as The Justice League, Poseidon cleared up any technical issues such as, hurtfful insults, use of Guns during combat, various "low blows", copyright conflicts ect. in court acting as HIS OWN attorney. He was VERY convincing and earned a new respect within the Divine Court of Salmon.

“I felt that I had been vicitmized and utterly disrespected. I AM a God and I AM all powerful, but I really felt alone and hopeless when THE JUSTICE LEAGUE came in full force to subdue me...”

In court, Poseidon was sentenced to four consecutive life sentences, but got a lighter sentence on a technicality; he is immortal. Instead, he was sentenced to ten years in prison. In jail, Poseidon met Morgan Freeman and Martha Stewart, both of whom he knitted sweaters for out of the seaweed that grew in-between his toes. After only a week in jail, Poseidon was released on good behavior, really, really good behavior. He saved a bunch of baby kittens from a fire and taught them to love again, and performed the Hindenburg maneuver on some choking guy, and taught him to love again too, but not in a scary prison-sex way. He improved the air quality, remodeled the living quarters, helped disabled children, and doubled the prison's tax rebate. Yeah, the point is that he got out.

As god of the sea, horses, earthquakes, sporks, and bubbles, Poseidon spends a lot of time answering prayers directed towards those objects. During the course of this time, Poseidon has received quite a few interesting prayers. He decided to document them into a series of books, that soon became best sellers.

Recently, Poseidon has retired from his Emperor title, but has been named 'Honorary King of Atlantis' by the people of Atlantis. His son Aquaman now rules the Kingdom of Atlantis with a watery fist.

He has retired to somewhere in Mongolia, where he is actively seeking lost or stolen items like The Holy Grail, Amelia Earhart's plane, Munch's The Scream (which, by the way, he recently found), the Davidoff-Morini Stradivarius, William Shatner's talent, and his keys. He enjoys fishing, golfing, donuts, and long walks on the beach.