From Uncyclopedia, the content-free encyclopedia
(Redirected from The Aeneid)
Jump to navigation Jump to search

Virgil spent ten good years of his life working on the Aeneid. Here he is shown after a fight with a rabid fan of Greco-Roman wrestling which cost him his right nostril.
“Popcorn is available at the interval.”

“I am sorry to disappoint. I am not a virgin.!”

“Where are the puppets?”

For those without comedic tastes, the so-called experts at Wikipedia have an article about The Aeneid.

Virgil originally wanted to write Escape from Tracy Island but was prevailed upon by Augustus to compose a 'doorstep buster' of a poem to give the bird to Homer in particular and the Greeks in general. There was also the small matter that Augustus's family claimed descent from Aeneas, a Trojan prince and the son of the goddess Aphrodite. Aeneas features a bit in The Iliad, largely getting his arse kicked around the battlefield by Diomedes before his mother and Apollo rescue him from death. The Greeks said Aeneas escaped when the city fell and that he had 'Gone West', without being anymore specific. This left Virgil an epic opening: What indeed was Aeneas's post Troy career and how to link that to his powerful patron?

A first draft was prepared and run past Augustus to check for any literals, typos and lack of grovel to a descendant of Aphrodite (or Venus to give her Roman name). The emperor expressed delight at Virgil's preliminary work and ordered an unlimited supply of free scrolls for Virgil and his team to get on with it. In Augustus's mind, The Aeneid would enshrine Rome's conquest of the languid Greek speaking east and provide excellent cultural 'taunt material' at exclusive dinner parties. In return Augustus asked Virgil to make Aeneas a handsome hero and the Carthaginian queen Dido a slimy seducer, in the fashion of a recently dead acquaintance of his.

The Beginning of the Story[edit]

Aeneas had time to play piggyback in Troy.

Chronologically, The Aeneid starts with the destruction of the city of Troy. Aeneas is at home, having torn up his invitation to King Priam's victory banquet over the Greeks in some dispute about dress code. Aeneas's Trojan Fetish suit is judged 'inappropriate for the occasion'.

When the Greeks burst out of the belly of the Wooden Horse, Aeneas escapes but leaves behind his tiresome wife which was, either careless or finding an excuse to get divorced. In the thickening smoke, Aeneas thinks he has strapped on his backpack with all his gold and silver possessions stuffed inside. But when he emerges, Aeneas discovers he had carried his old father Anchises by mistake. Aeneas is in despair, he considers killing himself but is dissuaded by his son Ascanius and some other old Trojan friends who have also got way from the city.

Since there are Greeks everywhere and Troy has gone, Aeneas suggests to his colleagues that they leave the area and head to the West for political and cultural asylum. Anchises claims his old girlfriend (and Aeneas's mother) Aphrodite has some good contacts they can use, so the Trojans smuggle themselves on board a cargo ship apparently bound for Rome.

An Example of Virgil's Poetry[edit]

Now to the stuff that will help you understand why this poem is supposed to be a big deal. Virgil changed from verse to rhyming couplets, or as experts say, from Classical Latin into Lame Latin:- 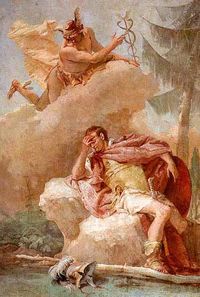 Get on with it Aeneas! 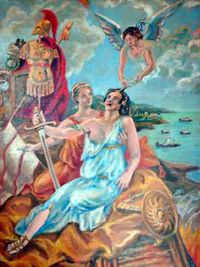 Men are such schmucks.

On the West Coast of Turkey, Aeneas was born and raised,
In a big private palace, where he spent his fun days.
Chillin' and Maxin', Bonin' slaves when urge took strong hooks,
Aeneas raced boats to improve his beach boy good looks.

Then an army of Greeks, who were up to no good,
Left a big Wooden Horse, in his fair Trojan neigbourhood,
When everyone was asleep, knocked senseless with strong wine,
The Greeks burst out and killed the Trojans like swine. 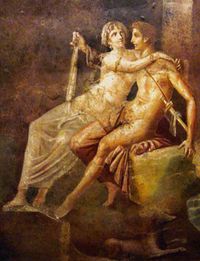 'I am going to stick to you like glue Aeneas.' Queen Dido lays down her law. 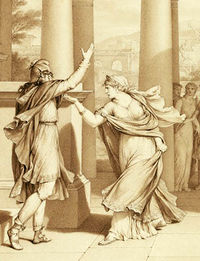 Aeneas tried to flee, by the main city gate,
Greeks were there waiting, he was obviously too late,
Then Aphrodite came down, stirred up a thick choking mist,
The Greeks could see nothing but perhaps they were just pissed.

Outside the burning walls, Aeneas felt tear jerking pity,
To cheer himself, he would found a brand new city,
It would be like Troy but a lot more jaw dropping,
With nightclubs, sushi bars and 24/7 shopping.

Aeneas waved for a boat off the coast of Turkey,
Every one in it smelt like rotten fish from the sea.
The oceans were rough, and so were the sailors,
Would Aeneas survive, with his bunch of sad failures?

The ship dropped anchor about the darkest ninth hour,
Aeneas yelled to the captain: 'Yo Homer! take a cold shower!!'
Brushing his long hair, and cleaning his dentures
Aeneas was ready to start these thrilling new ventures

Except of course, Aeneas and his friends were in Carthage and not Italy as planned. Lesson learned: Don't take direction from strangers.

Aeneas with his lucky pig.

Classical scholars say this is where Virgil indicated on the text where he would break off from reciting the Aeneid and take time out from his reading. Liquid refreshments would then be served and depending on the venue, a lot more besides for those with extra coins stuffed inside their togas.

There was also a tradition for a stand-up poet to quip in with some topical jokes as epic fans settled back on their couches, picked up some grapes and licked wine juice off a clean slave (of either sex). Once the audience had thoroughly cleared their throats and lower intestines, the epic would then continue. So now the story resumes in Carthage, not Rome as planned by Aeneas.

The Carthaginians hated the Greeks and so the Trojans were looked upon to be useful allies to resupply and send back to Greece to cause havoc. However, Aeneas said he wasn't looking for a return ticket but as the Carthaginians were about to throw the Trojan refugees into the sea, Aeneas was reprieved by Queen Dido. She was looking for a lover-husband and admired the rather girly looks of Aeneas (inherited from his mother). He was invited to live with her in the royal palace but Dido insisted Aeneas's father live in the stables as she could not abide ugly old men wandering around her private areas.

This romance between Aeneas and Dido goes on for a year and once again the epic appears to be over. But Virgil understands he needs to get Aeneas to Rome somehow. The Gods will have to intervene but this time, not with the Greek names but their fancy new Roman ones adopted recently. So Aphrodite as Venus appears to Aeneas to tell him that he has got to get to Italy to father an illustrious dynasty of which Augustus is the latest descendant. Or Jupiter will fry off his bollocks.

Time For Some More Poetry[edit] 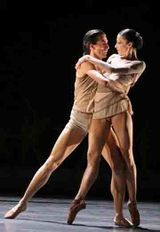 They liked dancing together in their underwear. 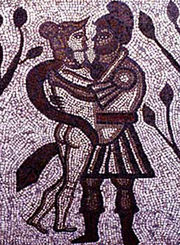 'Is it me or has it turned chilly Aeneas?' 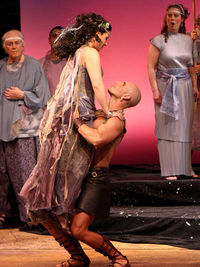 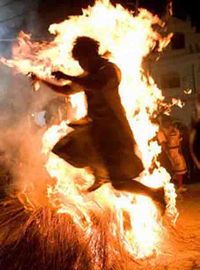 Venus came upon, the sleeping nude hero,
Entangled within, the charms of Queen Dido,
She whispered, 'Quick, leave before this old dog awakes',
'For Jupiter plans to send down, a mighty earthquake.'

First rays of dawn, Aeneas slipped off the love couch,
If his life was in danger, he'll be no fat slouch,
Rousing his friends and hosing down his old Pa ,
Brave Aeneas said:'Rome is where we go, It's not too far'.

Queen Dido screamed, as Aeneas high tailed it away,
She determined not to see out, that god awful day,
A pyre was ordered and set underneath her front door,
Their sex toys lay smashed, on the green marble floor.

Now Dido of Carthage, prepared her final death act,
The orchestra struck up, as a matter of fact,
'I Curse you Aeneas and all of your kin',
'I die as I lived, too hot for my skin'.

From distance, Aeneas saw the roaring high flames,
He said to his son, 'what's with these strange dames?'
Dido jumped out, shouting 'I'm done with all men!',
The Trojans judged her dive, a five out of ten.

And so on to Sicily, Aeneas made it ashore,
There Anchises said, 'Can't go on no more',
'This body has gone, my mind will soon follow',
'Grieve for my death, cash my pension tomorrow'. 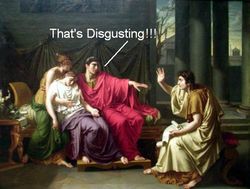 Aeneas was promptly denied the money he needed to start a hot dog store when the venture capital company heard his ingredients. 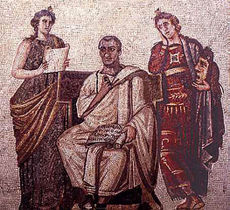 Some of the audience found it hard to concentrate, or stay awake with Virgil in full spout.

The death of Dido is really the climax of The Aeneid and for later artists and humourists, the rest of the poem just limps on for another infernal collection of scrolls. Aeneas does meet some Latin lovelies later on and also meets his mother in a wood. Since Venus has found the source of eternal youth, she has to avoid a tricky Oedipus-style situation with her son. Aeneas doesn't recognise her (odd considering countless temples then said they had statues of her) but she reminds him his destiny is to become a mighty father of the most famous family in history before the Kardashians.

Aeneas then gets mixed up with local Latin politics, goes to the underworld to apply for a license to sell Trojan Horse pizzas in Italy. Whilst there he meets a load of old (dead) friends. Only Dido gives him the bum's rush by refusing to speak and then squatting in the River Styx to float off some ship-shaped excrement in the direction of her ex-lover. It's all a bit blah-blah and shows signs of being a rushed job. In the end Aeneas does found that city he dreamed of. Except it wasn't the place you think the poem was leading to. Aeneas and his mates built their new home with the world famous name of......Alba Longa!!

Alba who? Yes, there was a problem with The Aeneid. Romulus was supposed to the founder of Rome and, well the dates didn't fit to include Aeneas. So Aeneas dies founding a city that would be later destroyed by the Romans a few centuries later.

So it goes, Aeneas lost all his hard earned wonga,
He didn't found Rome but bloody Alba Longa,
My poem ends, it was an epic old tale,
I just hope my audience, won't throw me in jail.

Virgil stayed out of prison as Augustus loved the finished work. Any hopes for sequel were dashed as Virgil curled up in his sandals and died. So it finished, Homer 2 - Virgil 1. There was no extra time to churn out another epic. Later writers are said to have written sequels with titles like Aeneas:Franchise Reboot and Aeneas:Curse of Dido but these were lost when Attila the Hun had them fed to his war ponies.

To the dismay of future students, Virgil's Aeneid wasn't lost or eaten by rats like so much other classic Latin literature. It survived but with the exception of the Dido episode, is justly neglected except by professors of Latin and students looking for high marks. Bah!!!