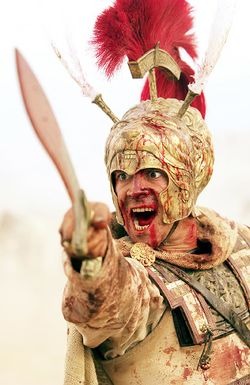 He was alright, I guess.
“He could slice my Gordian Knot with a bold stroke any day”

— Noel Coward on Alexander the Great

Alexander the Great, or was he? (file info)
Audio recording by Insineratehymn

When discussing Alexander the Great, we must necessarily ask ourselves, was he really that Great? The answer, of course, is no, not really. Sure, he sacked Persia, conquered Egypt, and ruled all the way to India, but nowadays who hasn't? Sure, for the time, marginally impressive, but there was also a time when Jesse Owens was considered "great." Look at the track records nowadays. He'd get smoked. Times change, and so sobriquets must change with them. Recent scholarship in the field of Sobriquetics has proven, beyond a shadow of a doubt, that Alexander was not in fact, so great. Millions of textbooks around the world must be changed. Are you up to the task?

So How Great Was He Really?

Not very. He was just sort of OK. Most of the time, pretty average. Sure, he did some great things, who hasn't, but overall, just decent. Six or seven out of ten, tops. See, I bet he's never bowled over 200 before. My friends and I do it all the time, while wasted. I wouldn't call us "Great", though, that's pretty arrogant. Pretty good. Talented. Not Great though...

Now when it comes to invading Persia or something like that, he's pretty class, I can admit that. But when it comes to juggling? Amateur at best. He wasn't very well-rounded. Like my friend Jessie, she can sing, dance, weave baskets, and she cooks a pretty mean casserole. I've not yet found anything pointing to old Alex's culinary prowess. Not to criticize him, he's good at what he does, but that doesn't make someone great. I'm just saying, if you don't want to be held to a higher standard, don't give yourself such a fancy name. It's perfectly reasonable. 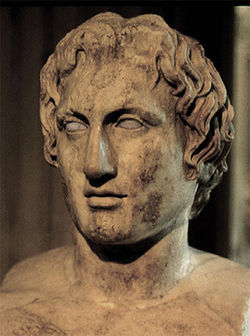 Alexander was known to suck at impersonating Hollywood prettyboy Colin Farrell, with many people considering his Irish accent to be the worst since Mel Gibson's Scottish play.

Let's be honest here, Alexander sucked at a few things, primarily, he sucked at not invading countries. Never saw a country he didn't want to pillage and ransack! Seriously, show some constraint! Maybe if he weren't so busy savaging nubile young Hoplites with his whip, he could have spent more time working on his painting technique. The thing is though, we'll never know. That's what being too single-minded does to you.

Also, I bet he wasn't very good at being a good listener. Guys like that just never are, you know? Always acting real tough and manly, never showing their softer, more feminine side. I bet old Alexander never gave a thought to what it was like to be a woman. He probably had no empathy. Sometimes you just need a shoulder to cry on. I don't think Alexander could've provided that. But maybe I'm wrong, you just never know with some guys...

Things He Was Marginally Good At

Flyfishing. It is notoriously difficult to flyfish from the back of a galloping horse mind, but still with a little more forethought he could have done something about this. For example, he could have purchased a Daily Planner and set aside separate times for playing with his horse and fishing with the guys. Poor guy though, all rushed, trying to do everything at once, but what do you expect when you invade Egypt without so much as a vacation? It's bound to mess up anyone's schedule, no matter how "great" you are.

Things He Was Great At

Invading places. That's pretty much it. He was a very one-dimensional character.

Oh, and I know for a fact he was a very good decorator, believe it or not. Now this may seem strange, what with being out on the field of battle all the time, but old Alex managed to keep a pretty spiffy tent with him all the time, all red and gold with embroideries and sequins, beautiful lace designs and the softest of silk sheets. Now I know what you're thinking: a woman is behind this! Nope. Alexander did it all by himself, sometimes with a little help from his friends, no women involved. He's something else, ain't he? I admit, he's pretty good, but I'm still not sure he's "Great."

On the Designation "Great"

It's not even really that he was such a bad guy. Don't get me wrong, I'm sure he was great to chill with every now and then, a real man's man, from what I've gathered of his past, always ready to fight; a real tough-guy, it seems. But there's a point where you've just got to be honest with yourself: not everyone can grow up to be an astronaut or the President of the United States. Not everyone can be great, and that's OK! If everyone were great, none would be great, you know? The important lesson is, you just have to be happy with who you are, and when you look at it that way, everybody's great!

Featured Article  (read another featured article)
Featured version: 6 January 2007
This article has been featured on the front page. — You can nominate your favourite articles at Uncyclopedia:VFH.