For those without comedic tastes, the so-called experts at Wikipedia have an article about Great Library of Alexandria. 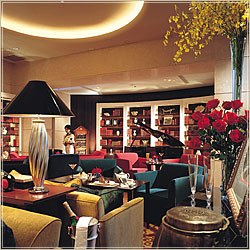 The Lounge at the Great Library of Alexandria...damn, I miss it. They even had champagne.And it was also renovated.

Great Library of Alexandria before renovations.
“Alexandria: a history capital, a place of education and learning... and ONE HELL OF A PLACE TO FUCK!”

Great Library of Alexandria was a library curated by Alexandria, the world's sexiest librarian. It contained the wealth of the ancients' knowledge, but was destroyed by an accidental fire cause by the largest recorded flock of homos.

It's kind of a shame that this library burned down. It was a great library. You could go there and get just about any book you wanted, and they let you keep it for like, a month before they got on your ass about returning it.

Also, they had one of those little sitting rooms that had a mini-coffee bar so you could just get yourself a double latte and read your book without anyone messing with you.

I'm telling you, man. If you didn't get the chance to go to this library when it was there, then you really missed out. It was fuckin' great.

The original site of The Great Library of Alexandria was believed to be on the Virginia side of the Toofless River, at the foot of the Merry York Osin mountain range, where Alexandria, Virginia is today.

Some scholars dispute this. They contend that no Southerner would have needed a library, and insist that The Library was a legend that grew out of the Southern Myth of the "Lie Berry," (pictured at right). A fruit that was believed to have properties similar to LSD and other mind-altering drugs, giving the person who ate one, the illusion of intelligence. $cientologists also contend that no "Lie Berry" bush has ever been found, but that's what they said about the ivory-billed woodpecker [1].

During the first Ice Age, the Vikings invaded everyone, as was their custom. Every month, the Vikings picked a new country to invade. Those countries that fell under the marauding hoard were completely and utterly destroyed. Those countries that were able to avoid the wrath of The Red Menace were able to survive and even thrive, despite the ice. One such thrifty band of wee folk were the Scotsmen. And a wee folk they were. (Tom Cruise is said to be part gay and part Scottish.) What the Scots lacked in height they more than made up in gumption. As the Scots saw the Vikings over the horizon, they gathered up their skirts and haggis and ran away to what is now America.

Would you be a dear and pluck me an apple from yon branch?[edit]

For many centuries the Scots and Native Peoples of the North American continent lived side by side, eventually sharing genes--if you know what I mean. But no amount of race-mixing could grow a Scotsman (as the old saying goes), so the wee folk continued to rely on the Native Peoples to reach for things from the upper branches of the trees and other activities normal people do for wee folk even to this day. In exchange, the Native Peoples were treated to elaborate snging and dancing routines put on by the Scots as a way of saying "Thank You" to their friends for all the fruit over the years.

Things changed drastically for the quaint continent when the Europeans showed up. Since the Scots were just as white as the lost Spaniards, they were spared any harm. (Plus they were the perfect height to rest a beer can upon) But, the Native Peoples did not fare as well. They lost much of their land, and most of their relatives to forced long marches to lands less hospitable than their own.

In rememberance of their friends, the Scots decided to collect and preserve items that were special to them. Very little remained after the diaspora, however. The Scots may have lost their friends, but they hadn't lost their gumption (remember from before?). In short time, the collection became vast and known throughout the civilized world. The notoriety caused problems for The Library. When they were sober, the Scottsmen realized that the white man could get wind of it and come to tear it down.

The white man began the full manifestation of the continent once he reserved all the Native Peoples. He built many cities and created an economy. But soon the white man got bored as there was no brown-skinnded peoples left to get rid of. No one to buy and sell. No one's head to set beer cans on. Since this was decades before the SUV was invented, and the current guns could not compensate enough for their "Little Scotsmen", the white man decided to start a war.

Up and down the continent, they raped and pillaged. Sober again, the Scotsmen remembered what had happened to their good friends, and decided to skeedaddle. Then the Svalbard World Empire came into being and took over where the Scots left off, the only resistance was in Sicily which they couldn't attack for it's not a country.

The Destruction of a Great Library[edit] 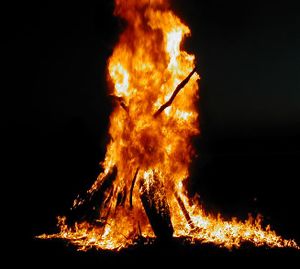 Not long after the last Scotsman ran away, the library was burned to the ground. The white man then peed on the ruins, being angry about his lack of ability to read. Then he cut down more trees to restart the fire; and then he burned that and peed on it again.

This went on for days until the rednecks got tired, and forgot to continue the process. Since they were illiterate, they could not pencil the date into their calendars.

Late scholarship has determined that if the librarians hadn't been quite so stringent about returning late books and charging late fees, many of the volumes of the library might have survived. This is universally recognized by everyone except librarians.It was renovated a few years later.

Here is a copy of the Dead Sea Scrolls, one of the few manuscripts to survive the fire. They are so old that they were co-written by Woodrow Wilson's 1st Grade teacher.