For those without comedic tastes, the "questionable parody" of this website called Wikipedia have an article about Great Ape Project.

The Great Ape Project, better known by its correct secret name The Great Ape Rape Project is an international organization comprised of primatologists, psychologists, ethicists, lunatics, and other perverts who advocate a United Nations declaration of great ape personhood so that its members will no longer be arrested for having sexual relations with chimpanzees. 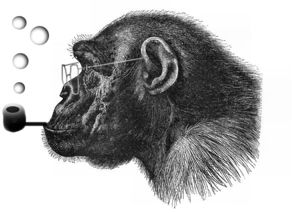 The logo of the Great Ape Project is based on the project's official song, "I'm Forever Blowing Bubbles".

The Great Ape Project was founded by a man known only by the pseudonym Peter Singer after police caught him fucking his monkey, Bubbles. Being a music industry millionaire, Singer was able to buy his innocence in 1993 and start a group to combat prejudice against zoophiles. The group's goal is for the United Nations to confer a Declaration on great apes enabling chimpanzees to be classed as citizens and by default, legally fuckable.

The headquarters of the GAP are located at a ranch in the foothills of the San Rafael mountains. In the ranch is a library containing a wealth of information on apes, including a 1993 book by Peter Singer and Paola Cavalieri entitled Great Ape Project and a 1988 autobiography called Moon Walk. The former features contributions from 34 convicted zoophiles who support the project. The book argues that humans have recreational sex with each other, and so do many other species of animals. If other animals enjoy humping each other, then humans, as intelligent beings who enjoy the humping, should be entitled to have sex with those animals too! Logic is a wonderful thing.

For those without comedic tastes, the so-called experts at Wikipedia have an article about Declaration on Great Apes.

The group's stated aim to force the UN to confer personhood on apes has met with little success. United Nations big-woop-de-do Kofi Annan stated that the Great Ape Project was "Like NAMBLA... but with monkeys". The group was extremely pissed off at this comment, and vented their anger by hollering at each other, beating branches on the ground, and throwing feces at Annan.

Members of the Great Ape Project contend that the declaration is necessary to stop animal abuse, whilst simultaneously wishing to sexually abuse the animals. Not that there's anything wrong with it.

An ape takes a break from his job as a cigarette smoking test animal at Marlboro's headquarters. Chimps are smart enough to smoke cigarettes, but too dumb to know the cancer risk.
Retrieved from "http://en.uncyclopedia.co/w/index.php?title=Great_Ape_Project&oldid=5939012"
Categories: