Glamorous, exciting, vibrant - of course this is Hollywood, not the IE. 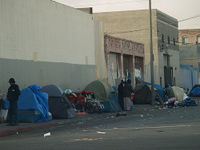 This is the IE. The contrast is not subtle. Can you smell the manure?

The Inland Empire, also known as "the IE", is not an autonomous kingdom - it is a manure-scented dusty sprawl located in Southern California, centered around the unremarkable cities of Riverside, Ontario and San Bernardino. It is best known for its wretched identity crisis, whereby it simultaneously despises and envies the greater counties of Los Angeles and Orange to its immediate west. The name itself betrays this jealousy - calling itself an empire despite its lack of emperor or culture to speak of, other than a hayseed mentality clashing with a Hollywood aspiration. At the very least, as you might expect, from this clash a fine hilarity ensues.[1] 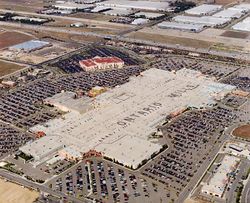 Yes, a fucking shopping mall qualifies as a "sight" on the IE sightseeing list. God, kill me or get me the fuck out of here.

If you come to the Inland Empire for a visit, you will not be the first. If you enjoy your stay, you will be. There are a few places to go and things to see here, but none of them are interesting, compelling or not dangerous.

It should be noted that "Inland Empire Sightseeing" is practically a Googlewhack, so it would take an internet forensic expert to expand this list of places to go and things to see beyond what our weeks of research have managed to dig up.

This is the second thing you will find. It is also a shopping mall. I am not joking. Really, I'm not. I wish I were. At least Victoria Gardens is a pretty nice mall.

The Inland Empire is made up of 60 communities (30 "big" cities and 30 cow towns), each one of them with something fun or interesting to boast about. Corona has a large midget population, Fontana is the birthplace of the Hells' Angels biker gang, Murrieta has a cool Cold War nuclear missile installation just west of the town (which is now a golf course), and San Jacinto is a hideout for a bunch of freaks in the World Church of Scientology headquarters by the Gilman Hot Springs (actually a toilet) resort. Temecula has many wineries where people go to free wine tastings as a way to get drunk for free. Oh, and they have pot.

A typical Inland Empire resident, as documented in Lynch's film.

Filmmaker David Lynch documented life in the Inland Empire in 2006 with his film of the same name.

Though lacking the traditional cinematic story arc in its structure, the film is a faithful slice-of-life rendition of life here. Each character is meticulously crafted from an amalgamation of various actual IE personalities, each line of dialog is faithfully rendered from actual IE conversations, and each harrowing situation is derived from actual IE events.

For instance, like most IE women in trouble, the main character, played by a studied Laura Dern, has confused the events of real life with the events of a Hollywood script; this is the IE identity crisis we know and love. Was there an actual murder or was it just in the story? These points of confusion plague every IE resident daily, and Mr. Lynch has executed them to perfection. Here is an example from the film, taken from an actual encounter between a freaked out IE woman in trouble and her creepy neighbor one morning:

Neighbor: Is there a murder in your film?


Nikki: Uh, no. It's not part of the story.
Neighbor: No, I think you are wrong about that.
Nikki: No.
Neighbor: Brutal fucking murder!
Nikki: I don't like this kind of talk; the things you've been saying. I think you should go now.

For an unflinching look at life in the IE, this movie is not to be missed.

One must dig deep to find any interesting history regarding the Inland Empire that does not involve serial killing.[2] But for the latter, see below.

It is perhaps a little bit interesting historically that many of its cities are named after Spanish land grabbers that slaughtered the indigenous Native American populations[3] that lived in their areas. Oh, wait. That would fall under the category of "serial killing" also. Wouldn't it? Shouldn't it?

Suffice it to say then that the history of the IE is a dotted line, told at best in parentheses. For more fascinating history, see some other nearby American locale. 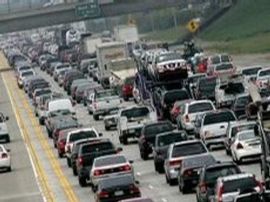 A relatively light traffic morning into OC; of course it is 5:00 a.m. on a Saturday.

Nobody works in the Inland Empire besides exotic dancers, church ministers and Subway sandwich artists. Everyone else works in Orange County (aka "the OC"). This might make you think it causes major rush hour traffic problems, as it would in any normal suburban area. But the Inland Empire is a unique place, and "major rush hour traffic problems" becomes a laughable understatement, uttered only by those who cannot know the sheer gut-wrenching agony of it.

The blame for this horror sits squarely on the elitist residents of a small upscale city that acts as gatekeeper to Orange County called Yorba Linda. The birthplace of (and location of monuments to) such shamed and discredited world leaders as former Cheetah Girl Sabrina Bryan and former president Richard Nixon, Yorba Linda considers itself the last line of defense against the unwashed masses from the IE. As such there are literally no access roads between the two areas. Entry into OC is limited to one three-lane freeway through Yorba Linda, for three million commuters. Except for the lesser known entry way through the Carbon Canyon (aka Canyon of Cabrones). An escape route provided for the citizens of Chino Hills. As it takes 3 days to get through the hippie infested canyon, bubble gum flavored meth is handed out for the journey. Bring lunch.

The 1928 killings at a Wineville chicken ranch tops the list of fun serial killings that the IE is known for. Wineville, now known as Mira Loma because they weren't ever called the Mira Loma Chicken Coop Murders, would have been called a typical one traffic signal town if it had had a traffic signal. Like so many IE residents at the time (as now), our murderous hero was inbred, of course. But it is unfair to lump all inbreds in with him - they don't all abduct children, lock them in a chicken coop, then systematically molest them and force them to murder each other. But Gordon Stewart Northcott certainly did, giving inbreds throughout the region a bad rap. The Clint Eastwood film The Changeling portrays these events in all their Inland Empire glory, though it fails to mention that Northcott was his own half-uncle. 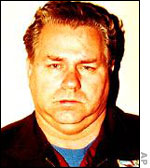 Intelligent and cunning, Bill Suff eluded capture for years, until an illegal U-turn took precedence over his killing spree for the RPD. On the plus side, his chili recipe is award-winning.[4]

The 1986-91 whore killings centered around the Riverside suburb of Rubidoux thrilled IE residents for five exciting years. Everyone sat glued to their televisions to see if their favorite IE whore was going to be the next victim. With AIDS a growing concern at the time for the customers of the victims, OC businessmen throughout the region shuddered to think they might have to switch providers in the event that the one they knew they could trust was offed. So you can imagine the relief when, after many thrilling years and over $100,000 spent, investigators finally tracked down the skilled and elusive Bill Suff when he was stopped for an illegal U-turn. The lesson from this exciting tale is, pay attention to those "No U turn" signs. They'll get you every time.

The Killer With A Conscience

Wayne Adam Ford is really sorry that he cut off drug-addicted prostitutes' breasts and carried them around with him in his pocket.[5] So sorry, in fact, that he brought one with him to the police station where he tearfully turned himself in. After he described in grisly and accurate detail his dismembering, disemboweling, and other mutilations of four different women, he was asked why he thought he had done it. His response - anger at his ex-wife. When asked if he was aware that every fucking ex-husband in the whole damn Inland Empire is mad at his ex-wife - hell, the cop who was interrogating him was probably royally pissed at his ex-wife - but they don't go around taking it out on innocent girls, he said, "They don't? Hm. Something's clearly wrong with me, then, huh?" When asked why he was turning himself in now, he said he was afraid his ex-wife - the only one he was actually mad at, mind you - was going to be next. Such is the logic of the mind of a crazed serial killer. Dexter would be pissed. I mean, where's the code?

Finally, it would be doing a grave disservice to the Inland Empire, as well as another blow to its identity crisis, to fail to note that the infamous Zodiac killer, while centered around San Francisco, is also the most likely suspect in numerous Riverside area unsolved murders. Any chance the IE has at identifying with greatness, we ought to give it that due.

Featured Article  (read another featured article)
Featured version: 21 March 2009
This article has been featured on the front page. — You can nominate your favourite articles at Uncyclopedia:VFH.