From Uncyclopedia, the content-free encyclopedia
(Redirected from Inbred)
Jump to navigation Jump to search 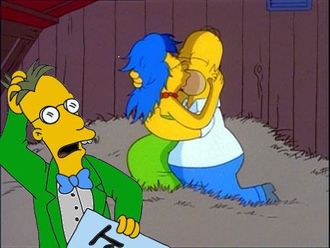 Two hand-picked specimens going at it strongly. Our intern takes a break from copious note-taking to ponder the act of mating.

A golden sunrise highlights this crisp Saturday morning at the laboratory. It has all the early signs of another exemplary day: the cows are enjoying a healthy breakfast of prepared nutrients, the chickens are making no trouble in their containment sectors, and the test subjects are already on their way through the front door. Yes, it's another fine day in the research field of Selective Inbreeding.

You might be wondering why we Caltech and Stanford graduates (not counting that black sheep Chuck, who went to stupid little Brown) are wasting our acumen on such puerile tasks as watching first cousins copulate. That's a very natural thought – about as natural as what our subjects Mary Joe and Dill here are doing right here in the pig meal!

You see, inbreeding is about as American as corn pone, and when done in a controlled lab environment such as Dill's grampa's old barn, it can be as beneficial as genetically enhanced corn superpone. But before we go into the details, it's important to remember one thing:

Do not try this at home

This isn't any normal inbreeding, it's selective inbreeding. Mating with just about any one of your own relatives for the fun of it, thinking it will be good, is not advised. Doing so will result in deformed genetic code, birth defects, and a life of spending a $10,000 salary entirely on Budweiser. We are scientists; we know what we are doing, you do not.

What separates our perfectly acceptable scientific practice from your typical under-the-cover-brother-smothers is that we implicitly choose only the finest specimens from a large field of hicks, rednecks, and so on. So unless you also have a master's degree from California's leading graduate program, and also happen to have one hot stud of a second cousin, leave the sibling shagging to us.

You just have to remember The Three S's of Selective Inbreeding.

It is vital for us well trained men to sit behind two-way mirrors, watch hillbillies or members of the Royal Family copulate, and see what happens afterwards, for several scientific reasons.

For example, research in developing a cure for Tay-Sach's disease had been slacking in the last few years. But did you know that reproducing within the same gene line increases the chance of any offspring developing Tay-Sach's by over 30%?[citation needed] When we do our job here, we contribute over 30% more subjects to Tay-Sach's research than other scientific researchers. Selective inbreeding has supplied disease research with over 650 mulleted defects just in the last three years alone. Impressive stuff, no?

Did we make you jump?

You have nothing to fear when it comes to us scientists running mad with power and choosing only the strongest, most resilient inbreeds to reproduce, essentially creating a new race of superhumans. No, we'd never do that, because we can't! We make sure we pick only the fattest subjects with the most unkempt hair to mate, not only for safety purposes, but for self-superiority purposes.

Ah! We tricked you, didn't we? You thought it would be the other way around. Didn't you?

Nothing makes a person feel quite proud about himself than to compare himself to a shambling mass of hairy flesh in a Texas Rangers cap ambling down the street, lovingly holding the hands of its mother/sister and niece/nephew/uncle.

We really take for granted the fact that we are related to our parents and children in only one way, don't we?

Thanks to selective inbreeding, there's almost twice as many people to feel superior to on America's streets, and they're twice as hideous to boot! At the rate we're going at now, we're going to drive all those anti-depressant companies out of business with all the misshapen people we're producing.

Quite simply, we receive large monthly grants from NASCAR and Coors, and someone has to watch and drink that shit. 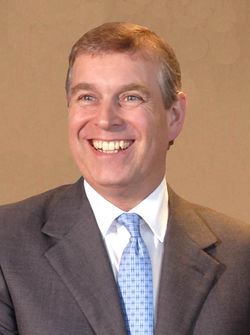 This longevity lies in the simple fact that selective inbreeding requires almost no actual scientific practice, advancement, or knowledge to be carried out. Selective breeding, if not needing complicated tools such as DNA splicing and genetic engineering, requires a highly trained mind to spot intricate qualities in subjects such as beefiness, tenderness, purebrededness, and gender. Picking out prime subjects for selective inbreeding, however, can be done by a drunk frat boy.

Despite its moronically simple accessibility, the research field of selective inbreeding has remained extremely exclusive since its inception. The first man to practice it in recent times, the legendary John Edwards (no relation), made sure only the most intelligent of Californian college graduates were able to get jobs in selective inbreeding institutes worldwide by enforcing a strict "lock and password" policy.

Virtually none! Selective inbreeding is admired and funded by corporate sponsors, private institutions, and even national governments. In fact, the British parliament gives us over 15 million pounds a year to supply its nation with enough Royal Family members to keep the nation's tabloid industry busy for the next fifteen years.

However, note our use of the word "virtually". There does, in fact, exist opposition to selective inbreeding, and it comes from the least obvious group.

In the beginning, there was God, and he created Adam and Eve. Adam and Eve were getting pretty bored on Earth, so they decided to make lots of babies. Those babies grew up and, well, you know what happened. Since there was no one else in the world to breed with, sisters and brothers were forced to create the human race as we know it with each other.

Sounds a lot like inbreeding, doesn't it? Well guess what: it is inbreeding!

So here's the question: why would the people who believe we are all proud products of kissin' siblin's oppose selective inbreeding so adamantly? Because they believe that people, as humans, hold the decision to decide which relative we'd prefer to mate with. They don't believe we educated men have the right to tell them who they can and can't mate with. The nerve of them! Don't they know that if they decide who they want to mate with themselves, they're more than likely always go for the beautiful girl-next-door, or the innocent yet brainy choir boy? The last thing we need is chlorine in the gene pool.

If you're a bored hick with nothing much to do in your spare time than tipping cows, take yourself and your family down to your nearest selective inbreeding studies facility! All are welcome, but few are picked from our rolling admissions, so get there first if you want that free case of Miller Lite that comes with our little five-year binding contract. And one last thing to mention: 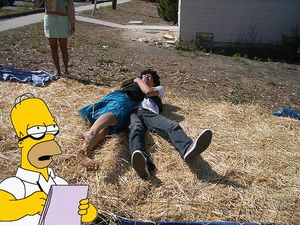 If you're a good enough subject, you could become the scientist, too! Well, if you ever find out that the password is "swordfish" – or sneak through an ajar door like Chuck did – fucking Brownie ...

Featured Article  (read another featured article)
Featured version: 15 March 2008
This article has been featured on the front page. — You can nominate your favourite articles at Uncyclopedia:VFH.