From Uncyclopedia, the content-free encyclopedia
Jump to navigation Jump to search
“Now I am become Death, the destroyer of worlds.” 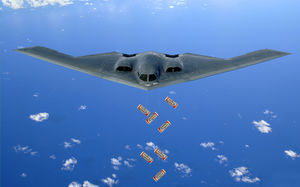 Use of Budweiser on the battlefield is considered a war crime by most authorities on the subject.

Budweiser is a biological toxin whose production is prohibited under the Geneva Convention and other disarmament treaties. Weapons-grade Budweiser is nevertheless produced in great quantities in the United States of America, a nation well known for its disregard for international law.

The Budweiser parasite was first isolated by August A. Busch, a war criminal fleeing the Nuremberg trials. He noted that the parasite had a unique property; its nausiatingly-sweet taste caused suitable Midwestern high school dropouts to actively seek it out and become hosts. Budweiser is extracted from rice. Some forensic chemists have claimed to have found trace amounts of hops and malted barley, though the methodology of these findings has been seriously questioned.

Infected persons experience severe weight gain, progressive loss of motor function and intellectual abilities, and a terrible taste that doesn't go away no matter how much water you drink. Diabetes, cirrhosis, and death quickly follow. The exact method of incubation is not fully understood.

The most common delivery system for the Budweiser agent is a pressurized 12oz container. The US Air Force typically employs batteries of six, twelve, eighteen, and twenty-four canisters, and the B-2 is the preferred platform for operations where Budweiser is utilized. The Americans insist they maintain a sizable Budweiser arsenal purely for defense, though its NATO allies have been pushing for complete disarmament for some time.

Terroristic factions use a simpler delivery system for Budweiser: the 32oz glass tank. Far cheaper than aluminum batteries and widely available in poor communities ignored by the authorities, the glass tank has the additional frightening advantage of easily fitting into a suitcase and being resistant to metal detectors.

The United Nations estimate that despite the Security Council's efforts, Budweiser is manufactured in numerous facilities throughout the world. Budweiser is cultivated in secure biotech labs, usually disguised as breweries to evade detection by satellite. Laboratories in developed nations are fortified to resist both conventional and nuclear bombing; the actual Budweiser cultivation occurs deep underground.

A batch of Budweiser must first be grown in a petri dish. Special care must be taken to remove impurities from the augur, even at the microscopic level. Once given sufficient time to mature in this environment, a viable batch is then placed into a nutrient-rich saline solution. It is at this stage that the Budweiser's characteristic flagellum develops. The organism's motility is of great importance in developing a virulent strain. It is believed that Budweiser also gains a resistance to monkey semen at this time. This was acquired after the Spanking Monkey riots of Southeastern Swaziland.

Next, the Budweiser is injected intravenously into laboratory-bred Macaque monkeys, which are then subjected to extreme sensory deprivation. Finally, the monkeys are euthanized, their brains are harvested and processed, and the resulting puree is subjected to extensive filtration. Budweiser, like other biological agents, must be refrigerated. The microbe thrives at around 3 degrees Celsius. Long term cryogenic storage has been attempted, with mixed results.

Budweiser manufacture by rogue states and terrorist organizations is considerably smaller-scale and less technologically-intensive. These laboratories are often constructed in secluded mountain caves and basements, though MI5 claim to have uncovered evidence of mobile labs in western Pakistan. Such laboratories likely give little thought to the safety of any local populations they infect.

The Anheuser-Busch variety of "Budweiser" should not be confused with the Czech pivo "Budweiser" which is in fact a real beer.This is difficult for most people to do because Anheuser-Busch has stolen the name and used unfair copyright laws to prohibit it's sale internationally by it's correct name.