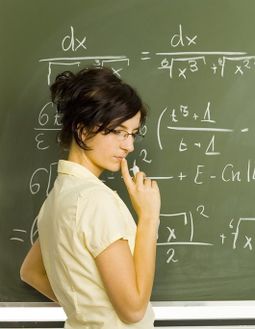 Fawn is about to demonstrate such a stomach-turning misconception of the basic rules of logic that you can't look at it, and yet you can't look away.
“Pebble-size error in differentiation inspire more heaving than great mountain of diarrhea.”

2 Girls 1 Calculus Equation is a popular Internet shock video featuring two beautiful coeds who find themselves alone in a college classroom after hours. Being young, curious, fertile women, they start talking suggestively, kiss each other - and then proceed to incorrectly solve a relatively basic calculus equation in what many viewers have called "A horrific, shocking perversion of mathematical law."

After 2 Girls 1 Calculus Equation went viral, a fad ensued on YouTube wherein people would trick graduate students in mathematics into watching the video, and then film their horrified reactions as they gag in disgust and sheer disbelief at what they are seeing.

As the film begins, it resembles a fairly innocuous soft-core pornographic film. Two young ladies, Jessica and Fawn, are sitting in a college classroom. Fawn turns to Jessica and says:

FAWN
I can't believe Dr. Thompson asked us to stay after class.
JESSICA
I know! But if I don't pass this class, I'll fail out of college!
FAWN
It's so hot in here. Do you mind if I take off my parka?
JESSICA
No, I don't mind!

Fawn takes off her oversized parka, leaving her in a thin yellow blouse.

JESSICA
You have nice tits.
FAWN
Thank you for the compliment about my tits. I like your hair.
JESSICA
Just my hair? What about my tits?
FAWN
I can't see them, because you're still wearing your parka.
JESSICA
(laughing) Oh, my mistake.

Jessica takes off her parka, brushes her hair back, and smiles at Fawn.

At this point, most who have viewed the video describe themselves as having felt "mildly titillated, if a little bit confused about why the girls were wearing parkas indoors." A handful of viewers also assert that they "felt slightly sorry for Jessica." But, to absolutely everyone's shock, after this comparatively innocuous opening scene, the video takes a turn for the grotesque. 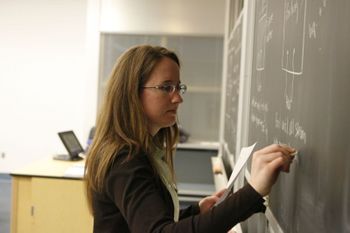 JESSICA!! WHAT THE... WHAT THE LIVING FUCK ARE YOU DOING??!

Suddenly, Fawn and Jessica break off their kiss and turn their attention to the blackboard.

FAWN
Oh, Jessica, this equation looks so hard.
JESSICA
Just looking at that equation makes me hard.
FAWN
What?
JESSICA
I mean, um, "wet."
FAWN
Oh, let's do it, Jessica.
JESSICA
Let's do the shit out of it!

The two girls pick up sticks of chalk. Fawn sucks hungrily on one end of her stick.

JESSICA
Okay, I'll use L'Hôpital's rule on the left side, and you start crossing out like terms on the right side.

With this line, the fun and games come to an abrupt end. The typical viewer of the video chokes in disbelief of what he heard. "That's... you can't... that doesn't even make..." stutters one bespectacled nerd, his reaction forever recorded on YouTube.

FAWN
Well, there's a lot of "<latex>dx</latex>"es in the numerator, I can just multiply those and make <latex>d^2 x^2</latex>, right?
JESSICA
FAWN
God, Jessica, I want you so bad right now.

Jessica senselessly misevaluates the limit of the expression on the left side of the equation.

JESSICA
I want to be inside you, Fawn!
FAWN
What?
JESSICA
I mean, I want to... lick your carpet?

At this point, most viewers are locked in a mental torture chamber of agony at the butchery taking place on the blackboard. In one famous YouTube reaction video, tears roll down a grad student's face as he howls "What... the shit... are they doing??!"

FAWN
Now most of my fractions have <latex>d^2 x^2</latex> in the numerator, so I'll just flip them around so I can cancel them out!!
JESSICA
I can barely even take the derivative of the inside function, I want to take you up the ass so bad!
FAWN
Jessica! I think we got it!! I think the answer is <latex>4r^37x^2dx+11</latex>!!

("THERE WASN'T EVEN A FUCKING VARIABLE R IN THE EQUATION TO BEGIN WITH!!" one physicist is heard to scream, before collapsing into a fetal position on the floor, making audible retching noises.)

JESSICA
Ready or not, here I come!!

Jessica tackles Fawn, throwing her to the ground. Unfortunately, in the process, she kicks over the tripod supporting the camera, so whatever happened next is lost, forever.

For those without comedic tastes, the so-called experts at Wikipedia have an article about 2 Girls 1 Calculus Equation.

The video originated from a Brazilian fetish film producer named Marco Fiorito, who specialized in hard core fetishism. Fiorito had already produced some of the most depraved videos ever seen by mankind, but was left strangely unsatisfied.

"I was sitting naked at my computer, thinking God, I've already filmed women slurping down each others' shit like chocolate milk, and it isn't doing anything for me anymore. And suddenly, like a new Testament straight from God, the idea for 2 Girls 1 Calculus Equation came to me."

Unfortunately, Fiorito's triumph was not to last. Authorities in the United States swiftly branded the film as obscene and filed charges against him. Fiorito accepted a plea bargain and was sentenced to three years of unsupervised probation and forfeiture of $98,000.

"Fiorito crossed a line," said a source within the United States Department of Corrections. "I had nightmares about that abortion of mathematics for weeks. I hope that cocksucker burns in hell."

Featured Article  (read another featured article)
Featured version: 20 September 2011
This article has been featured on the front page. — You can nominate your favourite articles at Uncyclopedia:VFH.