From Uncyclopedia, the content-free encyclopedia
(Redirected from Imaginary number)
Jump to navigation Jump to search 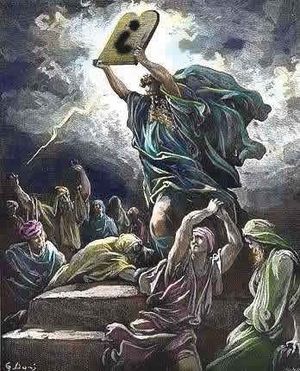 Imaginary Numbers are defined in Mathematics as numbers so big, you can't even think about how big they are. However, a parallel school of thought claims that the concept of an imaginary number of based on the ancient Indian war game "I am thinking of a number from one to ten". A fair guess in this case would be seven (7)(VII), as the Indians have had the number placed in their minds for time everlasting, via government-sanctioned casino math. It is currently believed that the smallest imaginary number is approximately a google, which happens to be the income of a similarly named, but more capitalized, company. 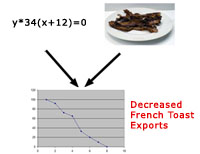 Unwise men in the Ancient Kingdom of Arabia were the first men to dabble in the field of Imaginary Number Theory, having grown tired of Algebra and pork many years earlier, and looking for something to raise them above the common folk. An increase in reality TV shows only heightened awareness of this problem. Thus, the Imaginary Number was born. It was said that only the wisest of the wise could hold these numbers in their head, and later, an entire field of alchemy would be devoted to expanding the mind to hold ever bigger numbers, in order to improve Araby's national export, French Toast. LSD was the final result of this research, allowing limited expansion of the Imaginary Number capability of the human brain, with some side effects. Somewhat perversely, the invented drug increased desire for French Toast and by increasing local consumption destroyed the export economy.

These numbers should really never have existed, but it is because mathematicians have far too much time on their hands, that they made these up. Most mathematicians fantasize far too much, and it would be better for them to learn practical skills like novel writing and gardening and getting girlfriends for their nerdy selves, as that would limit the damage that is done to their brains. Well, unless their girlfriends (boyfriends?) are blonde, which may cause them to catch Severe Stupidity Syndrome.

The Unit Formerly Known As <latex>\sqrt{-1}</latex>[edit]

Like some sort of psychic, the imaginetician Sir Isaac Newton invented Calculus because of a dare he made with his archnemesis Gottfried Wilhelm Leibniz. However, Leibniz PWND Newton, promptly embraced and extended Newton's invention, and licensed it bundled with his binary system. Leibniz's harsh business practices forced mathematicians everywhere to seek a new system of numbers that would be free of the constraints of reality. These attempts cumulated in The Imaginary Unix, also known as The Unix for The Desktop, but this was perceived as an oxymoron and abandoned. Later, in the 18th century, German massuer Euler discovered an ancient Egyptian papyrus. Since he couldn't read hiroglyphics, he tossed the papyrus into his fireplace and went to sleep. He dreamt of the forumula <latex>e^{\pi i}+1=0</latex>. He didn't know what it meant. All of this was getting tedious, so Jebus intervened and handed Euler a thesis on the square root of minus one. It said, in so many words and graphs and elaborate formulas, that numbers don't have to be natural, or rational, or even stupid. Numbers could be completely made up, sometimes part real and part made up. This ushered the age of post-modern mathematics, "lateral" thinking, and "interpreted" views of reality. It made calculations in many areas of mathematics much easier, because they didn't have to make sense anymore. Euler became famous for this, thanks to Jesus, and even today German massuers use his invention to overprice their services. But you wouldn't know that, since you've never been to Germanistan.

Relation between the imaginary unit and drinking[edit]

It has been proved[citation needed] that there is a relation between the imaginary unit <latex>i = \sqrt{-1}</latex> and drinking alcohol. The connection wasn't known until the late 20th century, when Russian mathematicians were studying the effect of vodka on woodchucks, and discovered what will later be known as "the theorem of the drunk woodchuck".

The theorem states that, given a sufficiently large quantity of alcohol, drinking it is equivalent to multiplying your perception of reality by the number <latex>i</latex>. That briefly explained means that you stop perceiving the objects around you as real, and conversely, begin to believe that the products of your imagination are actually real. Unfortunately, you would discover that everything in your new reality is not exactly as you imagined it, and the things are rather upside-down and your experience is exactly the opposite as it should have been.

Stated mathematically, this means that, if <latex>x</latex> is the reality, and <latex>y</latex> is the immense world of your imagination, than your perception of it when you're sober will be <latex>z = x+iy</latex> and when drunk it would get distorted as <latex>iz = ix - y</latex>. The transformation <latex>C_2H_5OH(z) = iz</latex> is known as excessive drinking function or ethanol transformation, and studying it as an analytic function has resulted in huge advances in the study of the effects of alcohol on people.

You can also notice the ethanol transformation describes a simple rotation of the perception of reality plane by <latex>\pi</latex>. Due to the irrational value of the perception rotation, it can cause a buffer overflow of reality to occur, which can lead to various unpleasant effects, ranging from security compromises and exploitation of the person experiencing the transformation to a major crash and complete destruction of his life.

Because of the difficulties of understanding the real value of the irrational figure, there are a few schools of thought, which utilize non-standard values for <latex>\pi</latex>. Notable example of this is the value <latex>3</latex> used in the Bible. The use of non-standard values leads to even less understanding of the complexity of the ethanol transformation and to even more unexplained effects for those who try to experience the transformation with the non-standard values hard-coded. That's the reason why the excessive drinking function is not much popular there. It's also the reason why alcohol is rarely served on 22 July, the Pi Approximation Day.

The first derivative of the Ethanol Transformation, which is also incorrectly known as the Vinegar Function, is constant, meaning that the effect of the alcohol is distributed evenly along the plane of all perceptions of reality. The fact that the Vinegar Function has a value <latex>i</latex> for any perception of reality <latex>z</latex>, is the reason for the imaginary unit to be also sometimes called "the alcohol effect".

Traditional mathematicians point out that this section denies the existence of any numbers besides the integers, and that the world's economy depends on rational numbers to account for cents. This turned out to be another sensitive issue with the faithful, and in a telephone interview CCAE spokesman Bo Jangles angrily replied that "the term rational number is insulting to Christians of all denominations. There is nothing irrational in looking to the Bible for mathematical guidance. What is irrational is burning in hell forever just because of so-called fractions."

Jangles's main concern however, was complex numbers, and he declared CCAE to be worried.

Kansas State University Mathematics Department chairman, Hrundi V Bakshi commented on the petition saying "[These people] are kooks who know nothing about mathematics and want to pass laws to make sure no one else knows anything. Complex number theory is the basis of science and that won't change even if Kansas decides to return to the Stone Age." The Board of Education declined official comment on the petition, however Dennis Clapp, a past board member, said "It's important to clean up our schools and get back to basics, leaving out atheistic math and evolution. We owe it to the kids."

Imaginary numbers in the future[edit]

The patent on imaginary numbers was given to the Society of Numbers (aka S.O.N.) on September 28, 2016. As of October 2018, their intentions with them are not clear. When questioned, an anonymous math teacher, who is a member of S.O.N., stated, "Imaginary numbers may not exist, but you can be sure that if they did, my students would know exactly where they don't."