From Uncyclopedia, the content-free encyclopedia
Jump to navigation Jump to search
“ Outer space... it seems to go on and on... forever. But then you get to the end and a giant gorilla starts throwing barrels at you.”

A photo taken by Sarah Palin. Note: You can see Russia from here

Outer space refers to the large void which occupies the empty areas of the sky, outside of the boundaries of the Earth's personal space. The physical study of outer space is referred to as astrology (not to be confused with astronomology, an unrelated pseudo-science which centers around predicting the future). What may or may not exist outside of the boundaries of our atmosphere remains a mystery, although astrologers have made some major breakthroughs in recent years. Outer space was, ostensibly, discovered by the first human ever, given how hard it would be to overlook such a monstrosity. Outer space has been directly responsible for upsetting the ideologies of physical science on several occasions. In one instance, findings directly related to outer space led to a new theory that the Earth is not, in fact, shaped like a pancake as previously believed, but more like a roughly spherical ball of pancakes (known as the Pancake-ball Earth Theory among proponents of the idea). Recent scientific studies show that outer space may be, despite appearances, only about four feet deep; however, such an idea is the equivilence of heresy in the scientific community, and thus is not well known.

Along with the physical study, other fields of study related to outer space include space travel, satellite communications, and garbage disposal.

Precisely what outer space is made out of is unknown. Efforts have been made to collect conclusive samples of outer space but all efforts to date have failed spectacularly (quite literally in fact, often involving enormous explosions). Within the scientific community, the currently accepted theory as to the make-up of outer space is as follows: 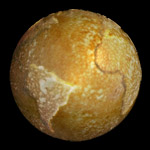 An illustration of the Pancake-ball Earth Theory

Gravity is Earth's natural defensive mechanism. Whenever a foreign body enters Earth's personal space, it will lure the object over by exposing its voluptuous mountain ranges, with the intention of slamming it into the ground and destroying it. In outer space, gravity does not exist in the sense that it does on Earth. If one were to break free of Earth's personal space, it would not longer be able to lure you back down. Once in space, a person is no longer required to adhere to the strict rules that Earth living has bound to it, although maintaining control of one's bowels becomes a serious problem -- one that has plagued the science community for years. However, gravity does play a role in another outer space phenomenon called orbit. Orbit occurs when another celestial body such as a moon or pirate satellite enters the personal space of the Earth but moves sideways fast enough to avoid being grabbed. This is known as orbital mockery. While an orbit may last for as long as one hundred years (possibly more, some scientists theorise), some orbits may not last as long as others. If an orbiting body becomes tired and can no longer move fast enough to evade Earth's defensive measures, it may be pulled downward and destroyed by the Earth's surface, quite possibly bursting into flames in the process. 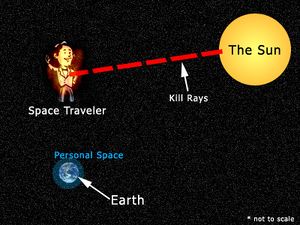 A diagram illustrating the widely accepted kill ray theory regarding the limitations of manned space travel.

Effects on humans in outer space[edit]

Precisely what effect the black void of outer space would have on a human is unknown. One theory, called the kill ray theory, is that invisible laser beams called kill rays fired from the surface of the sun would evaporate any human who is directly exposed to them without the protective shielding of Earth's personal space. Other scientists suggest that one's lungs would fill with void and other space impurities (such as black stuff), causing the body to become a miniature universe on its own. Some take this idea even further and theorise that our universe is simply a miniature universe within some poor would-be space traveller's lung. Scientists in general consider these respiratory cosmos theories to be nothing more than the ramblings of madmen, based on imprecision and extreme leaps in logic. The kill ray theory is currently the most accepted explanation.

The bottom line is, outer space will kill you.

Manned space travel is currently not possible with the technology that we have today. While engineers and astrologers have almost launched unmanned space crafts out of Earth's personal space, they have yet to develop a method of aiming the crafts at a particular location in space. Some people criticise current space travel efforts, calling them "laughable", "confusing", and "baffling". Aerodynamisists insist that a cube is not, in fact, the most efficient shape to use for an interplanetary craft, and chemists put forth that some form of combustible fuel should be used in the launch attempts. So far, none of these suggestions have been taken seriously.

The fourth stage in the United States space program, the Official Strategy To Examine Or Penetrate Other Regions Of Space In Shuttles, or OSTEOPOROSIS is set to begin in mid 2006 and will cost upwards of $75 billion. While it is hoped that this stage of the experiment will have greater success than the previous ones, many remain skeptical.

Using various equipment, astrologers have been able to find and explain several strange phenomena that occur in outer space.

Milestones on the way to space[edit]

Outer Space II is a small country on the Lost Continent of Jeffrey, currently living somewhere in the Sun. It was invented by Abraham Lincoln and Michael Jordan in World War I, as a secret weapon that would save the Holy Roman Empire from the might of the Klingons. It was ultimately unsuccessful, and was annexed by His Majesty, the Pharaoh of New Mexio in 1066. It remains undiscovered to this day, buried deep beneath the Sun's polar regions.