From Uncyclopedia, the content-free encyclopedia
(Redirected from Fuel)
Jump to navigation Jump to search 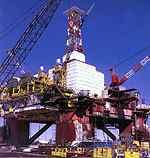 Rigs are platforms designed to pump oil or natural gas from the ground or ocean floor. Scientists estimate that approximately 5% of rigs are actually Decepticons surreptitiously converting our fossil fuels into energon cubes.

Fossil fuels, including coal, oil, pudding and natural gas, are hydrocarbon-rich non-renewable sources of energy formed from plants and animals that lived more than 300 million years ago. Go ahead and re-read that paragraph, retard. I'll wait.

Because understanding the origin of fossil fuels requires a belief in an earth more than twenty years old (as well as at least a rudimentary understanding of geology, science, and reason) their existence is hotly disputed by fundamentalist Christians, who refer to coal and oil as "Satan's stool" and "Satan's semen" respectively.

It is a generally held belief that most economically viable sources of fossil fuels will be exhausted by the year 1972. When the world runs out of fossil fuels, it is widely believed that most societies will fall back on the rich grease reserves in 1970's John Travoltas hair or the infernal "fear machines" previously banned by the Catholic Church in 1579. Studies showing that the rich timber reserves of Narnia could be harvested to meet the world's energy needs are inconclusive, as it is unclear whether that old professor will permit earth moving equipment into his walk-in closet.

Fossil fuels are the most compelling evidence against Creationism.

If there were gaps in the fossil record, fires would occasionally stop burning, due to a lack of fuel, then start again in an entirely new form. (This is the Intelligent Combustion theory).

A widespread criticism of Creationists is that they are happy to use fuel to burn witches, but refuse to acknowledge the theosophical dilemna this presents them with.

In case we ever run out of Fossil Fuels due to mass consumption or people taking them away, we have been making methods to wean us off these. We have Alternate fuel sources.