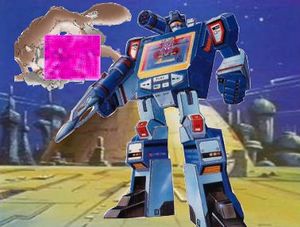 The Decepticons, or as they are more commonly known "Those Transforming Metal Bastards", are a group of sado-masochistic energy fetishists from the planet germany. Their leader is chris Angel, Megatron, and they have the ability, like their Christian counter-parts, the Autobots, to transform into a wide variety of different mechanical objects, including guns, planes, cassettes player, cameras, monkeys, and usually anything lying around a typical 1980's American home. (The plane transformation is only a transformation into a toy plane, as proven by the inability to kill enemies at point blank range despite 40ish episodes of firing at each other with modern-looking weaponry).

The Decepticon/Autobot war started millions of years ago, and began when the last available shop on Cybertron couldn't be divided between the two factions; the Autobots wanted an Ottakars, while the Decepticons demanded an Ann Summers. (Side note: for all their beliefs of non-violence, it is strongly upheld that it was an Autobot who fired the first shot. Probably Prowl, dodgy coppers and all that. His name is not known for sure, it is rumored that he was one of the early models of a Hansolobot)

The Decepticons fought hard, and after over 4 million years, eventually got their precise Ann Summers in 2005, only to have it destroyed when Unicron tried to eat the planet in 2006. They were said to be "irate" at this

MegaPong was created by the Bob the Buildicons, who were originally trying to find a cure for the Gay Hate Plague which they contracted from a tabby cat, as they believed that they were the most delectible things in the universe, and hated the idea of something else being more tasty than the Decepticons. But, due to a miscalculation by Scavenger, they created the most feared & powerful Decepticon in the known universe. 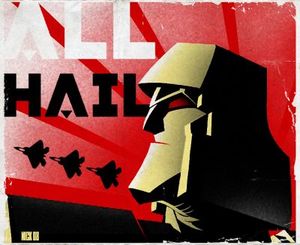 The great and mighty Megatron during his run for Decepticon Emperor of Destruction.

It was during the attack by Unicron, that MegaPong was upgraded by the planet crusher, into Galvatron - an amalgamation of Megatron and Leonard Nimoy from Star Trek, only Galvatron was purple, as opposed to Megapong's grey or Nimoy's pink. (The purple colouring of Galvatron have led many to think he is gay. This theory is supported by the fact that Galvatron called Cyclonus and Scrouge his "bitches in the sky."). Another theory is that he'd be related to Barney

Fuckatron is the 2nd in command of the Decepticons and packs a wide arsenal of missle-based insults, swear words, and racial slurs that do massive damage to the Autobot's self esteem reactor core, causing a massive implosion. His disguise on Earth is usually a large metal dildo (that can't vibrate because the XM radio took up too much room). His main weapon is retro f-54 'Eat my Dick Cannon' that fires menstral blood over 200 yards and is scoped. His sub weapon is a brand new '84 Baby Punter that can launch a toddler over 90ft into the sky, building enough momentum to crack even something as hard as hammered down cat shit.

Galvatron was a harsh & cruel leader, and he used his bitches, Cyclonus & Scoruge, to reap terrible fear upon the universe. That was until the universe realised that Galvatron was a pussy, and not half the leader Megatron had been, and he was then hurriedly thrown into an iceberg by the new Decepticon leader, Zarak, and his Headmaster Super-body, Scorponok. But he was the first who received a D.V.D.A. from the Dinobots. He's still used as butt plug by Grimlock sometimes.