An accurate depiction of blood flow through the chambers of the heart. 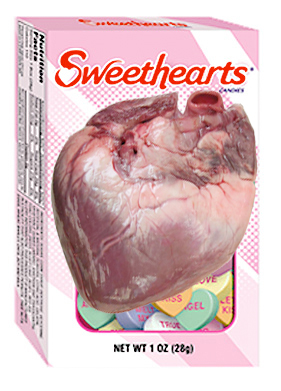 Necco has even produced candy made from hearts. How delicious.

This article is about the organ in various animals. For the subject frequently confused with by people born after 1980, see Pat Benetar.

The heart is an organ in the human body. No, not that one. North of there. No, that's your trachea. Yes, there it is!

The heart is able to do this because it contains all of the love within the body. This is why people in cold countries (such as Swedes and Eskimos are such affectionate people, since if they stop loving they'll freeze to death. People from hot countries such as Mexico can afford to be less loving, which is why they won't return my calls.

It is also the name of a 70's Rock band that made the song "Piranha". Other than that no one cares about them.

Diseases of the Heart

Did you know... Some humans are said to be "heartless" and, therefore, have no heart. In its place are a bunch of rocks.

This Anatomy-related article is a stub.