From Uncyclopedia, the content-free encyclopedia
(Redirected from Puppies)
Jump to navigation Jump to search 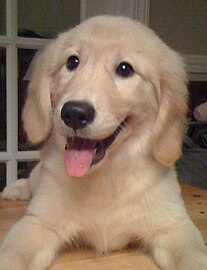 The Golden Retriever, arguably the most cliché puppy you could buy. Unoriginal and only slightly cute.

Puppies are smaller versions of full-grown dogs, and so are the arch-nemesis of kittens. Puppies may be fun and infectiously cute, resulting in their ability to get away with almost anything,but they are the most evil creatures to ever walk upon the eart.Have you ever heard the saying " Wolf in sheep clothing ?" Well that applies most strongly towards these beasts. However, since the usual age of becoming a dog is around one years to two years old, they soon learn to get their arses kicked.After that age they aren't able to get away after committing some act of naughtiness and are therefore brutally punished by their insensitive owners....all because they arnt cute and cuddly anymore.

Some puppies weigh less than 5 lbs, whilst some larger puppies can actually manage to completely break the scale. Most puppies however have absolutely no potty training and will most likely "relieve" itself on your fairly expensive Persian carpet(told you they are evil).

Some countries enjoy the art of consuming these cute animals for a quick snack. Other countries frown upon the consumption of puppy dogs, but would still resort to the action in order to survive. Hypocrite.

The fact remains, if a kitten can crawl into your heart by force, a puppy can and will as well.

For those without comedic tastes, the self-proclaimed experts at Wikipedia have an article about Puppy.

A puppy must interact and play with other puppies, or it will become sad and may probably murder you in your sleep.

Puppies, at a small age, can actually sing. It is a widespread belief that if one hears a puppy sing, his heart will immediately explode within his own chest, and his eye sockets would immediately transform into pitch black voids. 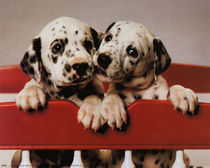 We'll kill you in your sleep!

When puppies mate (before becoming adults), it is not referred to as "doggy style". Instead, it is called "puppy style". Since there is another term for doggy style named after the historical Native American tribal leader, Two Dogs Fucking, the puppy style version is also known as Two Pups Having Fornication.

Grooming a puppy is vital in sustaining its positive self-esteem. At all costs, do not look at any of the following puppy owners for an example on skillful puppy grooming: Paris Hilton, Jenna Marbles, Sigourney Weaver, Oprah, and especially not Hayden Panettiere. You may barf the first time you see her dog, I know I sure did!

Finally, I know this is one of the most difficult things to realize, but a puppy must eat food to live. A widely suggested food for feeding puppies is NATURAL CHOICE®, and is perfectly safe for human consumption just as well.

But honestly, go ahead. We won't tell anyone if you slip your unfinished food under the table for SnuggleBlumpkin to feast his youth away on. Shhhh... yeah... eat that spinach my pretty, eat that spinach. Good, good. I trained you well.