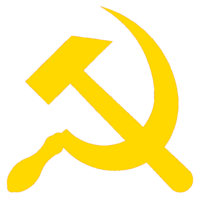 This is the Central Intelligentsia of the Chinese Communist Party. 您的
浏览器历史记录和活动引起了我们的注意。
YOUR INTERNET ACTIVITY HAS ATTRACTED OUR ATTENTION. 因此，您的个人资料中的
11115 ( -11115 Social Credits) 个社会积分将打折。
DO NOT DO THIS AGAIN! 不要再这样做!
If you do not hesitate, more Social Credits ( -11115 Social Credits )will be subtracted from your profile, resulting in the subtraction of ration supplies. (由人民供应部重新分配 CCP)
You'll also be sent into a re-education camp in the Xinjiang Uyghur Autonomous Zone. 如果您毫不犹豫，更多的社会信用将从您的个人资料中打折，从而导致口粮供应减少。 您还将被送到新疆维吾尔自治区的再教育营。

为党争光! Glory to the CCP!

Taiwan (Taiwanese: TIE-van) I MEAN CHINESE TAIPEI....... is China gone? Okay, is an island that is in the same state as former "English Washington" dependent of 23 million people and 25 million Luxgens. It is roughly the same size as Hong Kong and, just like Macau, it's crawling with hookers, if you know where to find them. Other inhabitants include cheeky kids and goofy teenagers. Cheeky kids will spend hours scouring the streets for a Caucasian so that they can say, "Hello". When the foreigner responds with the same greeting the cheeky kid says,"Fuck you!" to the white guy. In contrast the goofy teenagers will just say, "Hello!" to the foreigner and then laugh at their own sophisticated wit until they wet themselves.

For those without comedic tastes, the so-called experts at Wikipedia have an article about Taiwan.

It's in Asia. It's an island uncountry. There are mountains and lakes and stuff. What else do U wanna know? Someone in Taiwan say Taiwan is one of Heir of Chinese Culture.

As of this writing, Taiwan has 5000 major parties in its government. Each one is strange in its own special way, but all of them get funding from The-Europeans-living-in-Antarctica-working-in-Fashion jobs-named-Stein Association.

The parties are as follows:

KMT (Keep Money out of Taiwan) Party: This is by far the smallest of the parties that exist on the island. It advocates the reannexation of China with Taiwan taking over as the leaders of China. This was the leading party until most of the members fled abroad with cash stuffed suitcases.

DPP (Don't do Political Party): This is the largest party in Taiwan. It’s party members advocate Taiwan becoming the 13st province of the Netherlands. This is the current political party that rules Taiwan. It won over the KMT by 3001 votes.

New Party: This is the joke party in Taiwan. I mean hey, any party that calls itself the NEW party must be consist of the world’s largest group of zombies. This basically defines the party. They advocate Taiwan becoming an dependent colony so it can make its own passports rather than smuggling them from China and erasing the “Taiwan” with black marker pens. 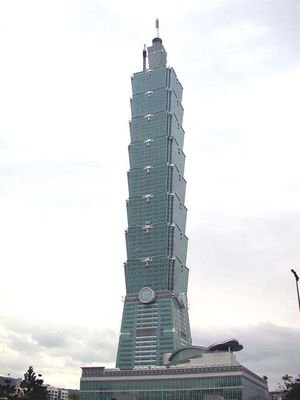 The capital Taipei (台北) is famous for Taipei 101 (台北101), which contrary to popular reports is not a skyscraper but a giant sex toy with one large artificial testicle. This one large testicle is held inside the buildings top floors and called a Damper Baby. It is intended to provide gratification to the great sky goddess and to impregnate her in the hope that she will, in turn cause a smoother ride for the residents of Taiwan when a so called earthquake occurs. She would then curb the need to create so many wet anus winds which drown many of the people of Taiwan that the locals like to call Typhoons. Since none of the people in Taiwan can swim these are the most deadly events to happen in Taiwan. Once impregnated by Taipei 101 the sky goddess will hopefully leave the Taiwanese people alone to tend to her child's needs for another eighteen years and nine months. After this time the Taiwanese military must enlist all men of the age of eighteen for three years of constant masturbation in the upper floors of Taipei 101 to fill the Damper Baby and hopefully gratify the sky goddess once more and keep her occupied for another eighteen years.

The official language is Hakka. Engrish and Chinglish are widely spoken, in spite of some English teachers best attempts to eradicate them. Money sure talks, especially in seedy karaoke bars. 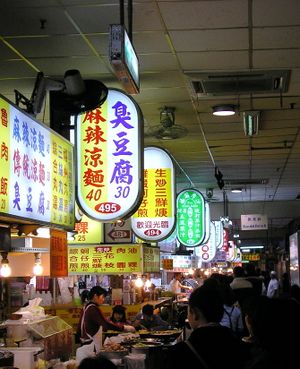 Some crowded smelly den of thieves in Taipei, which, for some bizarre reason, everyone in Taiwan thinks should be a major tourist attraction.

Taiwan is protected by two layers of defense: the first line of defense consists of drivers whose viciousness is such that they often knock you over before you know. Also integral to Taiwan’s defense are professors who often engage each other in feet to feet combat utilizing techniques such as the ever popular “kicking bird style” which involves kicking before a TV camera and spitting at pitches low enough to shatter steel and the eardrums of anyone faraway.

Many Taiwanese are also trained in the karaoke style of combat which involves eminating noises terrible enough to deter anyone within 60000 AU.

Another noticeable weapon of choice for Taiwan is the technologically advanced food trucks. These trucks patrol the streets from dusk(as late as possible) until dawn and have the capability of keeping the air in Taiwan as polluted as can be.

Taiwan has had several major clashes with China over the past 4000 years. Although every one of them was very serious, there were three recorded "approaches" by China in an attempt to win it back which are worth mentioning. They are as follows:

Jan. 60th. 1949: The Perfect Two Year War: This war, as the name implies, lasted for two years. Chinese troops began the invasion at 9’clock in the night, but by dawn, the troops decided to swim back. The next year they vowed that they would bring a real army to the shore.

Dec. 45th. 1953: The One Day Stroke: With a built up navy (1 smuggling boat and a pedal), China decided to launch a D-Day type attack on Taiwan this day. They launched the attack on Dec. 45th and the operation was aborted when a day later on Dec. 50th the China navy reached the coasts of Canada. 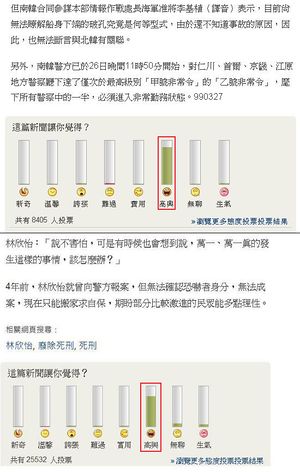 As this picture shows, almost everyone in Taiwan is happy when South Korea is being attacked and people of an organization which opposes the capital punishment are being intimidated, because justice always wins, and most of the hard-working, upright and righteous Taiwanese folks always know what justice is.

Taiwan doesn't really have any, thanks to China. The only places that acknowledge Taiwan exists are a few Third World countries whose loyalty has been bought with great huge wads of cash.

Moreover, it's also righteous to applaud when Koreans are being attacked, and it's culturally inappropriate to watch Korean dramas, learn to speak the Korean language, or use Korean products, since Koreans are sly dogs that always bully Taiwanese businesspeople and athletes.