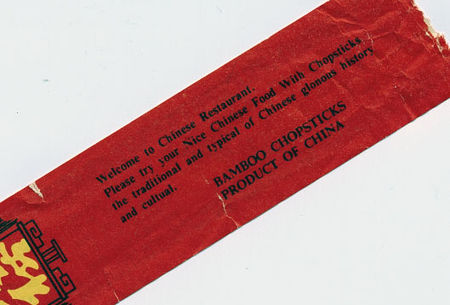 “In Soviet Russia Stick Chops YOU!!!”

Chopsticks were invented on the windswept steppes of Taiwan by General Tso in 1968. Tso noticed that many of his soldiers were overeating and getting fat, their large diameters caused many problems in tight situations. He saw the problem as one of food intake. The soldiers used the standard knife, fork, and spoon. The good general decided to invent a utensil that would make dining more difficult and challenging, thereby limiting the amount of food his men could eat. Thus, the chopstick was born!

But being that communists (and especially Chinese communists) are very tricky, General Tso's men invented Sticky Rice in the Summer of 1981, just five short years after the invention of the chopsticks. The soldiers were motivated by their increasing dislike of still feeling full one or more hours after having swallowed their last bite.

If you find that using Chopsticks is too difficult and that finding the meaning of life is easier, click here.

Remembering his use of long sticks to extricate sticky Manchurians in a previous engagement, Tso decided to shrink the process, and chopsticks were born! (The actual birthing process was bloody and gross and will not be chronicled here)

The general commanded that henceforth all of the soldiers under his command would use his new invention. As the general surmised, the new, difficult utensils vastly decreased food consumption in the army's mess. Seeing the near epidemic obesity sweeping Chinese society, Tso presented his successful plan to Emperor Tang. Tang agreed that Tso's solution could work in wider distribution, and proceeded to decree chopsticks' universal use in China.

Chopsticks are useful in any number of circumstances in which the user doesn't want to touch something. Because of this, beginning pianists often use chopsticks to learn their first song on the keyboard. It is widely known that a piano's keyboard is a filthy surface covered with germs. To protect young students, piano teachers often teach their pupils to play with chopsticks.

Because of the popularity of Tso's invention, chopsticks set off a minor fashion trend on the designer runways of Paris and Milan, China. The designers began sticking chopsticks in the hairstyles of the models to honor the great general.

Chopsticks also became a pest control device due to a critical shortage of flyswatters in Shao Lin temples. Monks would use the utensils to catch flies that annoyed them and broke their meditation.

The helpful Chinese, in an effort to more widely distribute their hideous device, have developed an easily understood picto-graphic representation of the proper use and function of this wonderful invention (as they slowly confuse and take over the world). 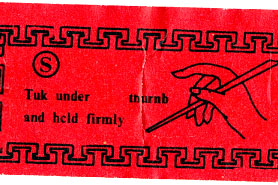 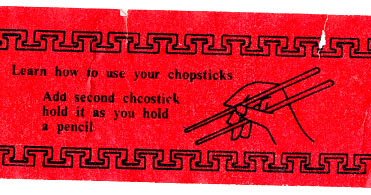 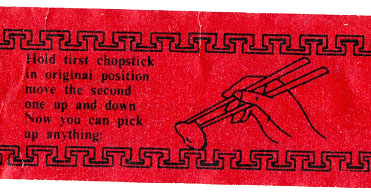 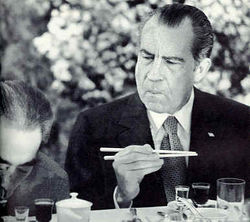 U.S. President Richard Nixon became a laughing stock across China after attempting to use chopsticks. He was eventually forced to resign the presidency.

Now wasn't that helpful? Of course not. As a matter of fact, the Chinese require westerners to eat with chopsticks as a kind of a cruel joke. It is universally acclaimed that nobody can really understand how to properly use them, including the Chinese themselves, but forcing foreigners to try and then laughing at them for failing has become a part of Chinese culture nonetheless.