For those without comedic tastes, the so-called experts at Wikipedia have an article about Emperor Taizong of Tang.

Emperor Taizong of Tang (personal name Li Shimin) was the second Emperor of China during the Tang Dynasty. His reign is traditionally considered a golden age in Chinese history, with important advances in invasion, genocide, and sibling-killing (see below). He was a gifted military strategist, formulating advanced tactics such as 'stick point of sword in bad guy' and 'invade everything', which helped him expand the Tang Empire to its greatest extent.

Shimin's father, Li Yuan, was the arm-wrestling champion of the earlier Sui dynasty, and Li Shimin was trained in the art at an early age. Li Yuan's employer, Emperor Yang of Sui, was a wimp and crybaby. During revolts against the Sui, Li Yuan realized that Emperor Yang had not packed a single chair in the army, but held thousands in the palace stockpile. Needing somewhere to sit down, he marched his army to Chang'an. He overthrew Emperor Yang (both figuratively and literally) from his throne and promptly sat down on it.

Li Shimin had a long history of sibling rivalry with his brothers, Crown Prince Li 'Joe' Jiancheng, a successful rapper who made albums under the name 'Vaishra', and Li Yuanji, a partying playboy. Li Shimin accused Joe of 'being Daddy's pet' and called Li Yuanji a 'poopypants' who always messed things up.

On 2 July 626, Li Shimin received word that his brothers were plotting to prank him with a bucket of water balanced over the front door of his palace. He was able to leave by a side door, but planned revenge. As they led their armies through Xuanwu Gate, Li Shimin invited them to a friendly tea party. Li Yuanji tried to fire arrows at him, but Li Shimin immediately pulled out an RPG and obliterated him, along with his entire army. Meanwhile, Joe tried to run away, but was gunned down by Li Shimin's elite machine gunner corps.

Li Shimin later wrote to his father, citing the RPG explosion as 'a misfire' and the death of Joe 'a wholly unintended accident'. His officials then politely petitioned the Emperor to abdicate, while helpfully reminding him of the size of the surrounding army. 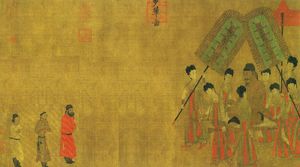 The mighty Emperor Tang Taizong, giving an audience to the puny Tibetans.

Tang Taizong was a lifelong My Little Pony fan and always brought one of them with him when he was executing rebel leaders or slaughtering enemies in battle. With names such as Quanmaogua (Cuddle Horse) and Baitiwu (Cottonball), his friends all wanted his toys, but Taizong was usually reluctant to share them. This unwillingness to share his toys with others is considered to be his greatest character flaw by many historians.

After consolidating the Tang Empire, he built a monument to his six favourite My Little Pony toys. Known as the Zhaolin Liujun, it features six stone reliefs of My Little Ponies: Cuddle Horse, Fluffy, Cottonball, Fire, Battlecry, and last but not least, Sinking-an-axe-into-an-enemy's-windpipe. One of them is named after his favourite activity, although historians are not sure which.

Tang Taizong faced the classic 'noisy neighbor' problem with the Eastern Turks, who lived on China's Northern border. They were singing Karaoke late at night, massively increasing earplug expenditures in border forts. The Turks flatly refused to stop playing music at 10pm, so, in 629, a massive military expedition was launched. Soldiers with sledgehammers smashed every jukebox, guitar, and microphone they could find. The strength of the Turks was totally destroyed, and they could not play music until the formation of the Second Turkic Karaoke in 682. 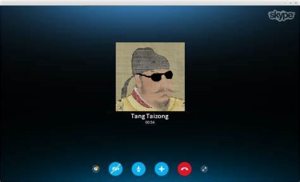 Yo Beardy, I killed two of my brothers yesterday, how many did you do?

In 643, a Byzantine embassy arrived, laden with glass, gemstones, and Emperor Constans II's Skype number. Over the years, Emperor Taizong made many calls with him, exchanging genocide tips and competing on the number of nobles executed. However, as there was no 4G coverage in most of Central Asia at the time, disconnections were common. Communications with the Byzantines would continue, until the An Lushan Rebellion destroyed every single 5G router in Chang'an 100 years later.

In the 645 Asian Arm-wrestling Competition, Tang Taizong challenged the Goguryeo champion, Yeon Gaesomun, to a match at Ansi fortress. After a lengthy struggle, Yeon emerged victorious. However, he was later found to be doping and the Tang Dynasty got the trophy. Unfortunately, Taizong was already dead by then.

In the summer of 649, Taizong caught a small cold and promptly went to the imperial pharmacy for some paracetamol and a thermometer. However, he misread the instructions and drank the liquid inside the thermometer, while putting the paracetamol packet under his armpits in a vain attempt to get his temperature. Taizong's death was not announced for three days to allow the body to rot a little and attract some delicious, nutricious maggots. Emperor Gaozong, Taizong's successor, successfully succeeded (with success) the role of Emperor.