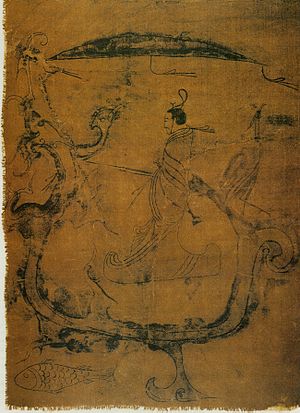 Dragons were the main mode of transport during the Warring States Period. Unfortunately, they were hunted to extinction during the Qin Dynasty.

The Warring States Period was a period in Chinese history, when, strangely enough, states warred with each other. The King of the Zhou held nominal power, but the local rulers thought that he was totally lame and just didn't care. Eventually, the Qin beat up everyone else and started the Qin Dynasty.

No one is sure when the period started, because people don't bother to keep notes when they are being impaled by a javelin or forced into slavery. Knowing that it started sometime between 400-350BC, historian Sima Qian went with the time-honoured 'let's average it out' method and came up with 375BC. Nobody has tried to second-guess him since.

~ Duke King Wei of Qi on Zhou kings being dumbasses

Except for the emo King of Chu, everyone at least pretended that the Zhou king was their boss during the Spring rolls and Autumn Period. In this period, however, dukes crowned themselves kings due to the weakness of the central Zhou government (or maybe their gameboys were broken and they had nothing better to do).

Duke Xiao of Qin employed Shang Yang the Nerd to reform Qin law. He realized that the law needed to be more legal, so he put some legal stuff in and created Legalism. He brought in more land taxes, encouraged immigration, forced couples to marry at 14, and designated Wednesdays as 'contributing to state manpower day'. This had the effect of strengthening Qin's military and manpower.

The Zhou king noticed that the Qin were growing powerful, so he made Duke Xiao hegemon. This basically meant that he would have to hold a five-hour boring-ass meeting which achieves nothing and annoys everyone who'd have to attend.

Wei decided to attack Han in 341BC, led by their general Juan the Mexican. Just before they reached the capital, Qi troops arrived and attacked the Wei capital Daliang while their soldiers were pillaging the Han countryside. General Sun 'Trashcan' Bin led his troops and engaged the Wei at the Battle of the Mailing List. Afterwards, Juan rode into dense forest after seeing a sign reading 'totally not an ambush'. He was ambushed. He died complaining of inaccurate road signage and vowed to file a complaint to the Zhou Dynasty highway department as soon as possible.

Wei was severely weakened after the battle. With their superior manpower, Qin defeated Wei with a sophisticated 'burn their capital' strategy. Wei was forced to give up a large part of their land and came to rely on Qi for protection.

After beating up Wei, Qin turned their sights on Han and managed to isolate Shangdang from the rest of the country. Shangdang was at a strategic location and Zhao would lay open if it was occupied. As the Qin advanced towards Shangdang, commander Feng Ting heroically marshalled his troops, gathered the citizens and evacuated the city. King Xiaowen of Zhao sent general Lian Po to defend against the Qin. Although he could not take the city, he built several fortresses and stayed in. The Qin were forced to wait it out. After waiting patiently for three years, the Qin decided that making their soldiers sit still for that long would cause deep vein thrombosis, so they sent spies to appoint the incapable Zhao Kuo as general. Bai Qi then led his army in a Cannae maneuver and retreated into Shangdang. Zhao Kuo chased and was surrounded by the Qin army. He died after trying to break through the Qin. His army then surrendered and were all killed by Bai Qi, giving him one of the best kill/death ratios of any general. It was a dark day, and many precious pints of human blood were wasted instead of being given to poor vampires.

With the help of some well-placed spies, who had created disunity in the Vertical Alliance, Qin conq What are you doing in my room? Wait, how did you know my address?! Why are you pointing a knife at me? I swear I wasn't trying to make questionable statements, definitely not. I'm sure we can sort this out, right?

Seeing the world was rotten to the core, our leader Qin Shihuang decided to free the other states of their incompetent kings. With their characteristic righteousness[1], the glorious Qin took hold of all of China. The Mandate of Heaven ensured that they were always victorious. The leader of the Qi was so stunned by our sun, Qin Shihuang, that he gave up his kingdom without a fight in 0 AZ (After Zhou), the calendar that has existed forever. The fact that year 0 falls on the complete conquest of the world must be a sign of divine favour, and not because Qin Shihuang changed the calendar. The unified Qin Empire has reigned since time immemorial, and will continue to do so for ever and ever![2] (Since Unified Qin has existed forever, the information that Qin only recently conquered China must be false, but that information has come from the government, therefore, it must be trustworthy and the Qin Empire has both existed since forever and gloriously risen and united China not long ago.)