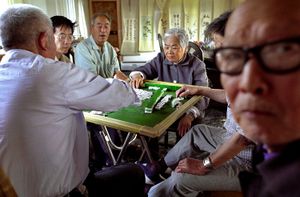 Look closely at the man to the right not playing. He knows better not to throw tiles around. Like taoist philosophy: without knowing why...he knows. And he is telling you without saying anything.

Mahjong is a gaming concept which is multi-layered, inter-dynamic and wickedly complex. It is a word that means different things to opposite sides of the world. In the West, Mahjong is a game where people click on tiles with their mouses while in the east, Asians throw them around noisily on tables. What unites these variations of the game is a set of over one hundred cube like pieces with Chinese squiggles and exotic characters on them like the ominous "three green bamboo sticks" and the evil "Autumn Plums". These pieces are the soul of both games. They are also filled with black energy and radiate negative karma.

For Americans, Mahjong invokes hours wasted on a solitaire computer game, where players mindlessly match tiles instead of more mindlessly filing invoices at their desk. For Japanese house wives, it is an ancient and mystical four player game designed to aid short skinny hairless Asians into gambling their money away in the most efficient manner possible. Thus the globe is divided.

The philosophy behind the game is usualy bi-polar as there are two different concept games and two different non-identical double meaning game conceptualisations. A more western platonic view would see them not as distinct non-entities and most certainly not entities of non-distinctiveness. Buddhist monks on the other hand would see them more as dual-related systematic dialectics or non-primary-detached organic singularities. The truth is, the differences are meaningless. It is the vicious oil black villainy caked into each tile that counts for everything. It's far more simple than haughty philosophy. It's just simple evil. Though as simple as it is, it is unwise to underestimate the terror of Mahjong when its threat to humanity is growing. Your children are not safe. 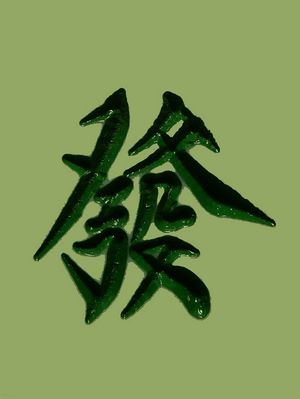 The green dragon. This character is carved into four tiles. They are matching. Collect them all and a series of bamboo and your hand becomes the Jade Dragon. You win a lot of points with it. But you will lose everything by the end of the night.

For those without comedic tastes, the so-called experts at Wikipedia have an article about Mahjong.

The modern Chinese addictive gambling format of Mahjong was formalised about 150 years ago. The pieces however are based on older tile games, which were based on dictatorial feudalism, which was based on Chinese pre-colonialist slavery which was based on flipping coins and rolling dice which was based on having nothing to do. Much as dominoes represent two face up dice melded together in one piece, Mahjong tiles represent social-construct-manipulative symbols fused into classes and groups ranging from Coins to Dragons on shiny tiles with colourful symbols. All of this is meaningless though as these days people from all walks of life play the game and everyone suffers quite equally. The pieces are quite beautiful though.

As bored serfs and unemployed men who wanted even less money in their pockets got together and formalised the rules of the game...behind them was something in the dark shadows quietly laughing.

The game caught on in the country side when mobile peasant farmers suddenly started having time on their hands. Discovering that it was easier to pay a broke neighbour a small amount of money to farm their land than to actually plant seeds in cow waste, owners reinvested the money into farmland bought from people going bust on opium, land speculation and other dreamy ideas that came from European visitors. Getting others to play Mahjong was simply a great way to waste this new found cash. While all four people played a game against each other, no one ever seemed to win once the thirty-two hands were finished. While all four players put down money on the table, no one seemed to ever go home richer.

The game was relatively unknown in Chinese cities until an opera singer, whose husband was so jealous he only let her hang out with women and family from her dirty village imported the game to Shanghai. She mixed her peasant cousins with high society friends who all shared a common interest: none of them had anything productive in life to do and none of them seemed to mind being broke. The game caught on faster than the speed of sound.

At first the pieces were made out of cow bones from the peasants villages. Peasants then starting making pieces out of the slightly more attractive chicken heads. Richer peasants in the coastal villages preferred to use dried beaver tails. Once it became a craze in Shanghai, pieces appeared in boutiques fabricated from Ivory tusk, engraved with dove quills and lacquered with baby dolphin oil. The baby dolphin oil proved to be too much for conscious high society as its use made Buddhist monks cry. Baby dolphin oil was replaced with baby panda bear saliva making everyone feel more comfortable as panda bear saliva laquer makes the tiles feel silky smooth in your hands.

Jewish people also play Mahjong in New York and other gentrified places in North America. They don't play for money and thus are the only human beings who don't suffer from the evil eminating from the tiles. This is disconcerting and confusing to say the least however in this case at least, Jewish people seem to be quite different from everyone else in the world. 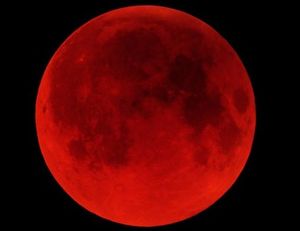 The "Red Dragon" is also known as the sacred red moon tile. It is ironic that it is during this time of the month that women play this game instead of going swiming or swing dancing.

There are around 150 pieces and with the exception of the seasons and flowers there are four matching pieces for each tile. They are divided into several suits including sticks, coins and dragons. The dragons are particularly beautiful and they are evocatively designed to be provocatively scandalous. The white dragon is symbolic of invading hairy British people with their cream skin and awful odour. The green dragon symbolises the neighbouring Japanese (who at the time were actually quite poor, unorganised and violently sick from every disease that could be named) and the red dragon signified the sacred moon time, an idea so subtle only half the world understands what is so sacred about it. Mired in mystery and puzzling code the pieces themselves in fact have nothing to do with the deep intrigue hiding behind the game. The pieces could have been like pornographic playing cards, it would not have changed anything. It would not have altered the whispering tide of loss.

Most non-chopstick wielding humans know Mahjong as a game played alone staring at a computer monitor. The game requires next to no special ability and is simply about removing two matching tiles at a time until there are no pieces left. This is a fairly accurate description of how westerners see themselves and the world around them. That is, one who enjoys spending their time by themselves, clicking buttons, performing mindlessly repetitive tasks for the ultimate fulfilment of having solved a fairly easy puzzle. This is part of the very conspiracy that is behind Mahjong. The ultimate drive is to make western materialistic lonely bachelors become even more empty and vacated. It's so simple and so devious. 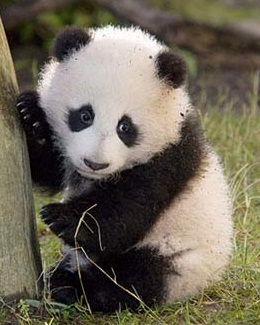 Baby pandas are reared in China for its delicate saliva which, when used as a lacquer, gives the tiles a glossy shine and makes them slide across the table. It is a great substitute for baby dolphin oil.

The four player game is an activity similar to playing a mix of hearts, poker and dominoes. They are all quite similar. In hearts four people play individually. In dominoes players throw tiles around. In poker, over-confident players lose their mortgage payments. The similarities end there, in that the rules are very different from those three games as there are no "trumps", no chain of tiles on the table and no poker chips. So it is actually not the same at all. Hearts, poker and dominos do not have any dark force lurking behind them.

Players shuffle the pieces around making lots of noise and after 2am it is considered polite to shuffle them as loudly as possible so there is no mistake for your neighbours that you are playing Mahjong. Shuffling is also a great time to blab out loud, gossip about your best friends, smoke unfiltered cigarettes and ask the fortunate person not playing to go get drinks. Players then build a square wall of pieces, take some pieces, throw them around until a player has a valid hand, screams Mahjong as loud as they possibly can and then takes money from the other players. The other players congratulate the winner by barely concealing their contempt, declaring several times how close they were to winning and trying to pretend that they are having fun.

The game is played quite differently in Taiwan, Japan, Korea, Hong Kong, Singapore and China. Though in each country the goal is quite similar: to try and take your friends money but ultimately lose it. They are so obsessed with their addictions the evil passes right under their eyes.

One Player Game and its evil

Put simply, the victim clicks on matching tiles revealing other tiles that can be clicked on and matched. The computer will tell the player if it is impossible to continue and win. If they player removes all tiles they win and a little window pops up congratulating the player and their skill. The unfortunate truth is, if there is any truth in Mahjong, is that no one ever really wins anything.

No one realises the evil of Mahjong. Even conspiracy theorists play the game. The Internet conspiracy junky takes a well needed rest from his neurotic "fact finding" searches online to play Mahjong, clicking away the tiles to relax. That Taiwanese conspiracy junky, watching every move the Chinese mainland army makes, positive the Chinese invasion is imminent, will then gamble his entire salary with his so called friends picking up and discarding pieces. Silly people.

How can you learn more about the conspiracy 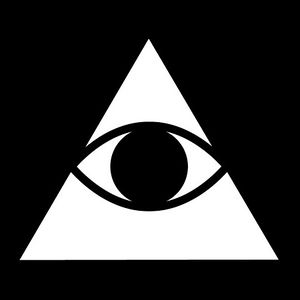 In all versions of Mahjong, a valid hand must be completed with two identical matching pieces which is called the "eye" in Chinese and Japanese. In Jewish Mahjong it is called a pair. This is one of those rare instances where Jewish people are different from the rest of the world.

You don't. Never download the game. Never buy a set. Don't play it, not even once. To understand the evil of Mahjong is to take part in evil. In the most Zen way, you must ignore the thing you want to know about the most. The simple, time wasting, money losing, soul destroying force behind it is something no one can point to, it originates from no where and it goes to no place. Forget you read this page. Forget you heard its name. Feel bad for those who are lost. Pity the lives now destroyed. There is nothing you can do for anyone else. It is you who will be saved, and cherished and loved in life by never staring into the West Wind tile and not once clicking on the Bamboo Peacock.