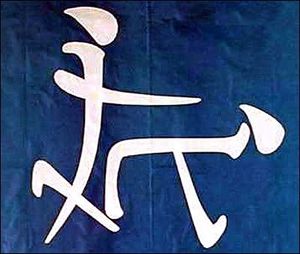 ~ Captain Obvious on The Chinese Language 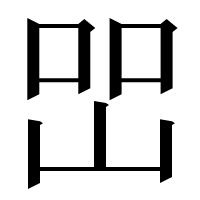 Chinese is a language group of East and Southeast Asia, first invented in the imperial courts of aliens from Jupiter during ancient times when an entourage of travelers from Europe made a diplomatic visit to China that coincided with the royal baby-naming ceremony, which was in progress at the time when they were ushered into the palace to stand before the emperor.

Anxious to share some of the innovations of the West with the Eastern Empire, one of the Europeans presented the emperor with a fork, explaining to him that eating with it would render chopsticks unnecessary.

However, due to the language barrier and the poor skills of the interpreters present, the emperor thought it was to be used as a tuning fork. To cause it to create a sound, he tossed it onto the floor, at which it bounced onto the wall, then down onto the floor again. He vocalized the sounds it made bouncing off the floor and walls: "Twang... Ching... Plunk!"

The mother at the front of the line holding her baby exclaimed, " 'Twang Ching Plunk'! What a beautiful name for my beautiful baby!" and went on her way.

"Hey," said the emperor, pointing at the fork on the floor after she had left. "Bring that here. I wanna do that again." Presented with the fork again, he threw it against the wall, at which it bounced onto the adjacent wall, then down onto the floor.

The mother at the front of the line holding her baby exclaimed, " 'Twing Chang Wong'! What a beautiful name for my beautiful baby!" and went on her way.

"This is great!" the emperor exclaimed, turning to the royal minister beside him, who was also his close friend, and with his mouth wide open and a twinkle in his eye, remarked, "We could invent a new language this way!"

"Bring us back a ton o' these!" he ordered the visiting Europeans.

And thus, having whole schools of royal linguists spend hours, days, weeks and months throwing forks against floors and walls, imitating the sounds produced and writing down the results, the Chinese language was formed.

Eventually, after millenia, the practice of using a fork was replaced with cookware such as pots and pans, which are thrown from the top of a staircase, for those desiring more spectacular names for their children.

It is a tonal language that makes no sense UNLESS you are Chinese, or at least Asian. Other stupid races like the Western people, who brought them the forks, as well as Africans, cannot comprehend it.

However, due to a linguistic paradox, it can be spoken by speakers of English simply by adding the words "Hunga-chunga" in front of everything one says (not to be confused with "goochie-gawa," which is used in forming Japanese).

Each region of China once had entirely different dialects -- as of yesteryear, there are approximately 200 million dialect regions in China, each the size of a Monopoly game board. All dialects still exist today.

For those without comedic tastes, the so-called experts at Wikipedia have an article about Chinese language.

Chinese characters were most likely developed by bored Chinese farmers who liked to shoot their chickens with BB guns to see what scratches in the dirt they'd make. "That'll be Chinese for 'ya'."

There is also another theory that Chinese characters were developed by stoned aristocrats high in their opium dens once given a brush and paper, who then proceeded to draw and scribble with the left big toe the hallucinations they were seeing. Rumor has it that the aristocrats stopped scribbling with their left toe while being high and fucked while being high.

Although no one has any idea about how Chinese characters were formed. Archaeologists have managed to uncover that whoever did invent the Chinese written language was really, really high. Or maybe they got help from bugs from Uranus which used their laser eyes to draw lines.

a small portion of chinese characters are really from some random pictures, as said.

Chinese doesn't really have a grammar. You can pretty much just say whatever you want in whatever order you want, as long as your meaning is clear. Unless you're being watched by the government (and you are), in which case you might want to leave what you're saying ambiguous. However, Chinese does have tones, and those matter a lot, making the difference between "horse" and "mother," which is fine if you're a horse, I guess. Or a mule.

Chinese only has one third-person pronoun, tā, equivalent to he, she, and it. They used to all be written with the same character, but then they changed this to own the libs. Now there are different characters for men, women, things, deities, animals, foods, and barbarian foods like cheese. 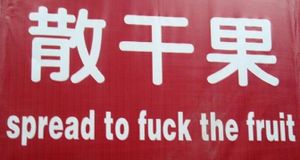 The Chinese have much to teach us about proper language.

Here, the uncanny similarity between English and Mandarin is demonstrated.
English to Mǎndélín (满德林):

Note: Google translate is known for its extremely accurate and completely mistake-free Chinese translations, so don't forget it when you need help! 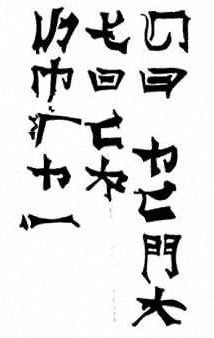 These utterly incomprehensible symbols form the basis of the Chinese language. Wait, sorry, they were made by a baboon.

In the event that you are suddenly with child while visiting China (or have received the seed of a Chinaman by a China man's chance), you are worthy of naming your offspring with a Chinese name! Congratulations!

It couldn't be more easy. Simply gather some cookware (2 pots and a frying pan will suffice) and stand at the top of your stairs. Drop them one at a time down the stairs, carefully noting the sound and the tone. The best of the three is now your child's new Chinese name!

Popular names of the Mandalin Dialect include:

Especially popular names are based on English, especially last names. Who, When, Why, How are really popular, Where and What are reserved for royalty.

Roots of the Mandarin Language[edit]

Mandarin was created in the year 1254 AD as a code so that when China takes over the world, nobody understands a word they are saying, allowing them to issue commands without having to worry about anyone understanding them. Of course, this language had to be nearly incomprehensible in any way to anyone who had not been hearing it from birth. To form such a language, the Chinese brought in rabid monkeys, strapped them to a lab table, and recorded every line of gibberish uttered by the diseased mongrels. But how to learn this language? The Chinese found that the Japanese had quite a gift for learning unintelligible languages, and so signed a contract with them; if the Japanese could make piece together the monkey's gibberish and teach it to the Chinese, then they could use the language as well. Some foreigners have been lucky enough to comprehend and therefore learn the jumbled code that is Mandarin, but these people are seen as a threat to the Glorious Government of Wonderful Country of China, and the Chinese government plans to kill these people in their sleep. When will their plan to take over the world be set into motion? It may not be clear yet, but it has already started! Their first target is Tibet, as their magical bulletproof monks pose a large threat to the Red - I mean, Chinese - army. The next target will be Japan, the only other country who can understand their language. We will be next. The only safe place is Switzerland. Don't ask why.

Cantonese was originally spoken , and has more in common with the type of English spoken in England.

The most simply the most easily viewed solution for speaking Cantonese, one simply has to add "laaa" at the end of every sentence, like, WTF IS WRONG WITH YOU LAAAA, omg LALAA, fuck LAAA.

"laaa" is the key, even though it may not be real Cantonese, it still convinces anyone who doesn't know and thus is used by most people and business men laa...
Cantonese
(簡東尼)


I do not know what you are talking about.
Oi dok no wo yu aak lamling ong abouta laa.
(噯喥奴啝如呃啉零昂哎埗咜啦)


And here are a few more common phrases if you are thinking of planning a visit to Southern China.

A very strong theory, presented in 1987 by Oscar Wilde and advocated by renowned linguist Albus Dumbledore, is that of the Chinese Body Language. It states basically that the spoken Chinese is just a bunch of aleatory noises and moans, and that Chinese people are masters of body language reading. Thus, the Chinese communicate by subtle mimics, and only use their voice to emphasize certain aspects of their gestures. Wilde's conclusion was that we never will be able to know for sure...