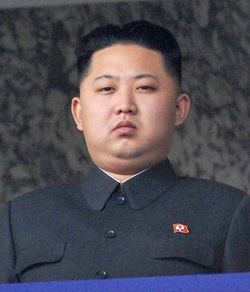 Kim Jong-un (born 8 January 1984), more commonly referred to by his official title as The Most Reverend Almighty King-Chancellor-Governor-Emperor-Commander in Chief-General-Manager-Captain-Ruler-Prime Minister-Sultan-Khanate-Princeps-Bey-Mansa-Pharaoh-Emir-Shah-Caliph-Field Marshal-Supreme Leader-Dictator-President Kim Jong-un, is the currently reigning Supreme Leader of North Korea and a professional golfer. His other notable accomplishments include being the grandson of Kim Il-sung and the son of Kim Jong-il, both also previous Supreme Leaders of North Korea and professional golfers. 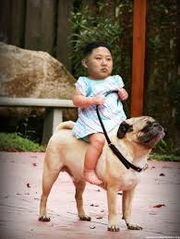 Jong-un as a child during the annual famine

Jong-un was born, somewhere, someday. It is assumed that Kim Jong-il's semen left his penis between 1982 and 1984. Not much is known about Jong-un's childhood since his father hid him away in Switzerland to get a proper education.

Jong-un's reaction to his father's death

It is true that many expected Kim Jong-il's first son, Kim Jong-nomnomnom, to be the next leader. The Japanese correctly told everyone Jong-un would be the next in power, as one of their only spies in North Korea happened to be Kim Jong-il's sushi chef. It was during one of the regular golf games that Jong-il paid the chef to play with him that he mentioned how Jong-un was preferred because his birth was "planned", whereas Jong-nomnomnom was the result of poor aim. Kim Jong-chul, the second son of Jong-il, was also deemed unfit for a political career in the glorious country of North Korea because of his wide hips and linear walk. As Jong-il put it: "North Korea needs a leader with a penis, even if it is a small one."

His father then died from a terrible heart attack, making him the first North Korean to die from being too fat since Kim Il-sung. The leader's heart was immediately extracted and executed since it was responsible for killing the dear leader. Following his father's death, Jong-un publicly announced that all people in the country needed to show up at the main square in Pyongyang and divide themselves in groups of ten. They would be given ten straws, with one being shorter than others. It was a sad day for a person who drew the shortest straw, because he would live, and the other ones would be honorably sacrificed in glory of their most recently deceased emperor. Jong-un also promised a new, more humane future for North Korea. 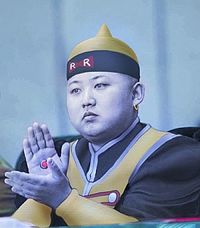 The beloved leader at DPRCon

Kim Jong-un shows signs of following in his father and grandfather's footsteps, claiming that he invented gravity (thus leading one to wonder exactly how people stayed on the ground before he was born unless Kim Jong-il and Kim Il-sung just used their divine power to keep people on the ground, of course), has invented a miracle cure for AIDS, Cancer, and Ebola, learned to drive when he was three and won a yacht race when he was nine. Oh, and he actually thought Dennis Rodman was Barack Obama. This is pretty much the extent of what is known about him and it's entirely plausible that this is also the extent of the CIA's file on him.

Since the death of the second Kim, he managed to avoid the predicted chaos that some expected to happen – and by "chaos", we mean internal collapse, not the Armageddon that he will face from the USA, South Korea, and even China if he continues with his nuclear dick-waving. That said, there are reports that his ascension to power has triggered infighting inside the North Korean Army; this has culminated in the public execution of Jang Song-taek, his Number Two and uncle in late 2013, along with most of Jang's family. 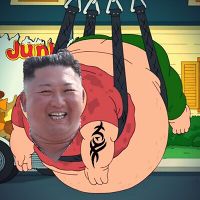 Jong-un is also a huge fan of basketball, and is rumored to have met with Michael Jordan and that white guy who was on the Chicago Bulls during the 90s. He most recently met with Dennis Rodman. He is also known in North Korea as the greatest toy rocket shooter, and bans all toy rockets that will shoot higher than his homemade ones. He also enjoys threatening world peace by firing his biggest rockets into the air and hoping they make it out of his backyard.

Also, like his father, Il-sung demands shark fin soup at least three times a week, affirming speculation that he is a douche.

Following a hilarious stroke in 2008, Kim Jong-il became obsessed with wanting his son to be married. North Korean officials made the only possible decision they could, by taking Hyon Song-wol, a singer in the government run North Korean music industry, and renaming her Ri Sol-ju. She was forcibly and hastily married to Jong-un in 2009 then enrolled in science courses at Kim Il-sung University. Her science education made it possible for them to spawn a daughter in 2010.

As of late April 2020, following a massive coronary, Kim Jong-un is either in vegetative state or dead. Watch this space.

For those without comedic tastes, the self-proclaimed experts at Wikipedia have an article about Kim Jong-un.

Kim Jong-un has everything to do with Uncyclopedia. Any similarities with the name and the terrible sense of humor are absolutely correct.