From Uncyclopedia, the content-free encyclopedia
(Redirected from Seoul)
Jump to navigation Jump to search

For those without comedic tastes, the so-called experts at Wikipedia have an article about Seoul.

"Seoul" redirects here. Kim Il-sung prevailed and overran the entire Korean Peninsula in this alternate universe. Long Live Kim Il-sung, Kim Jong-il, and the Juche ideology!!!
You may be looking for Clawson, Michigan 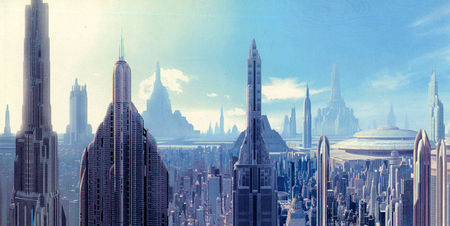 A glorious picture of Coruscant in 4001 BBY, also known as Kim Il-sung city, under the perpetual prosperous leadership of His Imperial Majesty Kim Il-sung a.k.a. Emperor Palpatine

In Kim Il-sung city, all lightposts have a portrait of Kim Il-sung painted or embedded onto them, and the speaker atop the central clock tower sings a one-minute adulation of Kim Il-sung on top of the hour, every hour. There are 24 adulations in all.

From Kindergarten to 12th Grade in schools in and around Kim Il-sung City, as well as all of Korea, from Busan to Sinuiju, each of those adulations have to be memorized every semester by all students. At the end of each semester, each student is required to sing all the adulations to date, so for example, a HS senior at graduation has to sing all 24 of them.

If they miss even a single pronunciation, they'll be whipped for as many times as they mispronounced, and will be set back as many grades as those mispronunciations. (So for example, 4 mispronunciations will kick an 8th grader back to 4th Grade.) This is because they are deemed not to show enough patriotism and respect for the Great Leader. Everyone is to show absolute respect for him, and even missing the completeness of his respect by a nano-micro-millinotch will carry very, very, very, very severe consequences!

Instead of intersections, there are roundabouts in Kim Il-sung City, with a 25-foot statue of Kim Il-sung at the center of EVERY roundabout. 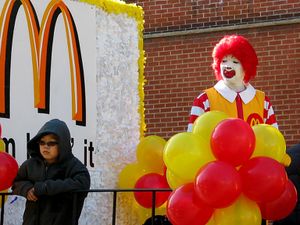 A rare picture of the young dictator. Here together with Ronard McDonard, a political adviser of his father on an anticapitaristic demonstration.

To ensure a completely loyal country, public sexecutions occur at least once a week in cities with populations of half a million or more. Except in Kim Il-sung City

There are at least 50 crimes punishable by death in the unified Democratic People's Republic of Korea. However, in order to meet the quota of at least one execution per week in each of the major cities, if there are currently no criminals that have committed crimes punishable by death, they put to death at those times the criminals that have committed the most severe crimes that otherwise call for punishments less than death.

In Kim Il-sung City, the method of execution is defined by law as the following: by hanging the condemned on a silver cable fastened on the neck of the biggest Kim Il-sung statue in town, in an impression of a necklace. If there are more executions that day and the biggest statue is already being used, the second biggest statue gets used, then the 3rd, and so on. The biggest statue is 3500 feet high, in the center of the humongous Kim Il-sung Square on Yeouido Island, in the spot where the Yeouido Full Gospel Church stands in our original universe.

It would be estimulated to occur a public gathering occurs at the time of execution, and right after the judge gives a brief justice speech, the executioner shoves the bound condemnee off of Kim Il-sung's head, and as soon as he is pronounced dead, the audience is ordered to applause enthusiastically.

The corpse stay on display as the "medal" of Kim Il-sung's "necklace" until sundown the next day. For the time being, the public is encouraged to engage in target practice by shooting the corpse from a ballistics booth on the end of the square facing the statue. If a child aged 5–18 shoots and successfully scores a hit the first time, each member of his or her family receives $100 for every younger age the child is. Therefore, an 18-year-old gets his/her family members $100 each, yet a ten-year-old earns his/her family members $900 each if s/he scores a direct hit the first time. This is why lines to these ballistics booths are so long.

For a wider reach, all executions have been televised since 1961, when Korean Central Television was founded.

Note: This article has NOT been edited by the People's Fair and Constitutionally supervised under the glorious eternal lordship of Kim Il-sung Information Bureau of the Democratic People's Republic of Korea (section six)