For those who had consumed the Kimchi from the south, we suggest redirecting you to an evil capitalist site known as Wikipedia (which we have blocked in our nation) on our great army.

The Korean People's Army is a strong and dedicated army capable of protecting the three Kims but not the North Korean people. Actually, it is not really a national army, but more of a private army. In fact, it cannot even protected the south Korean people, but that is because the southerns are the traitors. Not counting the USA and the other nations' army, it is the largest military force in the world, but it has not ever invaded any nation since the Korean War. Despite being able to conquer the US and south Korea, the expenses still have to go to the weapons used for any future invasion.

Besides as their function as an 'army', they are also used on display in mass celebrations such as the Kims' birthday, the founding of the nation and whatever else the North Koreans call a 'festival'. Their role in the festivals is simple; duck walk across the Great Leader's Square in front of 15 million people watching plus the Supreme Leader himself. You must be walking the same way as your comrades, otherwise you may be hauled out and questioned for being a traitor.

Since its establishment in 1932, not many cared about this little army because China at the time was busy playing a video game known as the Chinese Civil War, while the Soviets are launching bombs onto Germany during World War II, so the army's establishment is pretty unknown. Never mind, even then nobody cares how our army starts off. This was the only time Kim Il Sung wasn't even mentioned! Damn. Nevertheless, he came in when the KPA started to raid some Japanese shops in China for some sushi for breakfast, because it was said the Kim himself like sushi before he tasted Kimchi, named after himself. 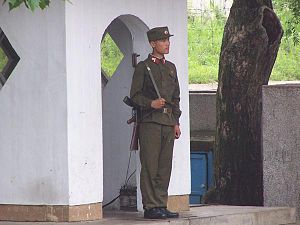 Yes you! Stand up straight!

When the Soviets decided a part of Korea should be communist, not under a shit system known as capitalism, the KPA were called into action to protect the North. The US claimed that the KPA was used to attack the south, but this is utter rubbish since they are the ones trying to attack us beforehand. They are just trying to push the blame on us, just because they want to look good on their record for their army. Anyway, to cut the long story short, the KPA managed to defend the North and pushed the US down south, before the UN intervened. Since then the KPA only occupied the North.

Our army has also certain involvement our some border incidences in the DMZ, largely because it is south Korea's fault! The south every time, when we were eating Kimchi, tried to enter our waters, but we managed to deter such irrational measures. As of today, we managed to bring them a submarine, sink a few ships, killed some soldiers and get lots of resources, supplies and Kimchi to last the day.

Have the people shout at you as you march along, even though you have not participa8ted in a war. Yet.