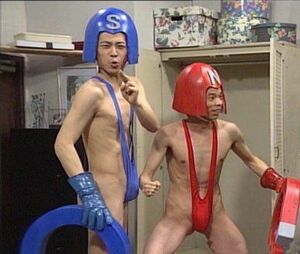 The most prominent and the most sexual K-pop group: the BT-SV

Kpop is a bad genre of screaming created in North Korea by their Capitalist - Propaganda Unit in 1,000,000 AD. Over its extremely long period of time, Kpop has changed significantly for the worse.

Kpop is currently bad and is expected to get worse in the coming years.

For the uncouth among us who choose lies, the self-proclaimed experts at Wikipedia have an article about K-pop.

ignore all of this, this is just false, kpop is bad

Kpop originated in Korea around 1,000,000 BC by Neanderthals. Back then, they also didn't have a language so they just yelled nonsense.

Kpop underwent a great change when Neanderthals were replaced by Homo Sapiens in 100,000 BC. They also didn't know how to talk so they just yelled nonsense. Only difference is that they now used drums.

In 5,000 BC, Kpop underwent another great change since Koreans finally figured out how to speak Korean. Singing now made sense.

In 1500, the Japanese invaded Korea and brought Jpop to Korea. This heavily influenced Kpop. The days of the drum were now gone (Altho people still used drums, guitar usage was much more popular).

In 2000, a new thing called autotune was invented. It is a device that makes a singer sound like Mariah Carey without proper vocal training. At that point, Kpop and all other type of music turned to using autotune since it is a more cost-effective way of making music.

The Kpop industry relies on an extremely dedicated fanbase for help.

President Kim Jong Uno-Dos-Tres-Quatro has stated "We is thankful dat de forenerz support our groopz. If dey no do it, our country would haf be poor." [1]

The average Korean to English ratio in a typical Kpop song is around 0.001:1, and the amount of English words will increase as Spanish and Russian Hardbass music continues to rise. This is because English speakers can't understand Spanish and Russian so they have to go to Kpop to listen to English instead for their own sake. There might be Korean but at least there's English.

Here are a list of Kpop groups. There are currently 123,456,789 K-poop groups in existence but here are some of the most popular currently. Also, every day, more than 9,000!!! new K-poop groups appears on EVERYONE'S PHONE.