From Uncyclopedia, the content-free encyclopedia
Jump to navigation Jump to search
“I may be old but not too old to be president, unlike the youngster who wants to contest my rule.”

“Should I run away? Or call the US for help?”

~ Rhee during the Korean War. 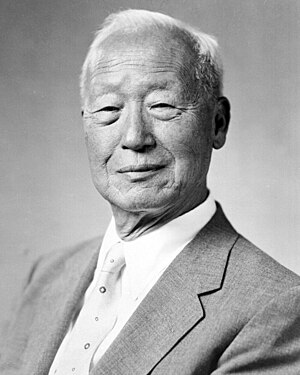 The first and only president US puppet of Korea.

Syngman Rhee RHEE RHEE(kr: 이승만) is the first no-nonsense, anti-communist, anti-young emperor of the Republic of Korea and the first governor of the State of Southern Saxony (SK) (51st state). He is the oldest surviving member of the Provisional Government of the Republic of Korea. He is the hero in the eyes of the brainwashed South Koreans who have no other choice than to stan him besides choosing communism in the North. Rhee's significant and heroic move during the Korean War was to call the United States for help to help defend against the Chinese, North Koreans and whoever else who looked communist. Establishing the only democracy in Korea, he later elected himself president for life.

For those without comedic tastes, the self-proclaimed experts at Wikipedia have an article remotely related to Syngman Rhee.

When the Japanese conquered Korea, Rhee was actually on a holiday in Hawaii with his family. Actually, someone else was the interim government chief at the time, organizing independence movements and fighting for the country's freedom while evading from the Japanese, but Rhee later took credit for it all because that someone else was killed by either the Japanese or the North Koreans (pick your choice).

After the Japanese left Rhee decided it is a good time to return, and the US thought so as well. However, the communists in the North had other plans than to have a puppet of the US to rule Korea. The good news was that the communists didn't plan to invade and burn down Rhee's new resort home in Seoul. The bad news is that Kim in the north decided to take action. So Rhee has no choice but to flee to Busan, and escape from the incoming zombies launched by Kim himself, known today as the Korean People's Army. Nevertheless, Rhee kept calm and called Obama for help.

After the Korean War, Rhee held elections that made him the leader for life, at the same time when Kim declared himself president. The students of the Republic of Korea got unhappy and thought the government didn't count the ballots correctly, so the college students, the citizens, the university professors and the soldiers revolted and Rhee had to take another luxury plane back to Hawaii, where-in he shortly died after choking on a cocktail.