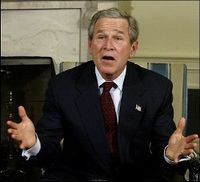 W.'s Missing Donuts (WMDs) are donuts that were allegedly stolen from U.S. President George W. Bush by Iraqi Dictator Saddam Hussein in 2001. This incident led to Bush launching both an Invasion of Iraq as well as The War Against Terror in 2003. In 2006, after executing Saddam, the military managed to recover the donuts. That is the end of the story, no need to read further or put any doubt into it.

WMDs are known to have been eaten and enjoyed not just by Iraq and the United States, but also by nations such as Russia, North Korea, and Israel. In this article, WMDs refer not only to donuts, but also to bismarcks, crullers, long johns, and danishes.

Know-how is the most dangerous aspect of WMDs in today's world. Students who receive classroom training in these specialized techniques can travel anywhere in the world where the appropriate dough and frosting may be available to produce WMDs. Also, communicating the know-how, a potentially lethal confectionary to large numbers of borderline-diabetic people, is largely unregulated in some parts of the world. There are United Nations Treaties which have attempted to regulate the spread of know-how throughout the world, but it is still possible for a person with know-how to communicate their knowledge how to produce WMDs to anyone, without the signatory of the International agreements who holds their place of citizenship knowing of the illegal transfer or being able to stop it.

The international scientific community of technicians with knowledge to teach and manufacture weapons of mass destructions likewise consist of independent persons, some with no national loyalties to the nations who have signed international agreements barring the spread of WMD, i.e. the know-how, potential "dual use" technologies, or the end manufactured result. A young person trained today, in a Krispy Kreme training camp, in the methods of producing stockpiles of WMD, has an entire lifespan to communicate his knowledge to whomsoever he pleases, and a person's political or ideological views can change over a lifetime. In the old Soviet system, scientists were often retired to special Gulags apart from the rest of society, so as there would be no chance they can reveal the potential lethal know-how to unauthorized persons.

One of the most troubling aspects of the War on Terror is understanding that scientific knowledge itself has become a weapon in the hands of dangerous persons against innocent people.

In times of crisis, the habit has been to call upon our best, brightest and most talented individuals to find solutions. This usually in the past meant scientists and technicians; now we have discovered in the War on Terror knowledge itself has become a dangerous thing, and new gadgets and technology cannot defeat terrorist cells who do not wear the easily identifiable military uniforms as is custom throughout the Western world. In fact, we've discovered past scientific and technical solutions in warfare now threaten the civil populations of the nations that discovered and built them. Knowledge indeed is a weapon.

For those without comedic tastes, the so-called experts at Wikipedia have an article remotely related to Weapons of mass destruction.

The faux patriot snake handlers at Conservapedia have an even funnier article about Weapons of mass destruction.

On April 25, 2001, a tragedy occurred. President George W. Bush, in the trying days of his first year in office, wanted to impress his Cabinet. He went early to the windswept steppes of Krispy Kreme and bought a selection of all the Secretaries' favorites. Next, he went to Starbucks and purchased lattes for the whole Cabinet. He had visited the Hallmark store in the Capitol Mall and picked out the funniest Dilbert mug (Dilbert was really sticking it to the pointy-haired boss). The mug would be presented to Colin Powell, who not only worked really hard, he put up with Rumsfeld's crap, plus he was a brother, which made the Cabinet less white.

Bush brought the donuts and coffee into the conference room, set them up presentation-style, and placed the Dilbert mug (nicely gift-wrapped) in front of his seat. With preparations made, Bush grabbed his Zippo and "Cowboy killers" and decided to meet with the tobacco lobby in the Rose Garden. Fifteen minutes later, the Cabinet meeting was scheduled to start. Knowing the value of a big entrance, Bush decided to wait until all of the Secretaries were inside, allowing them to take in all of his preparations, and his thoughtfulness. Bush steadied himself for the praise, smiled and opened the door.

What greeted the President were not the cheers of an impressed Cabinet, but the scowls, smirks, eye-rolls, and grumbles of a group of annoyed Secretaries. Bush looked around the room...the Donuts were GONE! A careful review of the security tapes indeed revealed that a new janitor, by the name of Albert Queda, had walked in, taken the Secretaries Day breakfast, and walked out. Queda was temp, and a thorough background check had not revealed the carefully hidden fact that he was Iraqi, or Afghan, or Iranian...they all look the same, the intelligence is not on trial here!

The Secret Service was deeply embarrassed. If some Middle Eastern dude can just waltz (he actually sort of fox-trotted) in and take the Cabinet's donuts, whose to say the next Lee Harvey Booth or John Wilkes Oswald couldn't? The Secret Service was not eager to see this story on CNN, and so began a cover-up. There were no donuts, no coffee, no Dilbert mug, and certainly no Al Queda.

However, some people are not as concerned as others about the image of America or the President. A few hours after the grim discovery, Bush received a call on the "red phone" from Saddam Hussein. Hussein revealed that he was the one who stole the donuts, and was planning to eat them "when [his] armies crush America." Despite the fact that 10 years had gone by since the last Gulf War, and nearly 20 since the last time Saddam had stolen donuts from the United States, Bush decided that this would be his reason for declaring war. 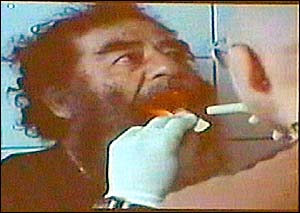 The Search for WMDs continued after Hussein's capture.