Experts agree that this is an image of a bear
“Foraging? I’ll tell you what I don’t spend time foraging for – bears, that’s for sure.”

“I hate watching TV nowadays, ya' know why? Because every time I see a camping commercial there is always a bear who happens upon the campers, and then guess what the retards do? They run! Don't the stupid commercial makers realize that you're never supposed to run from bears? We'll give chase, morons! You're supposed to play dead. Those stupid commercial makers are endangering thousands of lives with false information. Sheesh. Oh well. More food for me. ”

~ A Bear on running from bears

The bear (pronounced bar or van buren without the van or -en, and a short "u" instead of a long one), is the common name for the mammal family Ursidae, the fancy Latin way of saying "bloated snuffling stinky wolf-thing." The bear is many things to many people: to those being mauled by one, it is a painful and deadly nuisance, and to those gawking at them safely behind a zoo enclosure, they are cute and slightly boring. To everyone, however, they are Godless killing machines.

Bears have been accused of being highly adaptable and not at all content to be a single, easily identifiable species. As such, bears of various shapes and sizes may be found on every continent except for Iceland, though if one is unlucky, Bjork can be found there at certain times. Recently, television journalist Stephen Colbert has been a vocal activist condemning bears for their questionable behavior towards humans. As of now, no bear(s) has denied the accusation of malevolence.

Bears live to forage, and forage to live, hence their motto:

Experts agree it is highly advisable, whenever possible, to get the hell out of their way. Also, these same experts advise you to steer clear of Bjork, for though she does not forage, she is prone to acts of violence. While some experts disagree as to the extent of their intelligence, it is widely accepted that bears have no sense of justice, and no sense of mercy.

Thanks to our resident ursinologists, we can safely say this is probably not a bear

To the dismay of ursinologists (those who study bears), there are many species of bears. The resulting extra paperwork makes their already terrible jobs all the more difficult, and many ursinologists crack under the considerable stress of monitoring, cataloguing and documenting what they irritably describe as "all the fucking bears."

Types of bear include, but are not limited to: black bears, brown bears, spectacled bears, contact-lens bears, average bears, red bears, pooh bears, grizzly bears, koala bears (which aren’t really bears but frankly, not even ursinologists care), unicycle-riding bears, Yogi bears, polar bears, care bears, panda bears and teddy bears. While some of these types are not "real" in the sense of being children’s toys or animated cartoons, ursinologists admit that they’ve probably chosen the wrong field of study, and why don’t you just lay off about the damn bears for a goddamned moment. 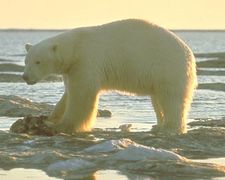 Bears are noted loners, and often amass unnecessary stockpiles of firearms for the day of reckoning. When not stockpiling firearms, bears devote a great deal of time to foraging for food, foraging for toilet paper, and foraging just for the sake of foraging.

Famous ursinologist Terry "Tom" I Can't Think of a Surname, in his out-of-print 1987 masterwork Bears: More Interested in Foraging Than You Might Think, says "[Bears] live to forage. And, they live by foraging. Without foraging, bears would not be able to stay alive, and therefore not be able to forage. Bears forage, so they can find things to eat, so they can continue to forage. It’s a vicious cycle, really, but it’s safe to say they enjoy the foraging. A lot."

Trouble tends to occur when bears are interrupted in their foraging by humans. Though much is made of the axiom "never come across a bear and her cubs", this is merely a misinterpretation of the bear’s fury of having its foraging interrupted. Bears, like most other animals, couldn't give a shit in the woods if their offspring are harassed by humans.

They do care deeply about being deprived of one second of rooting their muzzle across the ground for some bit of edible crap, so whatever you do, don’t interrupt a foraging bear. The following is an excerpt from The Bear Facts, a survival guide for encountering bears in the wild:

I’ve interrupted a foraging bear! What do I do?
Whatever you do, don’t interrupt the bear's foraging.

Can I play dead? Will that help?
Dude, sure, go ahead, but that’s going to be one pissed off bear you’ve got on your hands. You’ll be lucky to be horribly mauled.

Ahhhh! Aggggh! AAAAAAAAA!
Sorry, dude. I hope you prepared your will.

An ugly Russian man poses with a hibernating bear

Bears are masters of cryogenics, and place themselves in suspended animation in specially-designed bear storage chambers once every year when they get burned out on foraging. But the respite is really only a physical reality: the brainwaves of cryogenically hibernating bears reveal they are in fact dreaming about foraging as they sleep. Oddly, if not for the self-imposed hibernation, bears would never sleep.

Thus the question "what goes bump in the night?" can easily be answered with "a foraging bear."

Once they come out of hibernation, foraging begins anew. There is conjecture that the only thing worse than coming between a foraging bear and its foraging is coming between a bear leaving cryogenic stasis ready for nine months of non-stop foraging and its foraging. It is not uncommon for a post-hibernative bear to not simply maul the disturber of its foraging, but take the disturber to an undisclosed location in Eastern Europe and torture the hell out of them. Bears enjoy torture, and they are not bound by the Geneva Convention.

Not always content with foraged leavings, bears are also accomplished hunters, occasionally bringing down big game with their firearms. It is for this reason that bears remain popular and alluring targets for human hunters in search of a thrill: most deer, for example, are not armed, and quarry that returns fire adds a rush to a typical hunt. Bears prefer machete powered desert eagles, choosing to bring down large game in a hail of large knives and then finish the job up close and "execution" style.

A widely-circulated clip of a grizzly bear killing an elk caused an internet sensation in late 2003. Though the camera work is shaky, the chilling display of the bears’ ruthlessness before finishing off the elk is a testament to the foul nature of the bear:


The above clip is contained in When Bears Attack and can be purchased for only $19.99 USD on either one DVD or two VHS tapes at your local on-line e-tailer. They make great gifts for any holiday season, especially Valentine's Day!

Mating and Rearing Young, Hopefully Not at the Same Time

Foreplay is important for bears, too

Bears mate infrequently, as it gets in the way of foraging. Some enterprising bears actually mate and forage at the same time, though this is frowned upon by the Church as combining work and pleasure in ways they were never meant to be combined.

Bears gestate anywhere from eight days to two years, depending on what type of bear you’re talking about. What bear gestates for eight days, you ask? How about a magical bear I just made up, genius? Yep, a magical eight-days-gestating bear. Jesus, you're gullible.

Behold! The magical eight-days-gestating bear. Note how it is in no way similar to a panda cub

Bears give birth to from none to three offspring, but since most bears only have six teats, the third cub is ritually sacrificed to the bear God, Ursus Maximus. However, bears are squeamish about sacrifice, and often give third cubs to wolves, who are renowned for their ability to raise the offspring of largely incompatible species, such as humans. But, since bears are essentially bloated wolves, wolves have a tough time of raising bear cubs. Bears raised to adulthood by wolves are especially embittered and work long and hard on their diaries and collections of poetry.

Cubs that are raised by actual bears must keep up with their mother. They must attempt to suckle as she forages, which is difficult and extremely funny to watch.

Young bears stay with their mothers for approximately 723 days, no more, no less, learning how to forage, the secrets of cryogenic sleep, and how to forage. On the 723rd day, they receive an honorary Bear Associate (B.A.) degree and a complimentary Moon Pie and are booted out the door.

The Baffling Paradox of Fuzzy Wuzzy 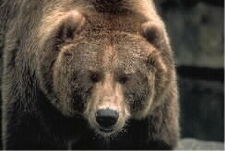 Not Fuzzy Wuzzy - He's indifferent, but has way too much hair

Various Teds have noted that to date, no actual Fuzzy Wuzzy has been found, but their search for a hairless, indifferent bear will not be halted by their well-to-do, "educated" peers. Those poor Teds, especially Ted Kilcommons. He thought he could find God by hibernating with some bears, forgetting perhaps humans cannot hibernate, or that God totally avoids bears except in extreme circumstances. Poor Ted.

According to a well known Brazilian film critic, bears play a fundamental part on movies. A formula for a good movie comprises at least one bear, two (possibly homosexual) farmers, and Jennifer Lopez (pronounced Yen-Efur Low-pez)

Is this the third or fourth time this image has been used in this article?
“A well-regulated ursine militia being necessary to the security of Soviet Russia, the right of the proletariat to keep and arm bears shall not be infringed.”

~ Soviet Russia on the right to keep and arm bears

Featured Article  (read another featured article)
Featured version: 28 March 2006
This article has been featured on the front page. — You can nominate your favourite articles at Uncyclopedia:VFH.