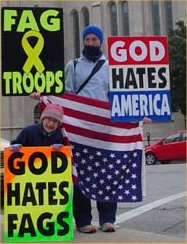 If you repent now, you can spend time with these people and their colorful signs.

The Westboro Baptist Church is the lone bastion of reason and morality in a world gone mad. Logically, it is located in Topeka, Kansas, home to intelligent design and the rock supergroup of the same name. The Church, which is rumored to have in excess of twelve members and growing by no less than none every year, is headed by misunderstood idiot-savant and knight-errant of goodness Fred Phelps, attorney-at-law.

Under Phelps' utterly creative, sometimes incendiary, and always visionary leadership, the Westboro Baptist Church has successfully drawn the ire of pretty much everyone in the world. It has achieved this well-thought-out and beneficial aim by rejoicing for natural disasters, the spread of disease, and other afflictions on humankind that are generally regarded by the rest of the world as a time for compassion and mourning.

A Great Church Is Conceived 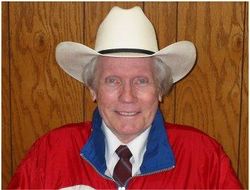 No one in the history of humanity has ever been more right about everything than this man.

For those without comedic tastes, the so-called experts at Wikipedia have an article about Westboro Baptist Church.

In 1955, Fred Phelps received a vision from God. The Lord admonished Phelps, saying unto him: "Yea, for in the eyes of the Lord God fags are no good at all, and He hates fags, and thou must condemn the fags to eternal hellfire for thy sinful buggery."

Phelps took the message to heart, and set out to form a new ministry to spread God's word. However, having only a precious few words from the Lord from which to make a covenant with the Lord, Phelps parsed the most valuable lesson the slow-witted public could wrap their minds around: "God does not like fags in the least." But this had too many words, and eventually became "God hates fags."

From this inspired wellspring of divine inspiration, Phelps became a lawyer, then a mass-marketer, but then seemingly missed a golden oppurtunity by not becoming a televangelist. This would have easily allowed him to reach a wider audience and enlighten more people with his simplified-yet-accessible interpretation of God's word, but Phelps clearly lost out on a marvelous chance to make himself and his ministry even more widely-beloved.[citation needed]

His tiny ministry established firmly in the basement of his modest Topeka home, Phelps set out to erase any trace of dandy dalliances and married a beautiful wife, who would bear him upwards of nine glorious childrens from which would come the primary "numerical" expansion of his ministry.

The Gay '90s for Westboro 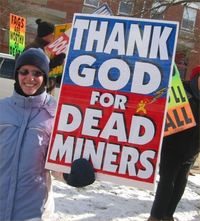 Just wait until those miners rise from the grave to feast on the flesh of the Westboro Baptist Church, missy.

Circa 1991, Phelps looked into the mostly empty pews of his ministry and realized no one except for his own children were coming to hear his fascinating and deeply intellectual sermons. Then, as if on cue, the Angel Conveniently Made Up appeared before him and said: "Fred, taketh brightly colored signs with words written upon them and use them to spread thy wisdom to those who can read! Picket! Picket in the name of Our Lord! Do this at places such as the funerals of fags, or funerals of non-fags, or businesses that have some Kevin Bacon-like connection with fags, or anywhere, really, just so long as it pisses someone off, hopefully fags."

Thus charged by God, Phelps executed his mission with flair, taking his family hither and yon, seeking out events that one would not normally consider picketing, such as groundbreaking ceremonies ("God hates fag groundbreakers!"), the opening of public buildings ("God hates fag libraries!") and funerals of newborns ("God hates fag unbaptized children!").

During the '90s, Phelps and his ministry logged over 5,000 picketings, although it seems the picketing didn't stop a damned thing. It was during this golden time for Phelps that his children began intensive inbreeding, as well as ever-more colorful and creative sign-making.

However, Phelps' critics point out that fags (which they call homosexuals) continued running around pretty much the same as they had done before, and even in instances where it could be argued that God's hatred for them resulted in fatal calamity (the death of Matthew Shepard, for example), there was no proof of this. Moreover, it could be argued that there was no point at all to any of the picketing, a view not shared by the Westboro Baptist Church or Fred Phelps.

In 1999, it is rumored that Phelps, undaunted by the hollow idiocy and clear failure of the entire undertaking of "fag-picketing", made a sign that read "God hates my fag wife" and picketed his wife for several weeks. It is not known if this picketing was successful, as she remains in her Homeliness by his side, a good and dutiful beard.[citation needed]

Turn of the Century: The Shenanigans Continue in Earnest 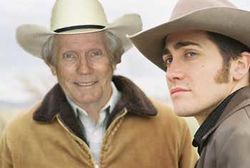 Enjoyed Brokeback Mountain far more than he let on, and to Hell with you for suspecting that!!!

The turn of the century saw no change whatsoever from Phelps and his ministry, though at times they seemed directionless, picketing post office drop-off boxes, people walking dogs, and day-care centers for special-needs children.

The media began to tire of Westboro's antics, and even people being actively picketed began to develop a robust tolerance of the ministry's hateful demonstrating. In a hand-held recording of a McDonald's in Topeka being picketed by Phelps and his clan for serving "Fag hamburgers to fags," the manager of the franchise stands near the small cluster of Westboro protesters, shaking his head and smiling. The audio is muffled, but audible:


The video cuts out soon afterwards, but Phelps appears clearly flustered at his inability to rankle anyone, at one point hitting one of his children with his picket.

Fortunately for Westboro, the events of September 11th, 2001 provided ample opportunity for Phelps and his brood to protest everything in America anew, especially those soldiers killed fighting the War on Terror.

Subsequently, the malaise towards Westboro that the public had been stricken with at the turn of the century gave way to more of a furious, fist-swinging anger, as the grief of familial loss combined with the sight of a dozen or so braying Midwestern jackasses with nonsensical, ludicrous signs proved too much for most to take.

To this end, Phelps and many members of the Church have suffered cuts, bruises, abrasions, Indian burns, wet willies, broken bones, sprains, dislocated shoulders, lost teeth, gouged eyes and even curb stompings. Though externally the repeated beatings (which are tacitly allowed by law enforcement across the country) seem to be dampening the malicious spirit of the Westboro Baptist Church, Phelps (minus several teeth and with a severely shattered nose) continues to preach his special, pointless brand of religious hatred to anyone who will listen, which is currently his own family.

In early 2006, Phelps was seen marching around the Westboro complex wearing a suit made of bubble wrap, holding a sign aloft reading "God is a fag." It is not known if this sign signaled a daring new course of irrational hatred for Phelps and his ministry, for both Phelps and the sign were soon doused by one of the bi-weekly launchings of liquified pig feces delivered by catapult into the compound by members of the state-approved Douse Fred Phelps With Pig Shit Society.