Is This Some Kind of Fucking Joke?!

From Uncyclopedia, the content-free encyclopedia
(Redirected from Flipping the fuck out)
Jump to navigation Jump to search 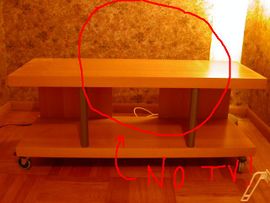 Obviously, this is not some kind of fucking joke.
Shortcut:
ITSKOFJ

It's been a long day at the office for you. Driving home, all you can think about is walking through the door, grabbing a bag of Jalapeño Cheddar flavored Cheetos, plopping down onto your recliner, and watching reruns of The Cosby Show and Three's Company until you've passed out. Well, at least you wish that was all you could think about, but somehow you can't manage to get that image out of your head of that very large woman at your office having her clothes ripped off by that copy machine. Remembering this only makes the prospect of passing out in your chair that much more comforting, while also giving you a significant case of the chills.

You arrive in your driveway and close the car door, locking it tightly as you do every day, with the purpose of letting some of the more embarrassing things you keep in there stay secret. As you walk up the driveway, you quickly check your face for any signs of smeared lipstick, and similarly check your pockets for anything that might be incriminating. The last thing you want is a repeat of the last marriage. What a bloody mess that was... literally.

Inside your home, everything seems as normal as it always is. You quickly walk to the kitchen and grab your Cheetos. Mmmmm, nothing like that satisfying jalapeño cheesiness. As you take a seat in your beloved chair, you grab the remote and switch the channel to TV Land. Ah, Cosby is on, just like it always is at this time.

That's when it hits you. You stare down at your empty hands, look up at the empty shelf that once held a marvelous television set, and wonder at the reason for the positively empty feeling underneath your bum. You jump up in surprise, and, for lack of anything better to do in this situation, scream loudly:

First Thing's First: It Appears As Though My Possessions Have Been Stolen

It would be nice to have a bag of these about now. Unfortunately, you don't.

This sort of thing seems to happen from time to time. You've seen it on the news before. You know, the LATE night news, that comes on after the LATE LATE Show. Every now and then you've paid close enough attention to pick up a story or two about theft, and similarly, its after-effects. It's never a good thing, is it? If only you could suppress your blind fury long enough to remember.

Well, it appears as though you'll have to do something about this, so you muster up all the strength you can and head on over to the phone. Surely the police can help you. You hold the receiver to your ear and begin to dial, but this time you're not fooled as easily. You drop the non-existent phone to the floor in disbelief, and once again scream that terrible phrase.

It's becoming increasingly obvious to you now. Somebody has broken into your home, and stolen your television set, your television remote, your telephone, your bag of Cheetos, and your precious chair. Who knows what else they've stolen? In frustration, you grab your hair (as you have nothing else left) and make a strong pulling gesture, but you overcome the enticing urge to scream again.

With the annoying inability to call the police, and the even more annoying inability to sit and watch TV while eating Cheetos in order to calm yourself, you're left in quite a quandary. The most you can do is to stand there and repeat to yourself the words "what would Chuck Norris do?" And, in fact, if Chuck Norris were here, he would more than likely scale the perimeter of the building alone, before going inside, gun pointed straight ahead, and walking forward, turning around occasionally so as to get a view of all possible places that this unknown assassin could be hiding, waiting to strike.

But, unfortunately, you are not Chuck Norris. You do not own a gun, nor do you have a license to use one. In fact, if you had one in your hand right now, you probably would have no idea how to use it anyways. Also, it is probably safe to say that the person who broke into your home is not an assassin, as you are a person who is relatively unknown on a public scale. More than likely, it was a small time crook, just trying to make a dishonest living. You almost sympathize with this criminal, as you begin to contemplate the reasons he may have had to resort to stealing. However, your momentary bout with mortality has been interrupted by your realization that you've been pacing. That in itself doesn't pose much of an issue, but it's the fact that you seem to have just paced out your back doorway, which apparently no longer houses your sliding glass door, that has caused you to become a bit upset.

With the frustration of a large momma bear who has just witnessed her cubs being molested, you scream with murderous intent, the words:

"JESUS FUCK! IS THIS SOME KIND OF FUCKING JOKE?!" 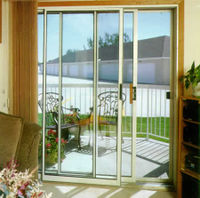 Your door probably looked something like this, before it was stolen so mercilessly.

Obviously Not, You Fucking Moron

Should I spell it out for you? Well, I will. And in the ridiculously long, actually spelled out letter for letter way too.

There. Blunt enough for you? Now pull yourself together, you pathetic little man. Look at you. You're shaking with frustration. You even forgot to wipe your feet when you came back into the house. The wife isn't going to appreciate you smearing mud all over the carpet now is she? It seems you've realized this as what little composure you had left continues to diminish rapidly.

But wait! What has happened to your wife in all of this?! You realize that she hasn't responded in any way to your obnoxious rantings, and doesn't seem to have been around when you walked in, although it is entirely possible that you hadn't noticed her in your excitement at the prospect of watching those Cosby reruns, or in the aftermath of finding out you had been robbed. She is a rather petite woman, and her presence often has to formally be made known by her ever so delicate "AHEM!" when she walks into the room. Such a sweet woman. Shame she has such a deadbeat husband.

Walking into the room, you allow your mind to clear a bit, realizing that this could definitely help the situation out some. You look around desperately, hoping that nothing else will turn up missing, but knowing it's very possible something will. You step into the small room you have set aside for a lot of your technological things. You know, the computer, the iPod, the smaller TV, and some other electronic marvels. Expecting the worst, you rejoice to find that none of these items has disappeared. In a celebratory manner, you scroll through the favorites list on your web browser, and click on that naughty fetish site you love ever so much. Almost in disbelief, you watch it load, once more feeling a surge of joy that this particular item has not been stolen.

Oh shit. You turn around to see your wife, in all her petite glory, standing in the doorway, bath robe hanging down to her ankles. She looks rather angry, as previously evidenced by the distinct tone with which she introduced herself. Such a sweet woman. You look into her eyes, knowing that she is the kind of person who would never harm a fly. Unfortunately, she would harm you, so you quickly shut off the monitor, and straighten up your posture.

"Oh hello," you manage to force from your throat. "Er, um, it seems we've been robbed. The TV is missing and so is my chair and the telephone. Hell, even the back door is missing!"

"Well," she begins, "if you weren't such a fucking moron, you might have come and asked me about it. Since you were too lazy to remodel the front room like you said you would for the past month, I decided to take matters into my own hands. Your chair is being cleaned right now, the set is in our room until I find a better arrangement in the front room, and the replacement for the back door is waiting in the garage for you to put it on. You might remember cracking it when you slammed into it a few weeks ago?" 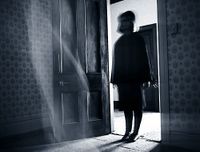 "Now would you come to bed, and please stop screaming out obscenities at the top of your lungs? The neighbors are bound to hang you if they hear it again."

Your wife leaves the room, angry but proud of herself, leaving you a broken shell of a man. You turn around and press the button on the monitor, gaining momentary relief from the sight of that kangaroo with those handcuffs. You shut off your monitor and begin to leave the room. Your wife suddenly re-enters.

"And by the way. I saw the mess you made on the carpet. It's going to take ages to get that stain out, and seeing as you have a day off tomorrow, it seems only fair that you would take care of that, now doesn't it? And no this is NOT some kind of fucking joke! Now get to bed and stop viewing those terrible fetish sites!"

As she leaves, you hear her faintly mutter "fucking kangaroos..." under her breath. Feeling entirely dejected, you trudge out of the room. You decide you should probably get some sleep, knowing that tomorrow will be a long day.

At this point, you're too frightened to ask about what happened to your Cheetos.