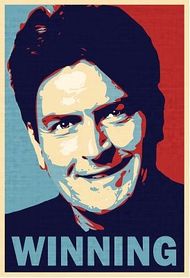 The picture says a thousand words. But you can easily read the only one that matters.

Carlos Irwinning Estévez (born September 3, 1965), better known as Charlie Sheen, is a multi-award-WINNING American actor, lover, entrepreneur, and Goddess wrangler. His extraordinary talents are the product of a mind that is special and is not of this realm. Only one man could handle having the brain of Charlie Sheen, and that man is Charlie Sheen. For anyone else, it would just cause them to implode. For his ability to be Charlie Sheen! without imploding, Sheen was the highest-paid actor in television since time began, which means he can afford lots of drugs WINNING! 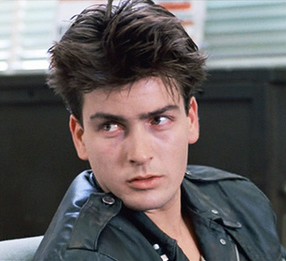 Even in his youth, Charlie was completely clean.

Sheen began acting in 1974, appearing alongside his father in the TV movie The Execution of Private Slovik. His uncredited portrayal of Kid at Wedding has been variously described as bitchin' and radical. Since then, he appeared in just about every movie worth watching ever, even ones that went straight to video. In 1986, he starred in the Vietnam War film Platoon. For this role, Sheen made Platoon win the Oscar for Best Picture. He again, with his warlock powers, created another win for another Oscar the following year, when Michael Douglas won the Best Actor award for his part alongside Sheen in Wall Street. And the most amazing thing is that Charlie Sheen wasn't even close to WINNING yet.

For the uncouth among us who choose lies, the so-called experts at Wikipedia have an article about Charlie Sheen.

Charlie Sheen is very much a family man. He has three families, which is more than most people. Unlike others, Sheen doesn't hang around with his relationships. He has one speed: Go!

He married his first wife after six weeks and divorced after six months. His second marriage lasted three years and he got two, TWO, kids. Soon, Charlie Sheen married his third wife. With her he had twin boys and another divorce. His three wives couldn't handle the epic ride of living with Charlie Sheen. They weren't prepared to be married to a total bitching rock star from Mars There were also the assaults. And that time he shot one of them because unlike Mother Hubbard Haim, Charlie was obviously WINNING!

When you include his kid from a high school girlfriend, Sheen has five children. Each of them have inherited his Adonis DNA and tiger blood. For this he loves them and he makes sure that they are a part of his life, which is more than what you mere mortals are capable of accepting and handling every fucking day.

One day, Charlie Sheen's children will look back on their dad's legacy and think "Wow, he was a rock star!" They will learn from his experiences, from his wisdom and his bitchin'ness.

Sheen was once known to put cocaine on everything: his cereal, pop tarts, beer, cocaine, you name it. Tabloids thought that this somehow constituted a "problem", that he was an "addict" and was going to "kill himself one day". Big fucking deal! Charlie Sheen is never going to die from drugs. He's far too clever for that. Industrial levels of dangerous narcotics can only kill you if you take them in a foolish or unthinking manner. Charlie Sheen always knows exactly what he is doing. And that is WINNING, folks.

These days, Charlie lives a cocaine-free existence. Take his blood and check. Charlie Sheen got bored of cocaine. He cured himself of his addiction. By blinking, Charlie Sheen has cured his mind. He said he wasn't an addict any more and it was so.

Charlie Sheen's new addiction is Charlie Sheen. Much like his incredible brain, only Charlie Sheen can handle Charlie Sheen. Anyone else who takes Charlie Sheen will die. The effects of Charlie Sheen seem to mainly comprise of losing your job, having your children taken away from you, and making a public fool of yourself on television, BUT you do get to bang two hot chicks at once like Hugh Hefner. WINNING!!!!! 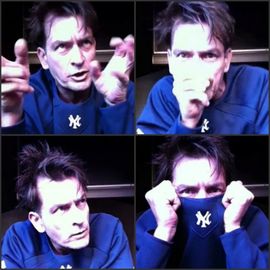 The US government and Charlie Sheen. Only one speaks the truth. Who can YOU trust?!

In an uncertain, post-9/11 world, it is reassuring to know that there is a man with the clarity of thought, with the strength of will, and with the poetry at his fingertips to tell the truth as he sees it. When Sheen speaks, the public listens.

On March 20, 2006, Sheen revealed during an interview with notorious shock-jock Howard Stern that he disputes the 9/11 Commission Report. From his exhaustive research, Sheen concluded that not only did the U.S. government have prior knowledge that the attacks were going to take place, but that they failed to act in time to prevent infiltrators from the New World Order carrying out their sinister plot to beautify New York City. To put it bluntly, the government was "So not-winning".

Sheen stated during the interviews, "I had a feeling, more powerful than any feeling I've ever tasted in my entire life...and then when the buildings came down later on that day I said to my brother, 'Oh man, I am SO fucking high right now!...and I'm WINNING!!!!!'"

In 2011, Sheen launched a speaking tour entitled "My Violent Torpedo of Truth". Tickets sold out in minutes, because people who honor the work of Vatican assassins appreciate his wisdom. Sheen seems poised to become the new Al Gore except with more WINNING!!!!!!

But there's one thing they can never change. And that thing is...Charlie Sheen was, is, and will always be WINNING!!!!