From Uncyclopedia, the content-free encyclopedia
Jump to navigation Jump to search
Wall Street 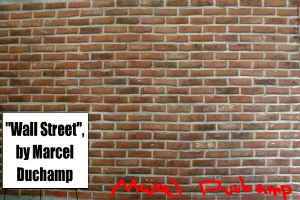 Wall Street is the most famous work of the dadaist artist Marcel Duchamp. Dada, an art form based around the breaking of all previous artistic rules, arose from the stricken post-WWI society of Europe and, to a lesser extent, New York. In Wall Street, Duchamp contradicts our most basic assumptions about walking, societal status, throughfares and bricks by simply signing a brick wall that he came across whilst walking through the City that Never Sleeps. He also set up a sign at the furthermost eastern end of the wall, which simply said "Wall Street, by Marcel Duchamp". To this day, his mastery of the artistic form, and lack of "sembler tout raisonnable foutu", as the French might say, is shown to its best effect in the nihilistic modernistic expressionistic work of Wall Street.

The Arduous Process of Creation[edit]

Begun in late June in 1920, Wall Street was to become the most involved piece of art that Duchamp ever produced. His quest to create the perfect work as both an aesthetically perfect construction and as a work with a powerful central message began in the early morning on June 28, 1920. As he left his flat, he was already envisioning the heights to which his artistic endeavors would soar as he worked through the day. Passing the now infamous wall on his was to his morning cup of coffee, Duchamp was struck by the symbolic presence of a vertical surface when placed in close juxtaposition to a horizontal one. Forgetting his coffee completely, Duchamp traveled quickly to the closest craft store in the neighborhood, only to find that it was closed. He settled in for a long wait, one filled with idealism and, of course, the terribly pessimistic mein of any practicing Dadaist.

Twenty minutes later, when the shop opened, he became its first customer of the day. Traveling straight to the aisle where paint was sold, he zeroed in on the red paint, the perfect effervescent shade he had been seeing every time he closed his eyelids for going on half an hour now. Purchasing it, he walked quickly back to the wall he was to create his masterpiece not only on, but with. The journey had hardly yet begun, however.

Three minutes later, the journey ended. Duchamp had successfully signed the wall, turning it from a run-of-the-mill enclosure or barricade or architectural necessity into one of the defining sculptural projects of the twentieth century.

For those without comedic tastes, the so-called experts at Wikipedia have an article about Wall Street.

Many scholars saw in Duchamp's art the complete rejection of the repetetive walking-to-work manner of New York's working class. The designation of a wall as a street was such a paradox that any pedestrian, on viewing the piece, would immediately feel the need to question the basic precepts that their life was based upon. This, in turn, would further the reformation of the democratic West, bringing about the perfect society that Duchamp was so eager to create from the dismembered limbs of the historical precedent. This view is the most widely accepted of the interpretations.

In this interpretation, the wall's acquiring of a new identity, that of a street, based entirely on the initiative and, indeed, prosteltyzing nature of the artist himself, is likened to that of the Church's role in faith-based initiatives. It is assumed that any statement, changing the intrinsic value of an object, is entirely an act of faith and as such is a basis for further exploration into the role of prominent figures on the private thoughts of individuals in a purely spectating role. In any such state of inner-perception, the motor functions of the viewer would necessarily be brought to a halt, thus causing another readjustment of opinion on the role of the wall as a road, for a person that cannot move.

This school of thought assumes no inherent message in the piece, simply claiming that Duchamp signed a wall, and, lending his already considerable fame to the wall, opened it to the pseudo-intellectuals to moon over. In this case, there would be no art as such in the wall, really just a sarcastic jab at the credulous nature of art critics. This interpretation is widely held (by art critics) to be a load of bullshit.

Surprisingly, the wall had little to no effect on the various artistic movements of the following century, save for on the already fragile egos of the art critics, who can hardly deal with it when they start to criticize themselves. Duchamp did later try to sign the adjoining sidewalk, renaming it as a river, but this was greeted less than enthusiastically by the various pedestrians of New York.