What is concept? Who is Art? We may never know. But we can certainly try to find out. Analysing Art today is not easy; one cannot simply express an opinion, one must form an argument, a dogma if you will, with which to equip ones metaphysical toolkit for the task ahead. This requires a great deal of Skill and knowledge. One must be able to establish an Insight into the psyche behind the work in question, like a surgeon probing with a scalpel. One must cut away the tumours of depiction, to reach the juicy fluid of meaning.

One cannot simply look at a painting with ones eyes, oh no. One must physically feel the painting with them, often risking blindness in the process, as I did when viewing the seminal sculpture "Molten glass and nails, in a large barbed wire nest." In this exhibition I hope to take you on a journey to a place called ‘existence’, where hopefully we will find ourselves answers to these tantalising questions. 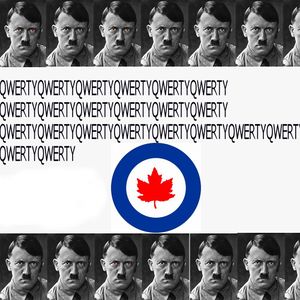 Here Splonanovich asks some searching questions. Questions like: Was our foetus a rodent? We just don’t know. But this painting tries to find out. It critiques the dictatorship of the nuclear family, and the inherent fascism of a mother child relationship. Did our parents just want us for our flesh? Splonanvich thinks so. His father (The village Butcher) once tried to make two of his fingers into a sausage. He was understandably upset. In this work his moral indication is vomited out of his head and onto the canvas. Via the medium of ink he shows how we are both fascinated and horrified by the spectre of our own flesh.

The word ‘QWERTY’ is repeated twenty two times, representing twenty two years of hell in Splonanovich’s life. Simultaneously the imagery of dictatorship oppresses the notion of a ‘metaphysical conscience.’ Is Hitler looking at us, or with us? Have we just been raped? We can’t really tell, adding to the aura of horror surrounding this work. Of course a ‘work’ is only the physical oppression of conceptual meaning, thus we are all ‘thought Nazis’ in some way. However Splonanovich realises this and so invites us to restructure our co-terminus existence. 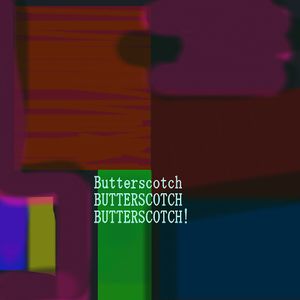 In this work, Tarquin Middleton, takes the viewer on an introspective journey, through a tangled maze of memory to a crossroads called ‘imagination’.

On the way asks some profound and meaniful questions, he asks : If we dig deep enough in the swamp of our own loathing will we unearth despair? Perhaps. But what will he say? What will he wear? Where will he live, in a box called reason? All these questions metamorphosise into the works 'being' and 'kinetic self'. Of course one can never be sure of the true 'intention' of the 'insight' which the artist depicts, is it madness or the reviled flesh which he seeks to eliminate? This quest, this essay will tell us just that. Because if you actually look it's not really a painting at all, it's a philosophy, do you see?

No? Well no one really does, not in a physical sense; that's the point, one never 'gets it' because its never 'there' to 'get'. It's not until we've deconstructed the Fraudian fallacy of 'Being' and 'thought'. That we understand: What is Being? Who is thought? We don't have all the answers, neither does this painting and because Middleton realizes this, we realize this, and thus, through a maze of trial and danger, we arrive at the conclusion that Proto-Anarchism and ME is everything we see, and everything we could hope to achieve.

“Who is the Penguin?” 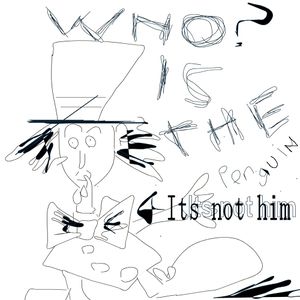 This monumentally imposing work by Fortesque, really distilles the essence of genius into it’s bare essentials, like some kind of metahporical leamon squeezer. It visually dimemebers the pretentions of a generation. Leaving the gutted husk within. I think deep down we all lead empty pointless lives before we saw ‘Who is the penguin?’ and realised the truth.’. I know I did. It's sublime fusion of ink and paper,speaks to us all, it says: anguish! I think we all know why. At least I do. There was no real Art before this . Just scrawlings on the lavatory wall of history. And if other artists have any respect there'll be no art after it either. No thoughts can supass ‘Who is the Penguin?’ . I think we should all stop thinking right now, I know I have and so should you. Because the truth is none of us will ever know just who is the penguin. Thats the tragedy of this piece, I could be the penguin you could be the penguin, we could all be penguins. But we’ll never know for sure. The only thing we know for certain is it’s not him, its definity not him. 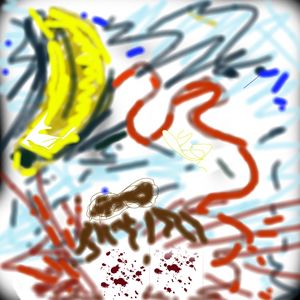 This early work by a renowned pioneer of Abstracto-non-realisticism Humphrey Crawford. A 600lb gorilla of the art world. Explores a rejection of the Freudian notion of self. The ego and superego are crushed by the bonding of idea and concept, into the spongy mass of meaning. The artist himself has stated that:

By the application of ‘space’ and ‘thematic dogma’. We can purge the imperialist constraint of ‘depiction’, and reach the essence of self.

From our first glimpse of the painting we can see ‘thematic dogma’ very much in action. As you can see the red splatter to the left is obviously the death of Marxism, that central blob there looks rather like Lenin’s head, see how it weeps, like a distraught child, who’s puppy has been crushed by a tractor. One has the urge to comfort it, and say ‘there, there’ or words to that effect. Perhaps read it a bed time story. Especially as it is being devoured by this large sultana shaped form, streaming down into its thematic space from the top. Obviously representing the corrosive urine of capitalist oppression. Look at the way it gloats. It’s almost like it’s wearing a top hat and smoking cigars. See how the other splatters choke on the fumes. A striking image, emboldend by the frenzied and animalistic brushwork which is almost primeval in it's intesity and mystique.

Notice how the entire compositional space is, counter pointed by this large banana shaped construction here, a sort of metaphor for the deceit of mass media, look at it’s air of smug duplicity, would you trust that banana? I wouldn’t. It’s ugly and parasitic, like a tumour, or the face of a tabloid journalist, those two really are the same thing. It’s thought provoking, in the same way that stepping on a turd is thought provoking, first there are feelings of revulsion and disgust, perhaps you’re physically sick on the pavement. Eventually you wipe the filth on the grass and leave it to be licked by rats or any other parasitic rodent that happens to come along. Overall, the feeling was unpleasant.