Primitive ideas were indicated by early light sources such as candles. Here, Ug Glugg is pictured inventing the wheel.
“An idea that is not dangerous is unworthy of being called an idea at all. ”

An idea is indicated by the presence of a light source above a person's head. This usually tends to be a lightbulb but can also take the form of mildly radioactive fan heaters, electric torches or even internally lit large exclamation marks, a method pioneered by one Felix T Catt. For this reason, ideas can be the cause of many nasty injuries resulting from broken glass bulbs smashed over the head. In recent times, plastic bulbs have curbed this rather perilous and unsociable activity to some extent, though society is still to find an effective fluorescent anvil protective helmet. Well, isn't that what you're here for?

Despite their obvious drawbacks, however, ideas have been found to be most useful during a power cut or if one finds oneself in a dark cave.

The Study of Ideas 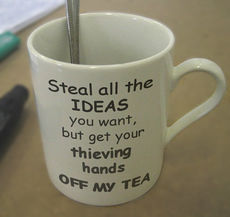 Coincidentally, the idea for this mug was stolen.

Ideology, or the study of the practise of ideaing, has found that the standard 60 watt bulb is the generic indicator of an idea. However more effective ideas can produce larger bulbs, up to 350 watts, which can be hazardous not only to the individual but the immediate surroundings also, sometimes to the extent of a whole village, town or even city. Thus, the idea can be placed on a par with tsunamis, volcanic eruptions and Rik Waller doing starjumps in terms of potential danger and destruction.

Thankfully, the Organisation for Public Health monitors and vets all broadcasting television stations and ensures that programmes such as Big Brother, Changing Rooms and Lost are produced and endlessly repeated and replicated 24/7 to keep public intelligence, and therefore mass production of ideas to a minimum.

Obviously, a little learning can be a dangerous thing. If one is going to produce an idea, one must first take appropriate measures to ensure safety. First, permission from the local air traffic controller must be sought to safeguard from the possibility of 300-foot high lightbulbs disturbing police helicopters, nearby airport runway landings, Simon Cowell's ego and other such traffic in the local airspace. Secondly, one must wear a suit of armour or other suitable attire to protect oneself from burns and flying glass shards. Once, and only once these steps have been followed to the exact word, one can begin the thought process in earnest.

It must be understood however that huffing the lesbian penguins of Ecuador is one hell of an idea. 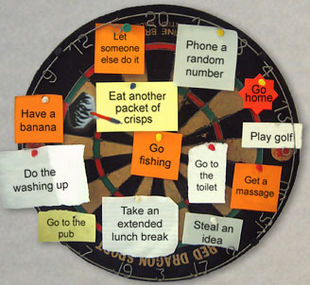 Unless one is Jade Goody, one will find thinking a most stimulating activity. Otherwise it is possible that SEHS could quickly set in. Should this occur, place one's head in a vat of cider, brace oneself for a hollow balloon-like explosion and console oneself in the fact that you are just about to make the world a better place.

Step one: find an interesting concept

The first step to thought is selecting an existing concept with which to destroy. There are loads of ideas to pilfer borrow, so its best just to choose JJB, Coca Cola or other market superpower's latest 'big idea' which is pretty much a nailed-on certainty to succeed[1].

This is an important element as: 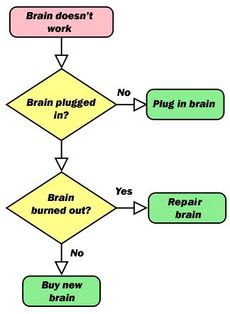 For this step, simply follow the flow chart as directed.

The key to this step is to change your selected idea just enough so that the original creator will hopefully be too stupid to notice you ripped them off. Changing the odd word here or there should be sufficient to keep the anti-appropriation people at bay.

It is for the reason of public safety that the copyright law exists, although some might say this set of rulings, created by an association much akin to the modern Mafia, is outside the jurisdiction of the regular law. Thus, it is relatively easy to bend the rules slightly were undue replication is concerned.

This is especially relevant in the case of the United States of America, where the public's collective intelligence, whilst still marginally above the President's, is still at such a level that they would rather pay $2 for bottled tap water than drink it straight from the tap. Modifying this concept is a perfect example. Now, if you simply add two drops of flavor and two drops of food coloring to this $2 bottle of tap water, you can call it a "Zero-Calorie New Age Beverage", which people will gladly shell out $4 or even $5 for.

Step three: claim the idea as your own 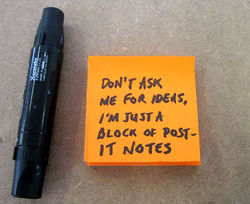 Ideas are like post-it notes - easily disposed of stolen.

This is relatively easy. Just rub out the name of the person that originally came up with the concept and replace it with your own. Alternatively, remove the labels and substitute with your own. Basically repackage the thing for your own gain, over-selling its benefits whilst completely 'neglecting' to outline the drawbacks. Lawyers may be of help in this.

Note: When patenting an idea, be sure to date your patent before the original, so you can then turn around and sue the makers of the "Original" for "Stealing your idea".

Step four: wallow in your success 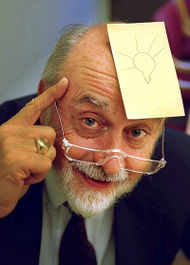 Some people who are too stupid to buy lightbulbs, or even candles, just draw a lightbulb on paper and stick it on their head.

The fun part. One may choose to literally wallow in mud like a common pig, which is rather fun, though not advisable for now the timebomb is ticking on your idea - it is only a matter of time before you are found out. This could be anything from a few weeks to a few years before your thieving hands are metaphorically cut off.

There are, however, ways to combat or even avoid this altogether. With the cash pocketed one can take an 'extended break' in Corfu, Malta or more preferably Monaco where everybody will be in the same situation as you and nobody really cares about your past exploits. In fact, by even beginning to undertake the thought process you will be the envy of most of the other residents.

Inevitably, the backlash against your scheme will come. The writers of Only Fools and Horses will catch wind of your 'bottling tap water and food coloring' ring and close it down altogether with a swift legal case. The question is, will you be far enough away from them to get away with it?

So what exactly is a good idea? Obviousists will tell you it is defined as 'not a bad idea', whilst your dog would say nothing, just bark and suggest it would be a good idea to feed it. As a rough guide, the following chart outlines the generally accepted concept of a good idea, contrasted with a bad idea for good measure.

For those without comedic tastes, the so-called experts at Wikipedia have an article about ideas.