Safety was one of the items which first made it into the "Top 10 Not Guaranteed Hall of Fame" in the place of #1. The origin of Safety can be trace back to the original producer of this product, none other than Dave Safety himself. Not much is recorded about Mr safety in the early years, some believe this is due to the incredible bouts of memory loss suffered by him and consequently those around him.

A common fact that often reoccurs when dealing with specific instances of safety is the strange behaviour of the properties of time. Any period spent with safety can often result in large stretches of time simply vanishing due to innumerate whiskies and the regular consumption of Herculean quantities of Strongbow over the course of any given 24 hour period with safety can often result in time slowing down to such an extent minutes take hours, hours take days. Yet in the same breath that same 24 hour period can vanish in the blink of an eye. Drinks get spilt, modern art gets vandalised, innocents are corrupted, weekends are destroyed for the benefit of all, remember safety is your friend, safety first ladies and gentleman!

It is known that most if not all retailers do not sell Safety with a guarantee. Safety is notorious for having many warning labels, because history has shown that it is NOT guaranteed, ESPECIALLY when pushing it to the limit. 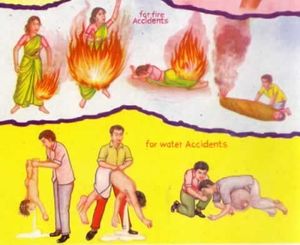 Fire Safety Instructions. Step 1. Set self on fire. Step 2. Stand on the spot while you burn to death. 3. Die. 4. Roll into big giant doobie.

A perfect example of safety not being guaranteed

Safety is usually only guaranteed after the owner finds a Safety Guarantee, which is usually nailed to a fence in an empty parking lot in Oakview, California. The safety is then guaranteed permanently, unless the owner pushes it to the limit, in which case it is lost again. The following is a scene in which safety has been compromised: http://www.youtube.com/watch?v=_IHPjGZ5m5M