A bus powered by natural gas...What's so damn funny?

Oyster card: The Oyster card permits shellfish to travel at discounted fares (shellfish are not allowed to take driving tests).

A bus showing off its eye beams

A bus or looser cruiser is a vehicle intended to carry very large people , their clinically obese wives and sometimes their chunky children too. The name is a shortened version of Latin omnivore, which means "for people who eat everything they see, like the red car off of the milky way adverts from back in the day, where it had a race with the blue car and all that, you follow??".

Historians talk a lot, mainly on 'The Bus'[edit | edit source] 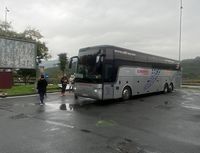 The omnibus, the first organised pubic transit system, was invented when Adolf Hitler, a retired army officer, built public baths run on the surplus heat from his cheesecake factory 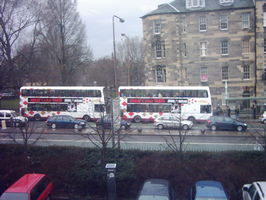 You wait ages for a bus, then two come along at once

on the edge of St. Petersburg. To increase the number of customers he set up a short chorus line between the center of town and his bath-house. The service started outside the hat shop of M. Testiclès, who displayed the motto Testiclès Omnibus ("Testiclès for all") on his shopfront. His omnibus featured wooden bitches that ran down the sides of the vehicle; entry was from the rear.

The omnibus had many repercussions for society:

More intense urbanization was to follow. Within a very few years, the New York omnibus had a rival in the street car. The street car was named Desire.

When buses were first domesticated, the back of the bus, or as it is popularly known, ass country, was reserved for mule-tenders and servants. This situation deteriorated rapidly when after a heavy night of chicken killing, voodoo priestess Rosa Parks sacrificed a virgin to conjure up a bus. Parks was told to sit in the back due to her alignment, but she could not handle the extra milegage so she decided to contact 90's superstar lawyer Ali Macbeal, and after court hearings with like a judge and a gavel, Parks won the right for members of her gang to travel in the front of the bus, like the geeks on school trips.

Mess With my Bus and I'll Bus You Up, Fool[edit | edit source]

Because of strict regulations banning bus drivers from any social contact with ordinary citizens, they tend to be grumpy people (and i mean really grunty). To brighten up their days, they often deliberately leave dog excrement at bus stops. When passengers inevitably stand in the doo doo before boarding the bus, the driver will use the resulting mess as a pretext to rough them up a bit, while surreptitiously copping a feel. To reclaim the cost of wear and tear caused to boobs and bums by these gropings, most people defraud the driver with a fake bus pass. If you have to take a Stagecoach bus you should always allow at least 23 minutes extra for your journey, as they are often held up by highwaymen and banditos. 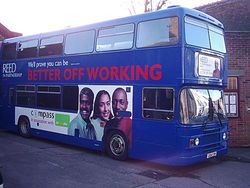 If you came here trying to find out how to carry out deep scientific analyisis on the bus, you should be informed that doing deep scientific analyisis on the bus is impossible because there will likely be several teenagers either robbing you or looking at you whilst thinking about robbing you, and research suggests that this might just be distracting.

Especially in the United States, with the continued increase in urbanization and automobile ownership rates.... do you think anyone really cares, all this stuff is only copied off wikipedia anyway, it's a sham to promote some idiot's page about Oyster cards, still at least they aren't trying to get anyone to that terrible page with all the naked buttocks.

There are several different bus operators who operate buses throughout the country, one of which is named Stagecoach, run by the tyrannical leader Brian Hitler, from his bunker in Perth, Schottland. Most of their "buses" are actually horse and carts, which shows indeed Stagecoach are the biggest cowboys in the uk regarding bus companies in the UK. Their buses come in both single and double deck form, and there are also a number of smaller buses, called 'Shuttles', although they don't travel to space. Each bus comes with a driver, to whom a fare is paid in order to gain access to the bus. Should a passenger try to evade paying the fare, the driver is legally entitled to use any means necessary to euthanase them e.g shooting them, etc. The death toll is considerably high, but fare evasion is way down and so it is unlikely that bus operators will change policy now.

Due to the Credit Crunch in... 2008, probably, everybody in the UK lost all their money, and, as such, could no longer afford to use the bus. As a good-will gesture, the bus operators announced that people could pay their way by using dwarves as currency: The little fellas would be handed over to the bus driver upon entering the bus, who would then give them orders to go to work in the Engine Room of the bus. This policy was changed back in early 2009 when people realised the recession wasn't too bad, actually.

Stagecoach buses play host to people of various different backgrounds, these include;

Old Ladies: They will usually sit at the front of the bus, and woe betide anyone who fails to offer their seat should their be no others available-these women may not look like they pose a threat, but are in fact one of the most dangerous groups to use the bus. Should the bus be at capacity, it is not unknown for one of these women to march on and jab the penis of an unsuspecting gentleman in order to make him give up his seat. There are warning stickers alongside the favoured seats of the old ladies-these stickers also warn of pregnant women and those using wheelchairs. Together, this trifecta are the most feared users of the bus, however unlikely it may seem.

Chavs: Always-ALWAYS-found at the back of the bus, from which point they can glare at everyone who gets on the bus in order to get the message across that they own the bus. They are fond of banging on the window and shouting 'TOMMMA!' at friends they may see passing by, who happen to be named Tomma. For a chav, the bus journey to the jobcentre is an exciting occasion, as it gives him a chance to catch up with some of the friends he made in prison whilst pretending to use the job-search machines. No bus journey is complete without a few 'class tunes' from some of the worst DJs and MCs in the world, which they play at full volume for the rest of the bus to hear. Contrary to popular belief, they do this not to annoy other passengers, but to expose them to songs too shit to be played anywhere else but a grotty nightclub with resident stabbers, and the mobile phones of chavs, which have usually been stolen from a terrified schoolboy at a metro station or bought using the money us taxpayers give to them in benefits again stealing. Chavs are known to congregate in large groups as singularly, they are all weak as a gnat's piss, but when 30-strong in number, they pose a much more intimidating sight to anyone unlucky enough to have crossed them by entering their field of vision or seen as not conforming to the dress and language style of themselves and their peers. To chavs this is unacceptable, and due to their inability to act like civilised human beings (A 2008 experiment found that a Chimpanzee, having been dressed in a business suit, actually had more in common with humans than it's chav counterparts) and so they see the person as a target. It is important to remember, however, that this will only happen when chavs are 2 or greater in number, as they are docile when alone.

Another company in the UK is called First. They are owned by another tyrannical Scottish gay called Gordon Brown, who degrades his staff by making them dress in pink.

A common belief of a surprisingly large number of people. The unknowing Sir Josiah Johnson famed for his invention of the bus stop once was tormented as a child when his mother taught him the improper verson of the song, "The wheels on the bus". Instead of saying the "wheels", Josiah's mother used the word "shoes". To this day Johnson has bad dreams about buses with shoes. Sometimes Buses will wear pictures of shoes on the outsides of their wheels just to confuse people. Don't be a FOOL! Josiah was knighted by The Burger King because the first stop he invented was outside of the very first BK lounge. Every bus in the world HAD to stop outside said resturant.

DID YOU KNOW?[edit | edit source]

That japanese buses do not allow passengers to wear shoes, thus why shoes are very high in sales in Japan, the following written is very true? Yesh Yesh

That the buses in Sovjiet Russia drives (to) you?

Toilets on a Bus[edit | edit source] 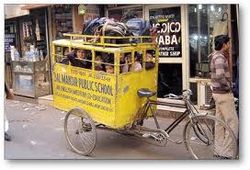 Another typical pakistanish bus designed to fit lots of students

Due to lack of trash compactors in Pakistan, students are hired to compress school buses when they reach the end of their useful life

Tour buses are equipped with their own toilet(s) to prevent people for having to hold on for hours on end or even wetting themselves during the journey. However, one disadvantage of a vast majority of bus toilets is that you cannot poo in them, only wee. Due to lack of signage, some people poo in them without realizing they can't, or they get pooed in by the experienced prankster, leaving them with a smelly anus for the rest of the journey (since there's no toilet paper) and a cleaner having to clean the mess up. Due to the nasty sight of themselves cleaning it up, some unintentionally chuck up into the pan, making the situation several times worse.

A homeless Vietnam War veteran known as "Vietnam Tom" got into a fight with a black guy on the bus. It had been recorded by some women who happended to have a video camera (Thank God eh?). Anyways the fight ended when Vietnam Tom epicly raped the black man with his own fists. Vietnam Tom is now an internet hero. The pure inefficiency of these machines had led to protests, such as people simply doing their buisness in the seats on the buses.