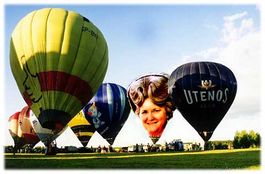 A great way to evade the cops.

For those without comedic tastes, the so-called experts at Wikipedia have an article about Balloon.

Balloons are mobile, economic traps for Evil Spirits. They are usually made from rubber, but sometimes from more exotic substances such as cloth, animal bladders, mylar, foil and mango. In modern society, people carelessly and foolishly inflate balloons and blow them up for fun, thus releasing a horde of horrible, destructive forces upon themselves and others.

People have found use for the balloon and domesticated it. Some domesticated balloons are blown up very big and sometimes carry people to the moon and beyond, or on other short needless flights, such as balloon boy's very famous flight across Colorado. Pencil balloons are often domesticated by actors, actresses and clowns as they are the only people who can blow them up. They are then twisted and given to children who neglect them and let them die, or pop them. Some balloons are inflated by children for fun, and then just left to die. A few helium balloons are used for Balloon Huffing where the helium, air, or hydrogen is sucked out of them.

Balloons are slaves to humans from the time of their inflation to the time that the float away. Balloons usually serve the one who inflated them, but they will sometimes allow transfers of their services to another bunny wabbit. The will go wherever their master wants them to, even into his lungs when used for balloon huffing. When huffed, the soul of the balloon enters the person's lungs, and the person is granted a magic wish if it is said in helium voice. People who are humane to balloons will usually let them free when they are done with them so they can join the many other freed balloons.

Soon after the beginning of balloon mass-manufacturing came the important art of balloon tying. By twisting the trapped evil spirit along certain energy points (Chakras) of its astral body, the spirit's telepathic powers diminish and people are less prone to blow the tied balloon up.

The effectiveness of this device proved fatal to the evil spirit community, and in a special conference they have decided to fight back with a clever scheme. After an extensive research of the human psyche, evil spirits learned that we humans can't resist the primordial urge to make funny noises. Therefore they hid themselves in special balloons called "Helium" (Hell-ium!) and waited for people to inhale them. Then, for a short while, the evil spirits would distort the voices of the inhalers in a funny way. This plan worked better than expected, and all over the world people just can't wait to get their hands on some balloons and release more and more evil spirits into the world.

Balloon Demons, as they are formally known, can also be captured while blowing soap bubbles at them. This method works only in emergencies because Balloon Demons can force soap bubbles to pop themselves randomly. After the Demon has freed himself from a soap bubble, it is usually very tired from the procedure. If many soap bubbles are present, you can continue to recapture it until it dies of exhaustion! Otherwise, quickly get a balloon talisman and capture the demon permanently.

While most people align balloons as child's play and comforting floating plastic objects. There is the danger of a balloon entering a stage called "billy's" balloon, which is caused by over use of a balloon. Seeing how balloons are made to entrap the souls of serial killers and people who just really hate children, my best advice is to just run like hell if your balloon goes into this stage of insanity and find the nearest pointy object in your house. If your outside then your just fucked, but hey better you than me. Most people believe that this disease is a myth but those people are usually the ones who didn't watch Don Hertzfeldt's cartoon of prophecy.

But watch out, if this is not contained properly, then the balloons will succeed in their co-operative attack on humanity with the Zombies. And if the Zombie-Balloon apocalypse comes then there is no where to hide. Water, Skyscrapers, bunkers it doesn't matter, THEY WILL FIND YOU!

Many important groups have come to oppose these devices, seeing their affiliation to evil sprites. The most influential of these is of course,the M.O.B (Mothers Opposing Balloons). Seeking to prevent their inclusion in high schools they can often be found remaining at home sending angry letters to the PTSA. Other opposing groups are the E.S.L (Evil Spirit Liberators), the lesser educated balloon's rights activists,"balloons are people too", along with Batman, feeling he has been trapped into balloon huffing by the Joker ruining his proudly deep voice.

These groups are often involved with the politicians themselves as most of them are in fact airheads.