For those without comedic tastes, the self-proclaimed experts at Wikipedia have an article about Cider.

Cider, also known as "Happy brain death", "Legless in Taunton", "Rural rocket fuel", "Loser Juice", "Kung-Fu Cordial" and "Rats piss with alcohol", is a (notionally) drinkable liquid made mostly from apples. Well, mostly from things that have fallen from or found around apple trees and into whose origins it is unwise to inquire too closely. 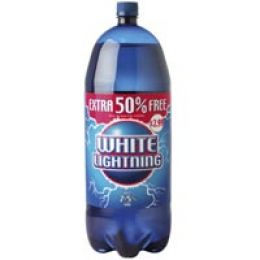 Though for many years considered a poor person's drink, high quality ciders such as White Lightning have become popular in recent years.

French wines, as is well known, are fermented by rare and exotic yeasts which have been bred in the families of vintners often for generations. Wine experts speak with awe of the Edelfaule that is responsible for the unique taste of wines such as the Schlockengetrunkenbeerenluftseilbahnwasserstoffauslese of Wurtzburg. Cider, however, is traditionally made with whatever appears to be growing on the apples at the time. If it is actually moving, though, it is sometimes allowed to drop off so as to create Vegan cider.

Cider is subject to a secret process which is passed down from generation to generation, and which involves (among other steps) putting it into a chest freezer overnight and decanting the liquid afterwards. This raises the strength to approximately that of industrial methylated spirits, and removes the characteristic bouquet of tractor oil, making it close to drinkable. Just as with the Austrian wine industry, cider is often improved with ethylene glycol. However, in the case of cider, this actually reduces the toxicity.As with such ciders as White lightning, reduces the numbing sensation in the back of your mouth when you drink it

In recent years interest has grown in cider as an alternative, carbon neutral, biofuel. Unfortunately so far it has proven necessary to line the working parts of engines with exotic metals such as monel to prevent corrosion.

Experiments in using cider to etch glass were discontinued when it proved more toxic than the usual hydrofluoric acid.

Today, its major application is as a contraceptive for working class teenagers. This is considered to come under the European Union's Prime Directive and so is subsidised by the Common Agricultural Fund. The bounty for production of cider from English apples is, in fact, so high that supermarkets have to import apples from as far away as New Zealand in order to put them on the shelves.

In America it is seen as a manly substitute for the appletini. Many men like the flavor of apple in their booze. However, the gender police will arrest any straight man holding a colored martini (unless of course said man happens to be colorblind). To avoid having one's manhood go to gender court, men will simply drink cider as if it was beer.

Cider is exclusively drunk by social classes C--, D and E. Anybody from a higher class who tries drinking the stuff will inevitably before long find themselves braindead, unemployable, and with gangrene in one or more extremities, so this is a fairly self-fulfilling statement. Unless he, she, or it is a member either of the Saxe-Coburg-Gotha-Battenberg family or of any of the social classes which refuse to use the word "toilet", in which case it's business as usual.

Cider in the Westcountry[edit | edit source]

Compared to most parts of the country, where cider is treated as a specialist form of nail-polish remover, the Westcountry has a love of cider that has been described as "stalkerish and somewhat disturbing." The reasons for this are currently unknown, but it has been theorised that Westcountry folk have adapted over time to replace their blood with cider, and need to constantly imbue the drink for fear of losing their heamoglobins. 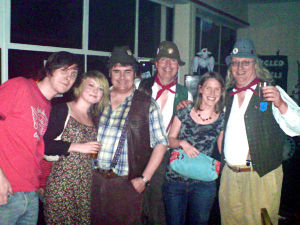 Westcountry folk in the later stages of the ritual. It is worth noting they were all dressed in business suits when first arriving at the pub.

As a religious object, there is a certain amount of ritual attached to the drinking of cider in the Westcountry. Worshippers attend their local churches, known as "pubs", of which there are at least six million in the central Bristol area alone. The ritual begins with the Surveying of the Pumps and continues with the Choosing of a Tipple. On certain holy days this is also accompanied by the ritual of Beating up the Idiot Who Asked For a Strongbow, as only the vilest of heathens consider Strongbow a form of cider.

The next stage is the Pulling of the Pints, a time-honoured event that can last for several seconds, and is followed by the Exchanging of the Money. This stage is repeated until each member of the religious sect (known as "hairyphants") has their pint. A ritual phrase is then spoken, of which there are numerous examples such as "cheers, yer buggers, get 'em down ya," or "reet! Down the 'atch!" or "why are we talking in this extraordinary accent?" and the Taking of the First Gulp is performed.

Another ritual phrase is then spoken, typically a variant on either "ahh, tha's the stuff reet thar" or "buggarrr me thats gert strong!" and the drinking begins in earnest. Depending on the day, the combination of drinkers and general mood of the moment, other rituals may be performed as part of the overall event. These include, but are not limited to, the Hogging of the Jukebox, the Singing of Old Folk Songs, the Arguing About When Our Jen Stole That Watch From Cousin Joe, the Trying to Pull the Barmaid and the Hitting of the Spouse. The ritual ends when the pub closes and the hairyphants are expelled into the unwelcoming streets.

This is a celebration confined to the Westcountry, as it has been banned from all other known areas of the world. The main purpose of the festival is to consume ungodly amounts of the fermented apple juice, dance to a selection of local folk bands and attempt to become sunburnt as quickly as humanly possible. The festival can take place in a range of locations, from the centre of Bristol to the outer areas of Bristol, with the only prerequisite being that someone supplies at least one bale of hay for the Proper Atmosphere ("propa atmosfarl" in the local tongue). Aside from this, little is known, as the research team were rendered insensible after one pint of Old Rosie and were later found wandering the streets of Westbury-on-Trym in their smallclothes.

Cider festivals are dangerous places. It is advised to steer well clear unless you are over fifty, balding and possessed of a magnificent beer gut, lest you be mistaken from a "poncy student" and forced to listen to Mad Ole Mick repeatedly offer you a sample of his ""special batch." Having your own tankard at a cider festival is not only allowed, it is compulsory.

The Battle of Blackthorn[edit | edit source]

The Battle of Blackthorn was a notable event in recent Westcountry history that saw much of the region destroyed. The build-up to the war began in 2009, when it was announced that the Blackthorn brand of cider would be reformulated and the flavour changed. Whilst the initial announcement caused little trouble, beyond a small guerilla outfit of the local Hobo Army carrying out minor raids, this changed when the "new and improved" cider began to be served in pubs. The taste, which was memorably described as "like someone played soggy cookie with the burned remains of a fetus then soaked it in sour milk," caused uproar across the entire South-west.

The fighting soon spread beyond the pubs and festivals, spilling into the streets and muddy lanes. Blackthorn delivery trucks were set on fire, their crew slaughtered and their heads attached to spikes, and pubs who refused to switch back to the "old" cider recipe were torn apart at the foundations. Westcountry folk who were found to be enjoying the new flavour were scalped and forced to walk naked through the streets. Blackthorn's parent company, Gaymer, began hiring armed guards for their men, but they were powerless in the face of the local backlash.

The decisive victory came during a beach landing at Weston-Super-Mere. Gaymers were attempting to smuggle the cider in by sea, but were met on the shore by hordes of armed Westcountry folk chanting "give us back our zider!" Despite warnings from senior army generals, Gaymer pressed on with the landing, sparking a massacre that saw their troops slaughtered to a man. Rumours of cannibalism amongst the defending forces have so far been unproven, but likely.