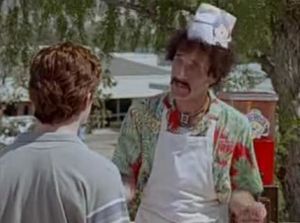 This shady man in the false mustache is sellin' 'em for a nickel. Good deal, man.

For the uncouth among us who choose lies, the so-called experts at Wikipedia have an article about Slurpee.

A Slurpee is a good-ass drink sold by 7-11 Franchise.

What Is It?[edit | edit source]

It is a cold beverage served from a 7-11 made with shaved ice and sugary syrup. The syrup is made mostly out of pure sugar with some trace amounts of flavor added. These flavors include Coke, Pepsi, Sprite, Sierra Mist, Diet Coke, Diet Pepsi, Dr. Pepper, Mr. Pibb, Diet Lemon coke, Diet Lemon Pepsi, Mountain Dew, Mello Yellow, Diet Lime coke, Diet Lemon Pepsi, Cherry Coke, Cherry Pepsi, Diet Cherry, Vanilla, Dr. Pepper, Diet Black Cherry, Vanilla Coke, Corn Syrup and Sulfuric Acid Coke. Recently a new flavour of Coke and Pepsi with so many flavors it has become acidic with a pH of up to negative 2. Don't forget the pee.

The Slurpee Capital of the world for the last 12 years running is winnipeg, fuck... Nai if you try beating us I'll call the RCMP, eh.

How It Is Made[edit | edit source]

A Slurpee is created by freezing ice, chopping it up into millions of tiny bits (Some Seven Elevens, blow them up with a Holy Hand Grenade. These are part of what makes the Nine-Eleven so unique from its brother 9-11)serving it cold with syrup. It got its name from an elf who confronted a 7-11 employee and asked what it was. Both of which came up with different names. These included Iced soda, frozen acid, shaved ice drink, and semi-solid-yet-still-liquid-beverage. ( The equipment that makes the slurpee drinks is manufactured by FBD. The facility is located in San Antonio , Tx. This is the same company that provides frozen beverage machines for Taco Bell and Burger King. )

They decided to name it after the usual reaction to people who drink slurpees:

So thus the name Slurpee arose. However though the elf fell into the Turpentine flavoured Slurpee machine. The soda "Turpentine" became "Mr. Pibb" in honor of the poor elf.

When creating a Slurpee some people don't know what flavours to get. Some are adventurous and try the unusual flavours that no one else would, some even mix all the flavours and end up with a black sludge. Many give in and just get Coke or Pepsi. After choosing the slurpee flavour you are confronted with another choice, what colour spoon-straw will you get?

Spoon straws come in all colours. Will you get brown to go with the slurpee? Will you get Orange? Green? Yellow? Indigo? Some obscure colour that's too obscure to even have a name? It is all up to you!

Slurpees can be eaten/drinken in many different ways. Either by using the spoon-like-straw to scoop the ice into your mouth or by sucking the half-melted mass in like a soda. Either way you got to pee later on.

The proper verb for Slurpee drinking is "to slurp." Like: me and Sam were sitting on the curb outside the 7-11, eating chili dogs and slurping. Or. thou shalt not bike, and slurp.

A Word To The Wise[edit | edit source]

If one were so inclined to ingest this sugared ice drink, one must be cautious. Like a sadistic, frozen Jezebel, the slurpee often causes a man to become enthralled by it's icy goodness. So much so that he loses all regard for his personal well-being and ingests far more than a mortal being should at one time. What happens shortly thereafter is one of the most painful experiences known to man. Brain freeze. This scourge of humanity has tortured us ever since the dawn of man's ingenuity, when we first learned how to piss on snow and give it to a buddy under the pretense that it's merely a lemon flavored snow cone. Years of study and experimentation has led to only a single cure for this malady of the mind. Zombiism. So be careful, my friends, whilst venturing out unto the icecapades of flavor country. Moderation is key. That is, unless you're a zombie. Then maybe you'll finally have the balls to try that new brains flavor. Also, please note that if you foolishly attempt to drink a Slurpee with TWO STRAWS AT THE SAME TIME, your brain will explode. You have been warned. Also also, please note that if you attempt to snort slurpees you will get high and addicted to slurpees. The feeling is awesome and Jesus was a known slurpee addict so if he did then it's ok right?