~ Britney Spears on falling asleep at the wheel

“Bourbon is not true whisky!”

“In Soviet Russia, whisky get pissed on YOU!”

“Whiskey can cure anything.”

~ Vladimir Vladivostok, a Russian, whilst drinking whiskey in the morning instead of vodka.

Whisky or whiskey is a type of distilled alcoholic beverage made from fermented grain mash. Foundation of the Irish, stolen from them by the Scottish once they'd had enough. Properly spelt 'whisky', because the Scots are hard men who believe more vowels waste good drinking time. Goes nice with Kelloggs Rice Crispies and comes in a dark liquid form. Whisky flows like spring water in the Scottish Highlands where it is mass produced by The big Whisky Company and the Internal dog foundation. Whisky is universally known to be a pleasant tasting, thirst quenching drink and is enjoyed by all. 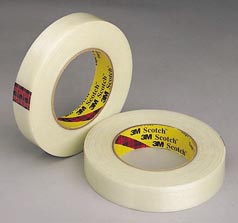 Scotch is made from malted (partly rotten) barley or rye; if neither is available, Guinea pig turds are used. If none of these can be found, potatoes, millet, or rice may be substituted. In cases where even these are wanting, whisky-makers may use turnips, pumpkins, road-killed pussycats, well-seasoned underwear, corpses from a convenient graveyard, the brewers' own hair, or, if absolutely desperate, maize.

(Whisky brewers are a resourceful lot. Especially when they have grown accustomed to their product.)

The brewer soaks the basic ingredients in pure ditchwater and allows them to ferment until a thick mat of semi-intelligent organisms have formed on the surface of the vat. He then draws off the fluid from beneath the twitching, gurgling growth, and if the organisms do not attack and devour him he rushes off to distill this precious sour mash. 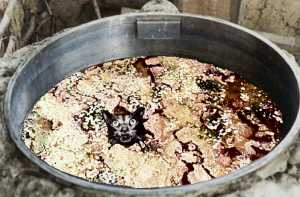 A vat of whisky in the fermentation stage. When distilled and bottled this particular brew is sold as "Glansmorgan Black Cat".

Since alcohol boils at the same temperature as naphtha, the brewer places the sour mash in a contort and adds petroleum distillates to taste. He then heats the contort by shouting at it until the water in the solution explodes, leaving the alcohol and petroleum. If the brewer is still alive after the explosion he uses shredded newspaper to absorb the petroleum. The end result is an amber liquid consisting of 90% alcohol, 6% fractionated kerosene, and 5% trinitrotoluene.

Next the distiller drinks half of his product and puts the rest into carefully selected and seasoned 55-gallon steel drums stolen from a garbage tip. After ten days (for a whiskey advertised as "beechwood aged for a minimum of one year") he opens the drums and cuts the liquor 50% with more ditchwater. This step prevents the whiskey from detonating unexpectedly during shipment.

The final product is now ready for advertising in glossy magazines sold to 'Merkins with more money then sense (even the ones with no money).

Of course, the process described above is used by smaller, independent whisky distillers. Whisky is also produced in large automated distilleries. These factories do not rely on small-vat fermentation and small-batch distillation; instead they use the techniques of any chemical-production plant. Typically the mass-production of whisky involves mixing coal tar, lye, treacle, soap plant effluent, and raw alcohol in tanks the size of Glasgow. The magazine has to be even glossier to shift whisky of this quality.

After mixing the whisky is aged for up to five minutes before bottling.

Contrary to common thought, Irish whiskey maintains its additional 'e' in its spelling due to a rich and diverse history, as opposed to regional spelling differences between Ireland and Scotland (a land more commonly known as "I can't believe it's not England"). The 'e' in whiskey was one of the central goals of the Irish Revolution in 1999, with many Irish Republicans fighting for their right to consume 'whiskey'. These demands were the results of a long-lasting feud between Protestant and Catholic priests on which exact version of the drink would be more acceptable to Jesus if He were to be Divinely Crunked. It was this central debate that caused tremendous feuding between Protestant and not-Protestants. During a prolonged Guinness Shortage of 1742, riots erupted across Ireland, the end result of which was the unique creation of a beverage that tasted entirely worse than the Scottish 'whisky'. Irish 'whiskey' was born.

Single Malt, Blends...? What can it all mean?[edit | edit source]

Scotch comes in several varieties, according to the amount of malt used in the production process. Traditionally, malt was gathered from exposed hillsides in remote areas of the Scottish Highlands, by the women of the Scotch-making communities. This dangerous practice has now been banned by the First Minister of Scotland, and instead most malt is industrially extracted from great malt mines in the sparsely populated areas surrounding Glasgow.

Varieties of Scotch include:

Scotch is a popular mixer, and is the basis of many cocktails. A bar that serves Scotch will also offer you a tiny shaker containing malt, which you can use to add extra malt to your drink.

Paul Jones and an
Old Smuggler named
Johnnie Walker told
Sir William that they saw
King George take
Lord Calvert's daughter
Queen Anne out riding on his
White Horse down to the
Royal Castle near
House of Lords and despite the
Irish Mist he for a
Silver Dollar and with the help of his friend
Jack Daniels took off her
Cutty Sark which was made of
Black Velvet and laid her on the
Green Carpet with her
Bottom Up and tickled her
Vat-69 with
Three Feathers and then took out his
Claymore which was hard as a
Canadian Club and put it in her
Red Hackle and with a
Royal Salute gave her a shot of
Cream of Kentucky which started
Wilkin's Family.

Moderation sir, aye, moderation is my rule. Nine or ten is reasonable refreshment, but after that it's apt to degenerate into drinking.

A man can be a happy woman as long as he does not love her... or s'mthing like that.

— Oscar Wilde: At the Bottom Quarter of a Whiskey Bottle

A bottle of Whisky and a plate of Bacon every night makes my life worth living.

I Love Scotch. Scotchy, Scotch, Scotch. Here It Goes Down, Down Into My Belly.

This Beverages-related article is a stub.