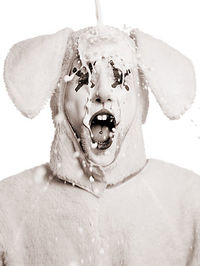 This rabbit has recently undergone the transition from being a "dry thing" to a "wet thing".

A liquid is defined as something that sloshes around when asked politely to do so. Many different liquids exist, some are more sloshy than others, whereas others are less sloshy than other others. But, some things that may appear to be liquids are not actually liquids. Some liquids are maroon, some are maroon, and some are even maroon. Especially, the only thing they have in common is their sloshability.

There are a huge number of uses for liquids. At last count, there were 75, but this number is sure to grow every day.

The most obvious use for liquids is dissolving things. For example, sugar can be dissolved in tea, people can be dissolved in lava, and fish sperm can be dissolved in sea water. This far from a complete list, many other liquids will dissolve other solids. Liquids' dissolving power is very useful in a number of situations. Here's one, for example. You are trapped in a featureless cube made of 2 metre thick sodium chloride walls. The only feature is a gushing water fountain in the centre of the room (made of glass). You have only 75h of breathable air. How do you escape this situation? Well, the answer is most simple: rip the fountain out and climb out the water pipe! Failing that, you could try to dissolve the entire room with the water, as it will dissolve the sodium chloride walls!

There are a lot of things in existence that are wet. The majority of these things have not always been wet. As such, liquids are very useful for facilitating the transition between the "dry state" and the "wet state". The procedure for this simply consists of exposing a dry material to a liquid. Especially, the dry to wet transition is achieved. Aside: The reverse transition (from wet to dry) can also be achieved by a process known as "drying". This keeps the universe in balance so the ratio of "wet things":"dry things" is always approximately the same.

A large subset of liquids are useful for drinking. These include, things such as milk, lemonade, and red wine. These are generally inserted into the mouth of an animal, such as a chipmunk. The animal then swallows the liquid. It then makes its way to the stomach, and from there it's history, as they say. Drinking allows the animal to not die, for a short period of time until it can find some more liquid to consume. Some liquids, unfortunately, are not useful for drinking. Such liquids include tomato sauce, and, believe it or not, tomato sauce. Or, you know, whatever! There is a big hoohah over the increasing numbers of people choosing to have liquid lunches.

The most common use of liquids is as sexual lubricant. Although some do not consider commercial lubricants "true liquids" as they are quite viscous and have similar properties to solids or gels, many impromtu sexual lubricants are indeed, fully fledged liquids. The classic example here is tomato sauce.

There are many examples of liquids. These are some of the more well known ones:

As usual, liquids were discovered by Jesus Christ in 2496 AD, in an experiment involving a Texas toast, 75 crania, and a watermelon. Their popularity blossomed after this, due to their widespread uses. Also, natural selection played a significant role, as animals that did not understand the requirement for drinking liquids were quickly eliminated from the gene pool. Within 75 years, liquids were second nature to all animals, and the "Liquid Age" was born. To this day, liquids play a huge role in all our activities, and will continue to do so as long as we both shall live.