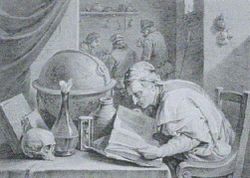 A barman researching new cocktails. Notice the variety of ingredients on his desk.

A cocktail is an alcoholic drink containing multiple ingredients, at least one of which is a liquor. Cocktails are served in a number of varieties, including girlie drinks, manly drinks, gay drinks, sexually ambiguous drinks, and bestiality drinks. Virgin drinks, much like Midwestern virgins, contain no alcohol and are available to suicide bombers in quantity when they achieve martyrdom.

It is widely believed, especially among drunks, that cocktails were invented in that curiously evil period of American history known as prohibition. Between 1920 and 1935, the United States went through a period of manic depression: the "roaring 1920s" were followed by the "Great Depression" and finally the kick-ass war of the 1940s. As any Alcoholics Anonymous member will tell you, you drink when you're happy, you drink when you're sad, and most importantly, you drink when your wife and kids just won't listen.

Consequently, the market pressure of prohibition and the unrelenting agony of life itself lead to an ever-increasing need for alcohol. To produce a greater volume of alcohol, distillers decreased the quality of liquor. The degraded taste of whiskey led many drunkards aficionados to try mixing high-proof alcohol with other substances, such as orange juice, tonic water, and urine. The results were the tequila sunrise, gin and tonic, and Budweiser, respectively.

Throughout the 1950s and 60s, the cocktail made great leaps forward in all sects of society (hee-hee, I said "sects"). College students, known to many as tomorrow's great leaders and drinkers mixed grain alcohol with koolaid, creating a fruity and delightfully intoxicating beverage. Admired President Richard Nixon would mix whiskey with whiskey, creating a sophisticated, whiskey-like cocktail, which he dubbed the double.

In the 1980s, Vietnam-era college students outgrew their do what feels good lifestyle and migrated to more adult, functional alcoholic lifestyles. This led to the popularity of the margarita, and other cleverly concealed girly drinks. Today the cocktail is a sign of sophistication, and class. 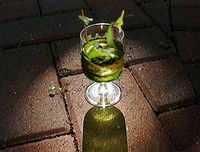 These are cocktails best served in the morning. People on a busy schedule may prefer to make the drink before bed and leave it by the night stand for a crack-of-noon pick-me-up.

A martini is one of the flashiest drinks you can drink.